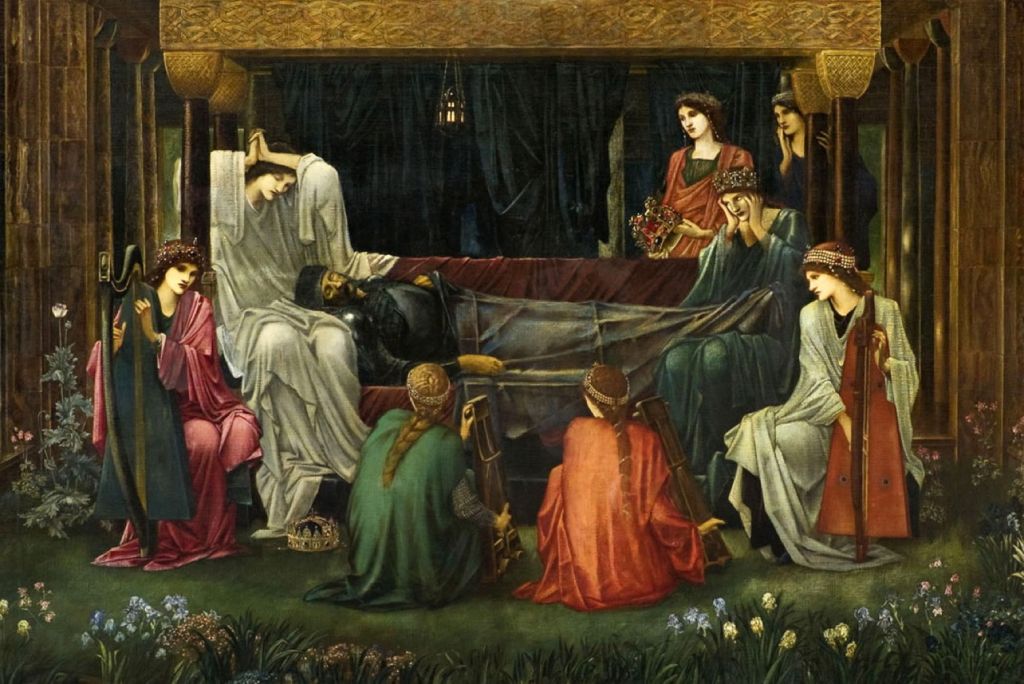 Before the middle of the nineteenth century, British narrative painting had a repertoire of themes that was only distinguished by the popularity of stories from the plays of William Shakespeare. That changed with the advent of the Pre-Raphaelites, who in addition to painting classical myth, religious stories and established Renaissance masterworks by Dante and Bocaccio, featured contemporary English poetry and Arthurian legend. Here are some examples, starting with narrative poems by Keats, Tennyson and Byron, great favourites with the educated public.

In 1848, William Holman Hunt took as his theme for this study the popular poem by John Keats, The Eve of St Agnes, written in 1819. This tells the eventful story of the elopement of Madeline and her lover Porphyro on Saint Agnes’ Eve, the night when virgins are supposed to be able to enjoy sweet dreams of their husbands-to-be. Here he shows the eloping couple creeping past drunken bodies as they leave the house, late in the story.

The story of Mariana in Shakespeare’s play Measure for Measure was reworked by Alfred, Lord Tennyson in two versions of a poem he first published in 1830. John Everett Millais’ Mariana was exhibited at the Royal Academy in 1851, the year after Tennyson was made Poet Laureate, and was accompanied by lines 9-12 of the first version of Mariana:
She only said, “My life is dreary,
He cometh not,” she said;
She said, “I am aweary, aweary;
I would that I were dead!”

Millais’ richly-coloured painting is full of symbols: fallen leaves to indicate the passage of time, her embroidery as a means of passing that time, the Annunciation in the stained glass contrasting her with the Virgin’s fulfilment, the motto ‘in coelo quies’ (in heaven is rest), and the snowdrop flower in the glass meaning consolation. Mariana’s posture is intended to indicate her yearning for Angelo.

Ford Madox Brown’s watercolour version of The Finding of Don Juan by Haidée from 1869-70 refers to Lord Byron’s poem Don Juan. This shows Haidée, a Greek pirate’s daughter, and her nurse discovering the apparently lifeless body of the hero on a beach. Brown had just completed an illustration for a collection of Byron’s poems edited by William Michael Rossetti, brother of Dante Gabriel.

The Lady of Shalott (1888) is the first of John William Waterhouse’s three paintings based on Tennyson’s popular poem of the same title. Condemned to sit weaving and never look directly at the outside world for fear of death, this shows the climax, in which the Lady has abandoned her weaving and castle. She finds a boat on which she writes her name, then floats downriver towards Camelot and the knight Lancelot, dying in the process.

By the middle of the nineteenth century Arthurian legend had become popular in Britain, thanks in part to the republication of Thomas Malory’s compilation in Le Morte d’Arthur dating from 1485.

One of the first nineteenth century artists to respond to this rekindling of interest was the Scottish painter William Dyce. This watercolour was his study for a fresco for the Queen’s Robing Room in the Palace of Westminster (Houses of Parliament). It shows a melée of knights of the Round Table paying tribute to King Arthur and Queen Guinevere (at the right), as those knights prepare to depart on their quest for the Holy Grail, the legendary chalice used by Christ at the Last Supper before his crucifixion, or possibly a cup used by Joseph of Arimathea to collect Christ’s blood.

Dante Gabriel Rossetti was particularly fascinated by Arthurian legend. He painted two versions of Arthur’s Tomb, the first (above) from 1855. In these, after Arthur’s death, Lancelot leans over his tomb and starts to make love to the mourning Queen. The decoration on the side of the tomb shows King Arthur presiding over the Round Table.

Frederick Sandys’ painting of Morgan-le-Fay from 1863-64 casts King Arthur’s malevolent sister as an alchemist-sorceress who is working on mysterious spells. Behind her is a large weaving loom, which may be a reference to other stories such as that of the Lady of Shalott.

Ford Madox Brown’s Death of Sir Tristram from 1864 shows another episode from Malory’s Morte d’Arthur, in the story of Sir Tristram and La Belle Iseult. It’s also a showpiece for a stained glass window produced by Brown’s company for the entrance hall of a Bradford merchant’s mansion.

The most appropriate painting to conclude this brief survey is Edward Burne-Jones’ Last Sleep of Arthur in Avalon, completed shortly before the artist’s own death in 1898. This brings together the four queens who were to take him to Avalon with a string quartet seated in front of Arthur’s deathbed (see the detail below), but there’s no sign of the black boat to carry him to Avalon.

Not content with these distinctively British themes, narrative painters of the mid-nineteenth century developed two novel narrative forms as well, the subject of the next articles in this series.