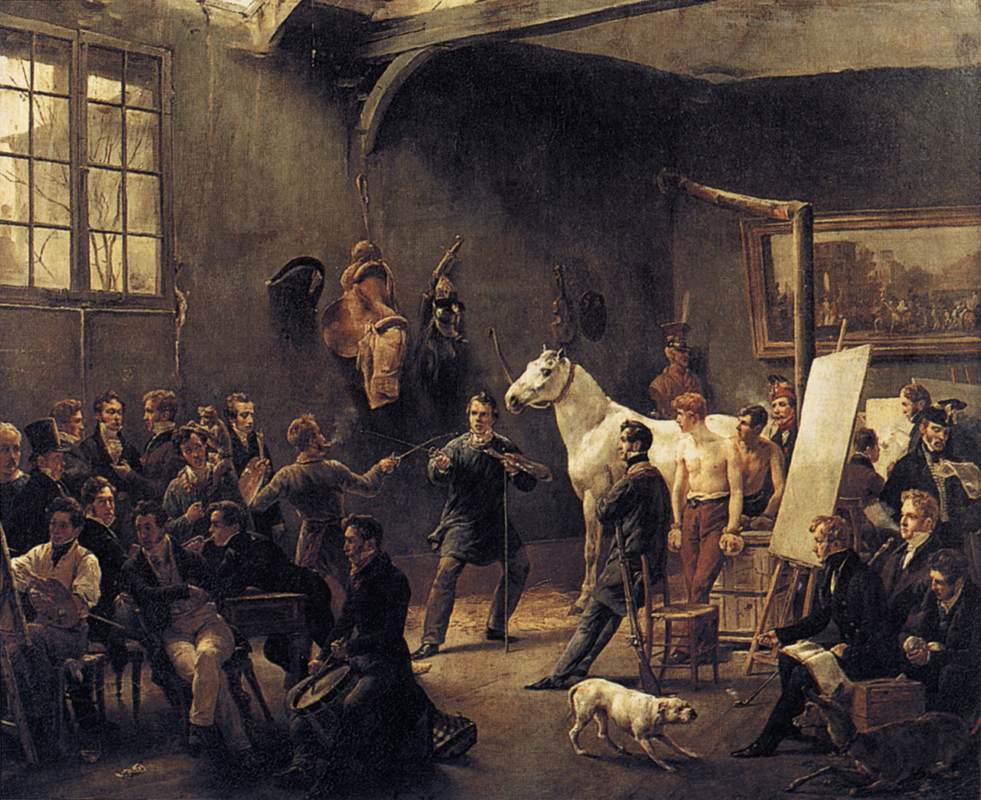 There’s one common relative of the still life painting which doesn’t readily fit into any other genre: a view of the artist’s studio. Like a still life, it can be painted at almost any time, and with even less preparation.

These don’t appear to have been popular during the Renaissance, when most studios were workshops employing a wide range of trades.

Eleanor Fortescue-Brickdale’s idealised vision of Botticelli’s studio: The first visit of Simonetta presented by Giulio and Lorenzo de Medici from 1922 imagines an event which could only have taken place before Easter in 1478, when Botticelli could have been no older than 33. The artist stands at the left, in front of an exquisite tondo which he is working on, while the craftsmen and apprentices are presumably hard at work elsewhere. Bowing to the artist at the centre is Giuliano de’ Medici, who is accompanied by Simonetta Vespucci, wearing the green dress. Behind her is Lorenzo de’ Medici, often known as Lorenzo the Magnificent, and behind him are Giovanna Tornabuoni and her attendants. The view through the window shows the Palazzo Vecchio in the centre of Florence.

Cornelis Gysbrechts was even more selective in what he showed in this trompe l’oeil of A Cabinet in the Artist’s Studio (1670-71).

Perhaps more revealing are paintings intending to show Apelles’ studio from ancient Greece, which have been composed in more contemporary terms.

Nicolas Vleughels’ Apelles Painting Campaspe (1716) shows a servant leaning down to adjust a cushion on which the model Campaspe’s right foot rests. Apelles concentrates on the painting in progress, while Alexander and one of his colleagues watch, whispering to one another.

Tiepolo’s Alexander the Great and Campaspe in the Studio of Apelles (c 1740) perhaps reflects his own troubles with ennui among his models, with Campaspe, her maid, and Alexander looking thoroughly unimpressed with the artist’s slow progress, working at an unusual and highly anachronistic tondo.

At the other extreme are paintings of artists’ studios from the middle of the eighteenth century, where they appear crowded with visitors and assistants.

Johann Georg Platzer’s The Artist’s Studio from 1740-59 features quite a crowd. Those in the centre foreground seem interested in purchasing a painting from the artist, who’s trying to paint a bored model at the left. At the far right an assistant is using a muller to prepare fresh oil paint, and in the right background there’s a life class taking place, presumably for the apprentices in training.

In Jan Josef Horemans the Younger’s In the Painter’s Workshop (before 1790), the artist is busy painting a portrait in the left background. The assistant mulling oil paint in the foreground is being provided with liquid refreshment, and there’s even a dog at the right edge.

One of the first artists to use a painting of his studio to challenge the viewer was Horace Vernet.

Long before Courbet’s possibly allegorical painting of his studio (below), Vernet’s was just as crowded, rich in stories, and puzzling. In the centre, two young men fight one another with swords by a white horse, which is tethered to the wall. Immediately in front of the white horse is a pair of boxers, and another young man sits on the back of a chair to watch the fencing, holding a rifle against the left side of his body.

In the left background a couple of pupils are actually engaged in painting at easels, but the most prominent easel in the room is completely ignored by those present. Another painter is at work at the far left, apparently talking with three young men who are watching, and accompanied by a drummer. Another small group of young men is engaged in discussion against the wall to the left.

There are also pets and props: an angry white dog in the centre foreground, a small pet monkey in the left background, saddles hung on the wall in the centre, and a large oil painting is on the back wall.

Courbet’s The Painter’s Studio is one of the great ‘problem paintings’ which has been extensively analysed and ‘explained’ as allegory. Those classical approaches have recently been challenged by Herbert, who argues that trying to determine whether it’s allegorical or realist is asking the wrong question.

The figures in the painting show individuals who had influence over Courbet’s life and artistic career. At the right are the artist’s friends and admirers, including his first patron Alfred Bruyas, critics Champfleury and Baudelaire who had been so positive in their reactions to his work, and others. At the left a man with dogs has been interpreted as an allegory of the Emperor Napoleon III. Behind him are figures who were long assumed to be allegorical, but Hélène Toussaint identified them as contemporary people, most of whom had been supporters of the Emperor’s regime.

At the centre of the painting is a canvas at which Courbet himself is shown working. The nude model beside him might appear contradictory, given that the work in progress is clearly a landscape. This has been interpreted as indicating how Courbet has shunned the academic art tradition for the new (and increasingly popular) genre of the landscape.

Courbet has shown considerable detail in the painting within the painting, making it clear that it’s a landscape set in the countryside around his home town of Ornans. This makes obvious reference to his origins and where he considers is still his home.

A decade later, John Ferguson Weir’s first major painting was An Artist’s Studio (1864), in which the artist in question is his father, not himself. It has the air of meticulous veracity, and was exhibited, sold, and brought the painter’s election as an associate of the National Academy.

During the early and lean years of Impressionism, paintings of the artists and their studios weren’t uncommon.

These may have been prompted by Henri Fantin-Latour’s Studio at Les Batignolles from 1870, showing his friend Manet painting with a small group of friends peering over his shoulders. Its debt to Courbet’s The Painter’s Studio is palpable. The figures were identified by the artist as:

As a window into history, this is unique, showing Manet, Renoir, Zola, Bazille – who was to die that November in the Franco-Prussian War – and Monet in a fictional snapshot; it also inspired Bazille to paint a response and seems to have struck a chord with both artistic circles and the critics of the day.

Although Fantin has integrated his figures better than in earlier paintings, this begs many questions such as what are they all doing together, and whether the painting is about homage to Manet (who was still very much alive), or the meeting of a gentleman’s club. Bridget Alsdorf writes that it “evokes an atmosphere of anxious enclosure”, which is relieved slightly by the inclusion of a little Japoniste pottery, and the statue of wise Minerva pointing down approvingly at Manet’s canvas.

Frédéric Bazille responded with his Studio on the Rue La Condamine, which is in almost every respect the exact opposite of Fantin’s painting. Of the six figures included, only one (the pianist) isn’t interacting with others. The space is wide open instead of closed in, and the scene appears natural rather than posed or assembled from individual studies.

Within a few months, the group gathered in Fantin’s imagination had scattered with the onset of war. Manet enlisted and served in Paris, Bazille joined the infantry and went with them to his death, while Monet refused and fled with his family to Britain.

Tomorrow I will resume with paintings of the artist’s studio following the Franco-Prussian War.