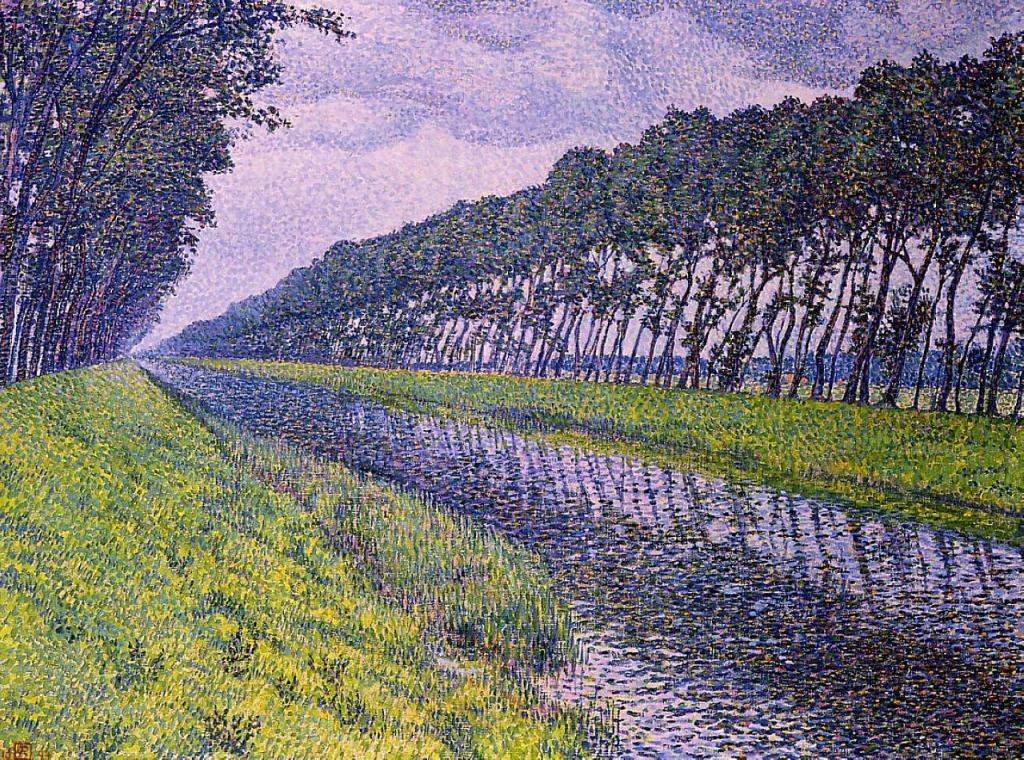 Rhythm may seem a strange property in paintings, something we more commonly associate with a repeated pattern of sound. But when a painter uses repeated forms, usually regularly spaced in the picture plane, that too is referred to as rhythm. This weekend I look at some examples of the use of rhythm in paintings, and consider its purposes and development.

One obvious effect of more florid rhythmic passages is the establishment of patterns which can amount to optical effects. These are seen in paintings from the Renaissance and the twentieth century.

In Albrecht Altdorfer’s Victory of Charlemagne over the Avars near Regensburg from 1518, close rhythm in weapons results in distinctive optical effects which probaby modelled what was seen in real life. In the foreground lances are lowered progressively, as cavalry charge from their ranks at the left into the mêlée at the right, and they are echoed in similar passages involving other weapons. Its inclusion of cannons is of course a glaring anachronism, as they didn’t appear in Europe until after 1300, around five centuries after this legendary battle is claimed to have taken place.

More recently, rhythm in forms recessing into the image have been used to strengthen linear perspective and add depth.

In Édouard Detaille’s Le Rêve (The Dream) from 1888 the tripods formed from rifles recede rhythmically towards the rising sun, making this plain look almost infinite in its depth.

Architectural structures can also be strongly rhythmic, as shown in John Martin’s Belshazzar’s Feast from 1820. This again adds to their impression of grandeur.

The Impressionist landscape painters of the late nineteenth century found rhythm in trees in some of their views. Although never common, there are some marvellous examples of rhythm in the trunks of trees serving the common purpose of adding depth.

Rest along the Stream, Edge of the Wood (1878), one of Alfred Sisley’s finest paintings, and one of the great landscapes of the century, is a good example. It features multiple stands of trees, each of a different species: the line of birch trees in the foreground beats a regular rhythm which recedes towards the vanishing point. On the opposite bank five pollards are more irregular and enhance natural appearance. The lines of the trees, stream, and the gash of sky all lead the eye to the distant bridge, and the figure of a woman, her back against the foot of one of the birches in the foreground.

Late in his career, Sisley found a more complex rhythm sweeping along the banks of The Canal du Loing at Moret (1892), in this thoroughly wintry scene.

A few artists have made rhythm a central feature of their style. Ferdinand Hodler started in his early landscapes, which were moving away from the initial influence of Alexandre Calame.

Hodler’s Road to Evordes from about 1890 is an excellent example of the use of rhythm and symmetry to reinforce depth.

For the landscape artist, trees are the most obvious forms which can be arranged rhythmically. In views of gardens, though, fence palings can be invaluable.

The fences in Theodor von Hörmann’s Summer in the Garden, Znaim, from about 1893, crisscross the picture plane in several orientations. In the left foreground, one section is an aid to his perspective, while several other sections cross the canvas, to divide the different depth zones of the image. Being relatively small forms, these fences merge into the rich vegetation rather than overpower it.

Painting rhythmic forms using Divisionist technique, or ‘pointillism’, must be both technically demanding and painstaking to the point of exhaustion. Given the size of Théo van Rysselberghe’s painting, it’s a colossal achievement.

The eycatching geometry of van Rysselberghe’s Canal in Flanders (1894) combines radical perspective projection, the intense rhythm of the trees, and meticulous reflections, together making this one of the great Divisionist paintings.

Looking further back at landscape paintings shows some more subtle uses of rhythm.

Painted within a year or so of setting up his first studio, Thomas Gainsborough’s Wooded Landscape with a Man Talking to Two Seated Women (c 1745) is an impressive oil painting which established two themes which were to recur in many of his landscapes: rhythmic forms in tree canopies and clouds, and a particularly gnarled old tree in the foreground.

Martín Rico’s Washerwomen of Varenne (1865) uses washerwomen for its rhythm. This group of fifteen women, some with babies and children, are on the bank of the local river, where they transform his landscape with their activity and the rhythm of their figures.

Camille Pissarro’s marvellous painting of Hoar frost at Ennery from 1873 features rhythmic cast shadows of trees, which are rather less insistent than the treetrunks themselves.

Sisley’s Boat in the Flood at Port-Marly from the floods of 1876 features a rhythmic pattern in the leafless pollards standing proud of the water. Although not exactly irregular, it’s sufficiently complex to warrant comparison with rhythms in the music of the late nineteenth and early twentieth centuries, perhaps.

Pissarro’s complex rhythms in trees came to dominate some of his paintings, such as this famous view of the Côte des Bœufs, Pontoise from 1877. These barren trees break up the red-roofed houses of the town beyond, superimposing their diruptive rhythm.

Little did he realise what Claude Monet was about to do with poplars.