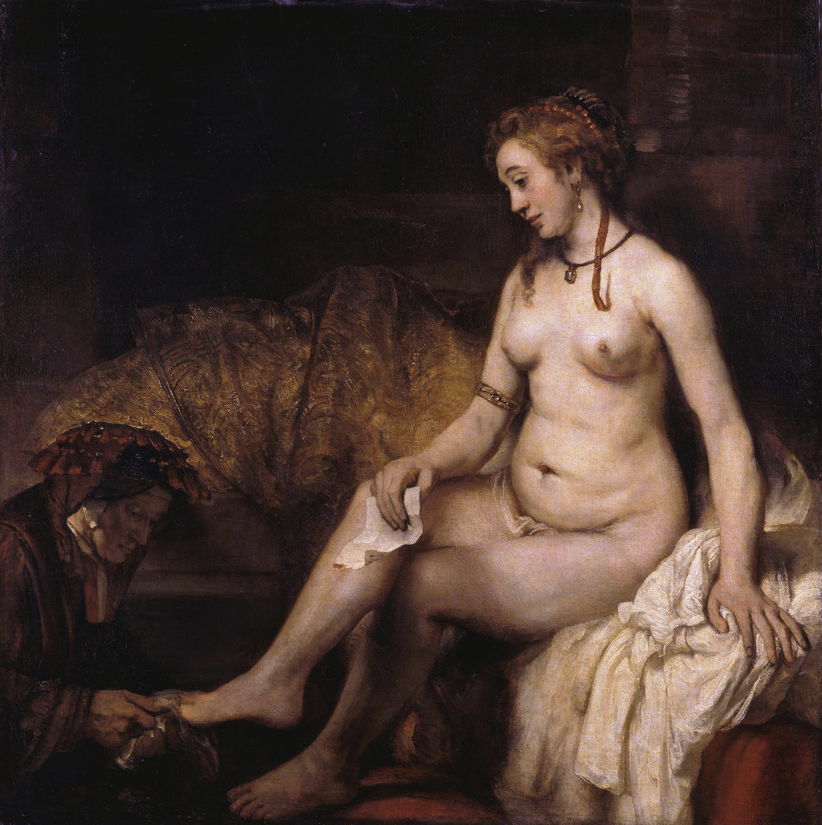 Everyone looks at faces in paintings, and we seldom look at the feet at the other end of the body. Today and tomorrow I’m going to show a selection of paintings in which reading the feet is valuable for the additional information which they provide, sometimes even for the surprises they bring.

Before the advent of cars and cheap public transport in the twentieth century, most people travelled on foot. People migrating across Europe, Roman legions expanding the empire, tinkers moving from village to village, and painters all tended to walk. In March 1880, Vincent van Gogh walked nearly 50 miles (80 kilometres) to visit Jules Breton, Alfred Sisley earlier walked for several days through the Forest of Fontainebleau, and Paul Cézanne walked daily into the countryside around Aix-en-Provence to paint. Feet and what you wore on them were among the defining properties of each person.

Go back to the ancient civilisations around the Mediterranean, and most people most of the time remained barefoot.

Notable exceptions to this were the gods, who were sufficiently divine as to use sandals. Notable among those, as seen in this detail from Botticelli’s Primavera (c 1482), was Mercury, the son of Maia (who gave her name to the month of May, hence his association with Spring) and Jupiter. As the Messenger of the Gods, he is distinguished by his staff or caduceus and special sandal-boots, often shown with wings attached.

Lionel Royer’s painting of Vercingetorix Throwing down His Weapons at the feet of Julius Caesar from 1899 shows an interesting array of footwear from the Roman Empire. Caesar wears sandals (without wings), and Vercingetorix some sort of riding boot. But the other barbarians are shown barefoot, compared against Roman soldiers who have combat sandals.

Footwear also played an important part in some classical myths. Theseus’ father King Aegeus of Athens abandoned his mother Aethra, leaving only his sandals and sword hidden under a large rock.

When Theseus came of age, his first major task was to discover his father’s hidden sword and sandals, and set off in search of him. This is shown in Laurent de La Hyre’s Theseus And His Mother Aethra from 1635-36, although the king’s sandals appear more contemporary than classical.

Gustave Moreau’s painting of the encounter between Oedipus and the Sphinx from 1864 engages in footplay too. Despite the Sphinx’s beautifully human head and bust, her hindfeet are thoroughly feline. Below her are some of the remains of her victims, including a solitary foot.

Feet, and their care, play a significant and very visual part in Christian teaching, when Jesus Christ washed the feet of his disciples at the start of the Passion.

This is shown in Tintoretto’s large Christ Washing the Disciples’ Feet which he painted for the Scuola di San Marcuola in Venice in 1548-49.

The disciples are gathered in a palatial room, around a large refectory table which looks appropriate for the Last Supper, an event which appears to be depicted in a painting hanging on the wall. In the right foreground, Jesus Christ is washing the feet of those disciples one by one, with them standing in turn in a shallow wooden tub. Elsewhere, disciples are seen pulling one another’s boots off, and a hound sits alert in the centre foreground. Tintoretto opted for a style of high leather boot which might have been worn when riding during the colder months in northern Italy.

The bathing of feet provided Rembrandt with the scene for his famous painting of Bathsheba with King David’s Letter from 1654. Here Bathsheba considers the king’s invitation to adultery while her maid dries her feet.

Feet can be both surprising and decisive in reading a painting. In Arnold Böcklin’s depiction of Sirens from 1875, their brightly coloured birdlike feet are more of a shock than the three human skulls, and confirm that the two figures may look like women down to the waist, but they’re every inch a siren.

An apocryphal story which grew popular during the late nineteenth century is that of Salome and the death of John the Baptist. Both of Lovis Corinth’s paintings from the turn of the century make dramatic use of feet in their narrative.

Corinth’s second Salome from 1900 is the more finished and detailed. The severed head of John the Baptist is at the centre of the canvas, with four unsevered heads towards the upper edge. There’s stark contrast with the feet, representing the rest of the saint’s body directly below his head.

In my last painting from this first selection, it’s the absence of a foot which is quite startling. The man seated in the middle of Hans Andersen Brendekilde’s While Reading the Newspaper News from 1912 has only one shoe: his right lower leg has been replaced with a crude wooden prosthesis, a ‘peg leg’.

Tomorrow I’ll look at the depiction of feet and footwear as social history.