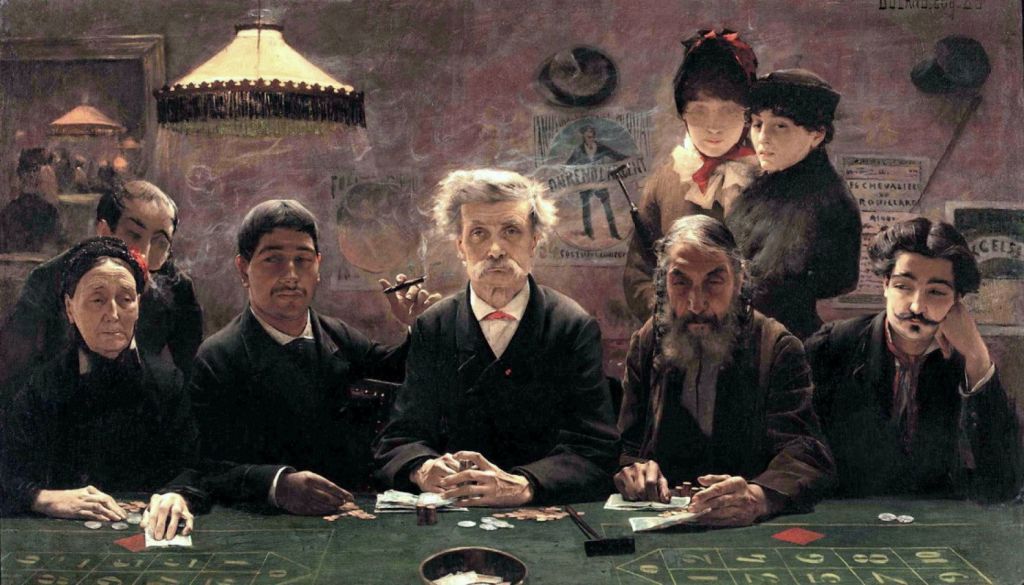 Prior to the middle of the nineteenth century, gambling had generally been depicted in painting as sinful, a step on the road to damnation, vulnerable to cheats and crooks, the preserve of the reckless, poor and despicable. Its narrative was that of ruin, not redemption.

Although Gustave Courbet’s portrait of the operatic singer Louis Gueymard (1822–1880) as Robert le Diable (1857) shows the last scene in Act 1 of Giacomo Meyerbeer’s opera Robert le Diable (1831), its message is clear. In this scene, Gueymard’s character Robert gambles away his entire estate on dice; in the opera this is marked by the aria L’or est une chimère: ‘gold is but an illusion’.

Albert Anker turns to classical times to put his spin on gambling games in his Knucklebone Players (1864). Three youths are here playing a game of greater skill, but which was still frequently the basis of gambling. The distinguished-looking men in the background are hardly the sort to frequent a gambling den, are they?

Dante Gabriel Rossetti is less convinced. In his watercolour of Hesterna Rosa from 1865, he shows a moment from the contemporary play Philip van Artevelde, written by Henry Taylor in 1834. Van Artevelde was a Flemish patriot who lived between about 1340-1382, who led the Ghent rebellion in 1381, only to be crushed to death in battle the following year.

In Taylor’s play, van Artevelde has a relationship with a woman of lower class; in this scene, his lover has paused to reflect on her life, whilst he plays dice with a friend. The painting’s title means yesterday’s rose, and draws on the theme of the fallen woman, which was so popular with Rossetti.

Unlike Murillo’s young boys, those in Eugène Siberdt’s The Little Gamblers (1876) aren’t particularly poor, nor are they underprivileged. A satchel, open book and slate at the lower right confirm that at least one of them is still attending school and literate, but they still engage in a game of cards in the afternoon sunshine.

William Quiller Orchardson sounds a more cautionary note in his Hard Hit (1879). The fashionably-dressed young man about to open the door on the left is walking away from a group of older villains, who have stopped at nothing (including perhaps cheating) to beat him repeatedly at cards, and have relieved him of his wealth.

A Venetian Gaming-House in the Sixteenth Century shows far more opulent and fashionable surroundings, but is a scene of confrontation between two young men at the card table of this gambling den in Venice. The man seated on the left, whose family appear to be backing him, has accumulated substantial winnings, and is reaching across the table for more. The man standing on the right, who seems to be losing badly, has an accusative look, and is clearly unhappy with his opponent’s success.

Both men are armed, and under the table is a large collection of cards which may have been involved in a cheat.

In the sixteenth century, gambling took place in Venice in private premises. But in 1638, the city fathers opened Europe’s first public casino in a wing of the Palazzo Dandolo, known as Il Ridotto. It aimed for the most affluent, with high stakes and a strict dress code, requiring tricorn hats and masks at its tables. It closed its doors in 1774, to preserve “piety, sound discipline and moderate behaviour”.

Of all these paintings, the Caravaggio included, it is Jean-Eugène Buland’sLe Tripot (The Dive) from 1883 which is my favourite.

Set in a seedy, downmarket gambling den, it is a group portrait of five hardened gamblers at the table. Each is rich in character, and makes you wonder how they came to be there. A little old widow at the left, for example, looks completely out of place, but is resolutely staking her money. Looking over her shoulder is a man, whose face is partially obscured. Is he perhaps a son, or a debtor?

A young spiv at the far right is down to his last couple of silver coins, and looks about to lose them too. The air is thick with smoke, the walls in need of redecoration, and a pair of young streetwalkers prowl behind them, looking for a winner who will spend some of their cash on them.

Although their game appears to be roulette, the old and burnt-out croupier in the centre doesn’t appear to be spinning any wheel. The markings on its grubby green baize resemble those for roulette, but the numbers only go from from 0 to 10.

Gambling had broken out of those dives, and had come to obsess many members of society. Anna Palm de Rosa’s atmospheric painting of A game of L’hombre in Brøndum’s Hotel from 1885 shows a late-night session of this popular card-game between two couples staying at this hotel in Skagen, the remote fishing village which at the time was the summer home of the Danish (and other Nordic) Impressionists.

As in the Dutch Golden Age, gambling is here associated with both alcohol and tobacco.

L’hombre or Ombre are not the choice of more modern, hardened gamblers like those in Félix Vallotton’s Poker session, painted in 1902. Tucked away in a plush back room behind a club or bar, these four are in full evening dress, playing for stakes which could be breathtaking and bankrupting.

In the late nineteenth century, fast railway connections from cities like Paris to the Mediterranean coast of France led to the latter’s rapid growth and transformation. With those visitors came the need for their entertainment, and casinos were built to drain rich tourists.

The famous casino at Monte Carlo opened its doors in 1863, taking over from the original establishment which had started there in a small mansion in 1856. This colour lithograph by Sem shows Roulette in the Casino, and is taken from his second series of scenes in Monte Carlo, from about 1910.

Sem’s wicked caricature shows one gambler operating a successful system, and piling up his winnings as he analyses the spin of the wheel in his notebook. The two near-identical croupiers are watching him carefully, as affluent onlookers mill about behind.

This increasingly attractive vision of the casino was promoted by prints such as Gwendolen Harleth at the roulette table, an anonymous illustration to George Eliot’s novel Daniel Deronda published in a special limited edition in 1910. It took another half century for the likes of James Bond to promote the casino further, though.

Few painters seem to have been impressed by the glittery image which casinos tried to manufacture during the late nineteenth century. Although not all have depicted gambling as a dangerous sin, there has been a fairly consistent consensus that gambling is not good, and all too often leads to financial disaster, and destitution.