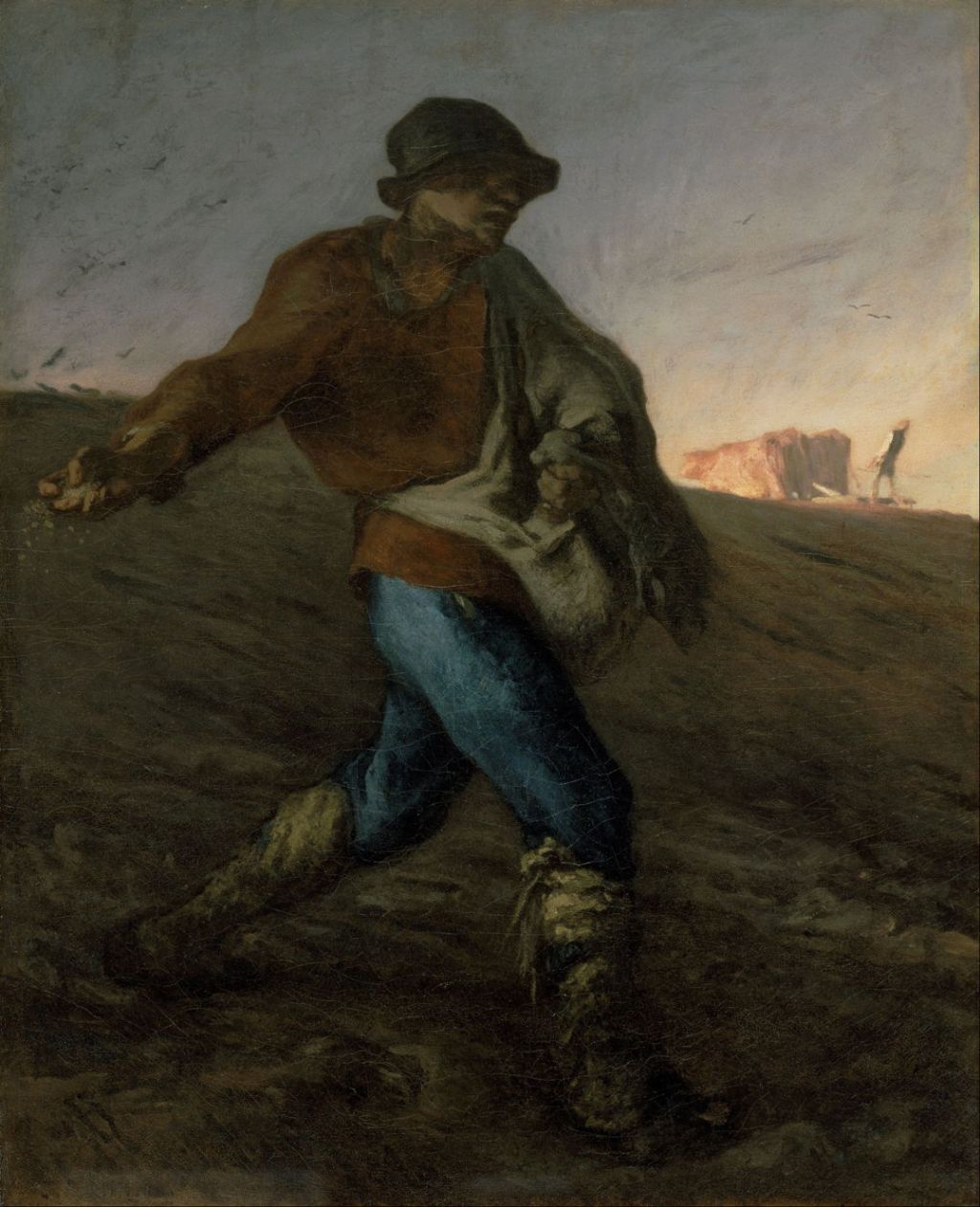 Having just looked at the life and work of Jules Breton, I come to attempt the same for the other great French ‘social realist’ painter of the mid-nineteenth century, Jean-François Millet (1814–1875).

I don’t see art as competitive, but those who feel it necessary to make comparisons, and claim whose work is ‘better’, often rate Millet more highly than Breton. Looking at their paintings, I think that they are so different that it is like trying to compare da Vinci with Rembrandt – a meaningless exercise.

Millet was also from the north of France, in his case a hamlet near the coast by Cherbourg, at the northern tip of the Cherbourg peninsula. Born in 1814, at the end of the Napoleonic period, he was raised in a farming family, and lacking aptitude at farming was sent to study with a portrait painter in Cherbourg when he was nineteen. He progressed to another local studio, and in January 1837 moved to Paris, where he studied at the École des Beaux-Arts under Paul Delaroche, one of the leading history painters of the day.

Académie masculine (Male Nude) dates from about 1837, and Millet’s studies in Paris. Despite this proficiency in painting from life, the funding provided to support him in Paris was withdrawn in 1839, and the first painting which he submitted to the Salon was rejected. He also made two unsuccessful attempts to win the Prix de Rome, in 1838 and 1839. He was, though, successful with the portrait which he submitted to the Salon the following year, and returned to Cherbourg to work as a portraitist.

Millet seems to have been a successful painter of portraits, and examples such as this pastel Portrait of Louis-Alexandre Marolles from 1841 show him to have been thoroughly competent if not rather good.

That year he married, and the couple moved to Paris to try to establish his career there. However, his submissions to the Salon in 1843 were rejected, and his wife died of tuberculosis, so in 1845, Millet moved to Le Havre, further east along the Channel coast. He did not stay long there, returning to Paris after a few months.

Millet extended his genres in the hope of success at the Salon. Diana Resting (c 1845) is a small and painterly sketch of the virgin goddess of hunting yawning, her bow and quiver of arrows beside her, and her right foot dangling in a pool. Behind her is another figure, sleeping with their back towards the viewer: it is unclear who that might be, and what Millet’s narrative might have been.

The Temptation of St Anthony (1846) is another very painterly sketch of a classical and popular story. Saint Anthony’s head is thrown back, as he looks to heaven for support, as a wanton near-naked woman embraces him. Millet’s composition has an awkwardness in the placement of hands: that visible just below the saint’s chin must be his, and appears to be the left, which doesn’t fit comfortably with the orientation of his body.

Millet also started to paint country scenes involving local people, such as his Retreat from the Storm (c 1846). This may have resulted from his friendships with Constant Troyon, Théodore Rousseau, and others who would later form the Barbizon School, and with Honoré Daumier, who had a notoriously loose style but was a fine draughtsman of figures.

Here, a woman and her daughter are fighting their way through a gale, as they struggle to reach shelter. The woman is clutching a bundle of sticks to use as firewood, both figures are lightly-clad in tattered clothes, and the young girl is barefoot.

Millet’s study for Mercury Leading the Cows of Argus to Water was probably painted between 1846-1848. Its narrative basis appears to be the story of Jupiter and Io from Ovid’s Metamorphoses, which I have previously examined in detail. Mercury is leading a white cow, presumably Io herself, away from the sleeping Argus. Ovid’s account has Mercury decapitate Argus, which Millet does not depict.

In the late 1840s, Millet finally started to be more successful at the Salon. He had paintings accepted in 1847 and 1848, and in the latter year one of those was purchased by the state.

The story of Hagar and Ishmael (c 1847) is drawn from the book of Genesis in the Old Testament. Hagar was an Egyptian, who was a maid to Sarah, Abraham’s wife; when her mistress was unable to conceive, Hagar was given to Abraham, and gave birth to his first child Ishmael. When Sarah later conceived, the two women fell out, leading to Hagar and Ishmael being cast out into the wilderness of Beersheba.

Millet’s very painterly sketch shows mother and son fighting for their survival in the wilderness, after they had been cast out. According to the book of Genesis, God heard her cries and provided them with a well to drink from, and Ishmael went on to found the tribe of Ishmaelites.

In the late spring of 1849, Millet and his growing family left Paris, which was in the throes of a cholera epidemic, and moved to the village of Barbizon, where he and his friends were forming the Barbizon School. Millet, Rousseau, and Daubigny became its leaders, and the best-known, and there were a further dozen or more artists who were part of the school during its existence.

The following year he entered into a contract with a patron, Alfred Sensier (1815-1877), which ensured a reliable supply of materials and an income, in return for drawings and paintings; this was not exclusive, and allowed him to sell work to others too. Sensier was later to write Millet’s biography, which was published after they had both died.

Millet’s The Sower was completed in 1850 and shown at the Salon that year; it has since been recognised as his first real masterpiece. It shows an agricultural worker striding across a field, sowing seed for the summer’s crop. In the distance to the right, and caught in the sunlight, is another worker ploughing with a pair of oxen. Behind the sower is the inevitable flurry of birds, trying to eat any seed left on the surface of the ground.

Millet revisited this motif in several later paintings, and in them inspired Vincent van Gogh’s The Sower (1888), one of the major paintings which he made of country people. After this success, Millet started work on his Harvesters Resting (Ruth and Boaz), which he completed in 1853.

Millet was a prolific draughtsman, and around 1851 appears to have been involved in a collaborative project with the Swiss artist Karl Bodmer (1809-1893) to illustrate the gripping yarn of Jemima Boone and the Callaway sisters, probably for a popular edition of James Fenimore Cooper’s fictionalised account in The Last of the Mohicans (1826). Millet’s drawing in charcoal and brown chalk of The Rescue of the Daughters of Daniel Boone and Richard Callaway (1851) shows a scene late in the story, which took place on the Kentucky River in the Spring of 1776.

A raiding party of American Indians, mainly Shawnee and Cherokee, captured the three girls. On the third day after their abduction, a rescue party organised by Daniel Boone caught up with them, killing two of the captors. The others fled, allowing the girls to be taken back to their homes in Boonesborough.

Capture of the Daughters of D. Boone and Callaway by the Indians (1852) is a lithograph produced from one of Millet’s drawings of the earlier part of the story. For his part, Bodmer produced at least one oil painting of the story. Bodmer had painted American Indians in North America, and joined the Barbizon School; his name was commemorated by Claude Monet, who painted a tree in Fontainebleau Forest under the title of The Bodmer Oak (1865).