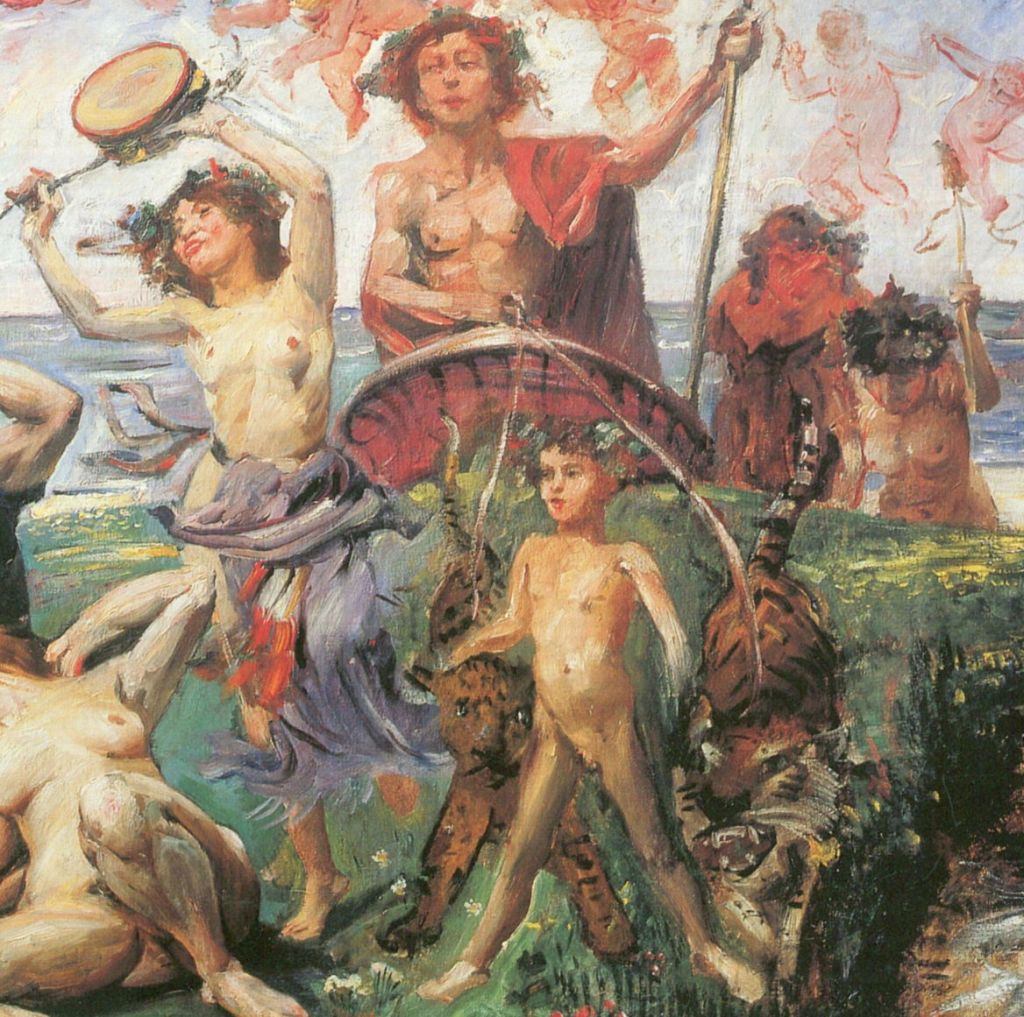 This last article – for the time being – in my series on the life and work of Lovis Corinth looks at some of his narrative paintings across his entire career. I have generally excluded his religious works, in particular his many paintings of the Crucifixion, which really merit an article to themselves.

Corinth’s first really successful narrative paintings were the two that he made in 1890, showing the Old Testament story of Susanna and the Elders – a subject which he returned to as late as 1923. Identical in their composition, they have an unusual setting, as this scene of the two elders acting as voyeurs is more commonly shown in Susanna’s garden, or even woodland, as described in the original story.

Towards the end of his time in Munich, Corinth painted this first version of another famous story, this time the temptations which Saint Anthony was reported to have undergone, a theme which I have examined in detail here and here.

This is more typical of Corinth’s mature work, with many figures crammed into the composition in a raucous and highly expressive human circus. Although very painterly in parts, he is careful to depict fine detail in the joint of meat being held by Saint Anthony, and the saint’s amazing face.

Corinth’s narrative paintings reached their peak at the time that he moved to Berlin, in this second version of Salome. Not only was it highly influential on a wide range of other artists and their arts, but its use of gaze is remarkably subtle and its success based on being implicit rather than explicit.

Corinth was not as restrained when he tackled the story, from Homer’s Odyssey, of Ulysses Fighting the Beggar. He packs a crowd in, gives every one of them a unique and intriguing facial expression, and then pits Ulysses against the beggar in almost comic combat. Note too how his figures are becoming looser.

If Corinth’s first Temptation of Saint Anthony showed a human circus, the rest of the animals and performers came for this his second. Those figures are now becoming significantly more painterly too, and the Queen of Sheba has similarities with his earlier figure of Salome.

Of all his narrative paintings, his Homeric Laughter must be the most complex. It refers to a story within the story of Homer’s Odyssey, which is told by the bard Demodocus to cheer Odysseus up when he is being entertained by King Alcinous on the island of the Phaeacians. It is another raucous spectacle, in which we join the other gods in seeing Mars and Venus caught making love.

Corinth turned to narrative after his stroke, painting The Blinded Samson with its obvious autobiographical references. Samson’s body is painted more roughly, although the artist has taken care to give form to the drops of blood running down Samson’s cheeks. This version of Samson contrasts with his others in showing the man alone.

Less than two years after his stroke, Corinth returned with another elaborate and wild painting, this time depicting the story of Ariadne on Naxos. I have examined this in detail here, and looked at some other versions here.

This painting is another highlight of Corinth’s career, particularly as it condenses several different moments in time into its single image, using multiplex narrative; that might have been fairly commonplace during the Renaissance, but was exceptional for the early twentieth century. And it works wonderfully, too.

Late during the First World War, Corinth moved on from crowded and vivacious narrative paintings, and became more autobiographical again. The huge and stark figure of Cain heaping rocks onto the body of his brother Abel fits with Corinth’s growing horror and despair as the war went on.

Corinth’s last painting of Susanna and the Elders is a remarkable contrast with his first, from over thirty years earlier. He still avoids a pastoral or garden setting, and his figures are now fading forms in patches of colour and texture.

For what must have been his last great narrative painting, Corinth looked to the events leading up to the fall of Troy, in particular The Trojan Horse. The great walls and towers of the city appear as a mirage, their forms indistinct from the dawn sky. Although roughly painted in using coarse marks, the soldiers and the horse itself are more distinct in the foreground.

As with his self-portraits and nudes, Corinth’s style evolved throughout his career, but he also continued to paint stories right up to the last. Together, they form one of the most sustained and brilliant series of narrative paintings of any artist since Rembrandt.