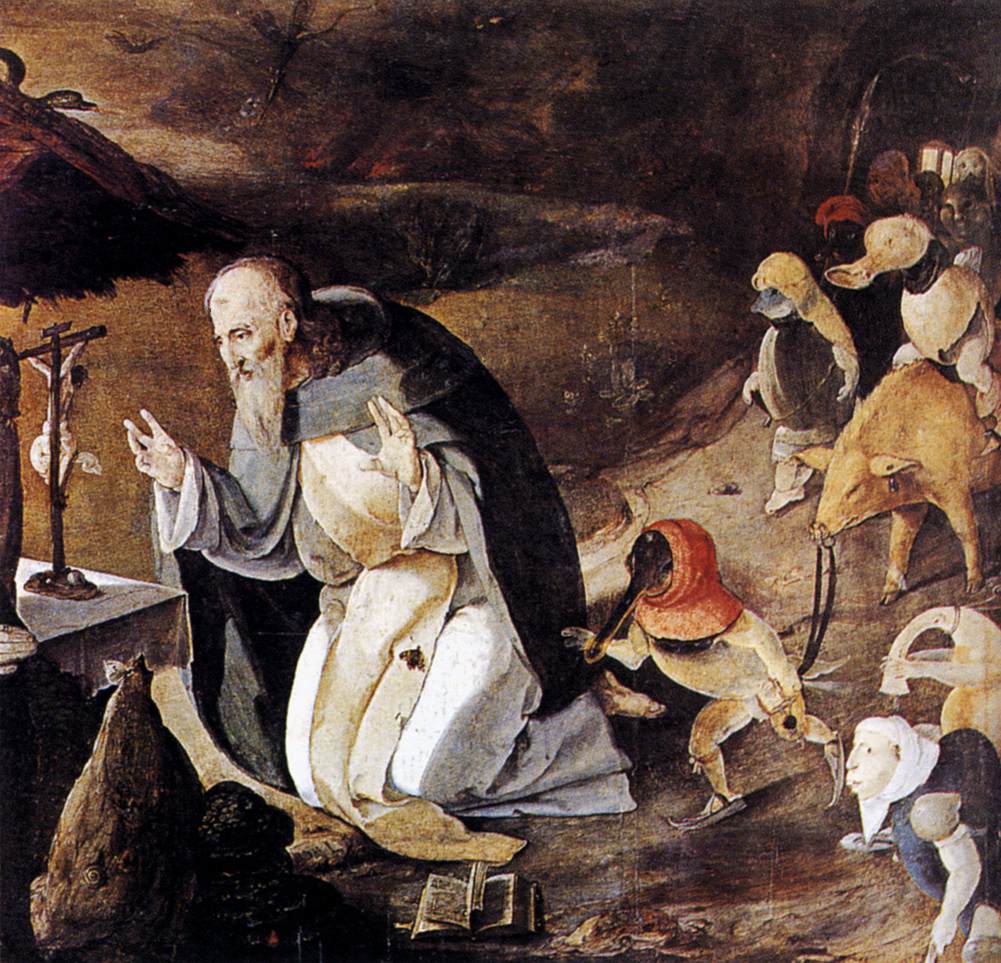 Paintings of scenes from the hagiographies of Christian saints have been enduring favourites, particularly for those churches dedicated to each saint, and for sponsors named after a saint. The lives of some saints are sufficiently complicated as to offer the artist a choice of different scenes, but in the case of Saint Anthony the Great (of Egypt, the Abbot, etc.), paintings are almost completely confined to his temptation by the devil.

Saint Anthony was born in 251 CE to wealthy parents in Lower Egypt. When he was 18, his parents died, and he became an evangelical Christian. He gave his inheritance away, and followed an ascetic life. For fifteen years he lived as a hermit. During this time the devil fought with him, afflicting him with boredom, laziness, and dreams of lustful women. Then the devil beat him unconscious.

Friends found him and brought him back to health, so he went back into the desert for another twenty years. This time the devil afflicted him with visions of wild beasts, snakes, scorpions, etc., but again he fought back. He eventually emerged serene and healthy. He went to Alexandria during the persecution of Christians there, to comfort those in prison. He returned to the desert, where he built a monastic system with his followers.

His attributes are a bell, a pig, a book, the Tau cross (like a capital T), sometimes with a bell pendant. He is commonly shown being tempted in a wilderness, often by naked women, and is associated with fire (“Saint Anthony’s Fire”).

The visionary nature of his temptation, and the temptations offered him, give a painter a wonderful opportunity to exercise their imagination, and to include content which would otherwise be excluded from places of worship. I have just given a detailed account of Bosch’s masterwork, his triptych showing The Temptation of Saint Anthony (c 1500-10), which is to my mind the wildest, most fascinating, and greatest painting of this saint.

This pair of articles looks at other notable paintings of the same motif, to see in particular what influence Bosch’s paintings had on others, and how his Lisbon triptych stands in comparison. This article covers paintings before 1560, and the next will cover the period from 1570 to the start of the twentieth century.

Painted in 1430-32, Stefano di Giovanni’s St Antony Beaten by the Devils identifies the saint by his Tau crucifix. Three devils, clearly fallen angels by their wings, are beating him with clubs. Those devils are fairly conventional figures, part animal and part man, with horns.

The Master of the Osservanza’s painting from about the same time, around 1435, has a similar simple landscape, but here Saint Anthony is being tempted by a woman. She is angelic, by her wings, pretty, but fully clad, and modestly so too.

The miniature Saint Anthony and the Lobster Devil illustrates the source of many hagiographies, Jacobus de Voragine’s La Légende Dorée (Legenda aurea, Golden Legend), which was often used as a reference by artists. The devils shown tormenting the saint have become much more imaginative in form. One is based on a lobster, two have accessory faces in their abdomens, and they are starting to depart from nature.

Michelangelo’s The Torment of Saint Anthony (c 1487–88) continues that trend. Saint Anthony is now being held aloft by ten or so devils, including a weird fish with many spines and a trunk-like snout. The devil at the lower left of the group has breasts and a face in its perineum, which almost makes it double-ended.

The left wing of Bosch’s Hermit Saints triptych of around 1500 is a significant departure from its predecessors. The invented creatures are not simple devils tormenting the saint directly, but populate the visionary world. Those creatures and others in his panel are much more originally inventive too: the head with feet attached at the bottom left is like nothing which has preceded it. Bosch makes more specific visual references to details in the Golden Legend, such as being tempted by a naked woman. He also manipulates scale in a highly innovative way.

His probably slightly later triptych of The Temptation of Saint Anthony (Lisbon) develops this even further, with his own pantheon of rearranged humans and composite creatures.

Grünewald’s slightly later diptych provides useful contrast between the conventional Visit of St Anthony to St Paul on the left, and his Temptation of St Anthony (c 1515) on the right. These daemons are quite different from Bosch’s, but are nevertheless highly imaginative in their appearance.

This painting in the Chrysler is one of several now attributed to followers of Bosch. Similar in tone, and using common elements such as the burning buildings, most of its figures, creatures, and inanimate objects are conventional and come from the real world, even though they may here be behaving rather differently from normal.

Another painting now attributed to a follower of Hieronymus Bosch, in the Prado, features weird creatures, some incorporating Bosch’s portmanteau constructions. Saint Anthony also has a pig resting beside him, to help identify him. However, these are small devices inside a much more conventional view, and lack the pervasive otherworldliness of Bosch’s triptych.

The outside of the left panel of Niklaus Manuel’s Antonius altar shows Demons Tormenting St. Anthony (1520). Its daemons, and the wooden clubs with which they attack the saint, are inventive, but still rooted in Stefano di Giovanni’s of a century before.

Jan Wellens de Cock’s painting of about 1520 is fundamentally still based on real figures and objects, including the slightly oddly-proportioned nude women and their jewels. But tucked away in some of its recesses are composites resembling some of those invented by Bosch. A town is also alight up in the top right corner, and in a high fork in the prominent tree, there is an owl. I wonder whether these embellishments were intended at its outset.

Lucas van Leyden’s painting of about 1530 appears to have been directly influenced by Bosch. Leading its small procession of strange creatures is a man with a bird’s head, and a long bill, who wears ice-skates, clearly derived from the creature bearing a note in the foreground of the left wing of Bosch’s triptych. There are several other familiar features in those creatures, but the rest of the painting is far more conventional.

By about 1540, Cornelis Massijs was still content to paint an almost completely realist image, showing Saint Anthony with two naked women, and another who may be their procuress. But once again there are some small decorations – a pot-bellied man, a creature with an inverted funnel on its head, and a little group at the right – which seem to have invaded from the mind of Bosch.

When we reach Pieter Coecke van Aelst in 1543-1550, the emphasis has changed completely. There are still three normal human figures, of the saint, a tempting nude, and her procuress behind, but the rest of the painting is filled with Bosch derivatives, such as the nun with wings biting someone’s leg, in the foreground. The burning town also makes an appearance in the left distance.

Most of those paintings were made in northern Europe. Looking back at the south, in 1552-3 Paolo Veronese had a profoundly different conception. Saint Anthony is not the bearded and bald old man of the north, but almost a parody of the well-muscled, grappling with a pretty young woman whose left breast seems to have become accidentally bared. Clearly Veronese had not encountered the works of Bosch.