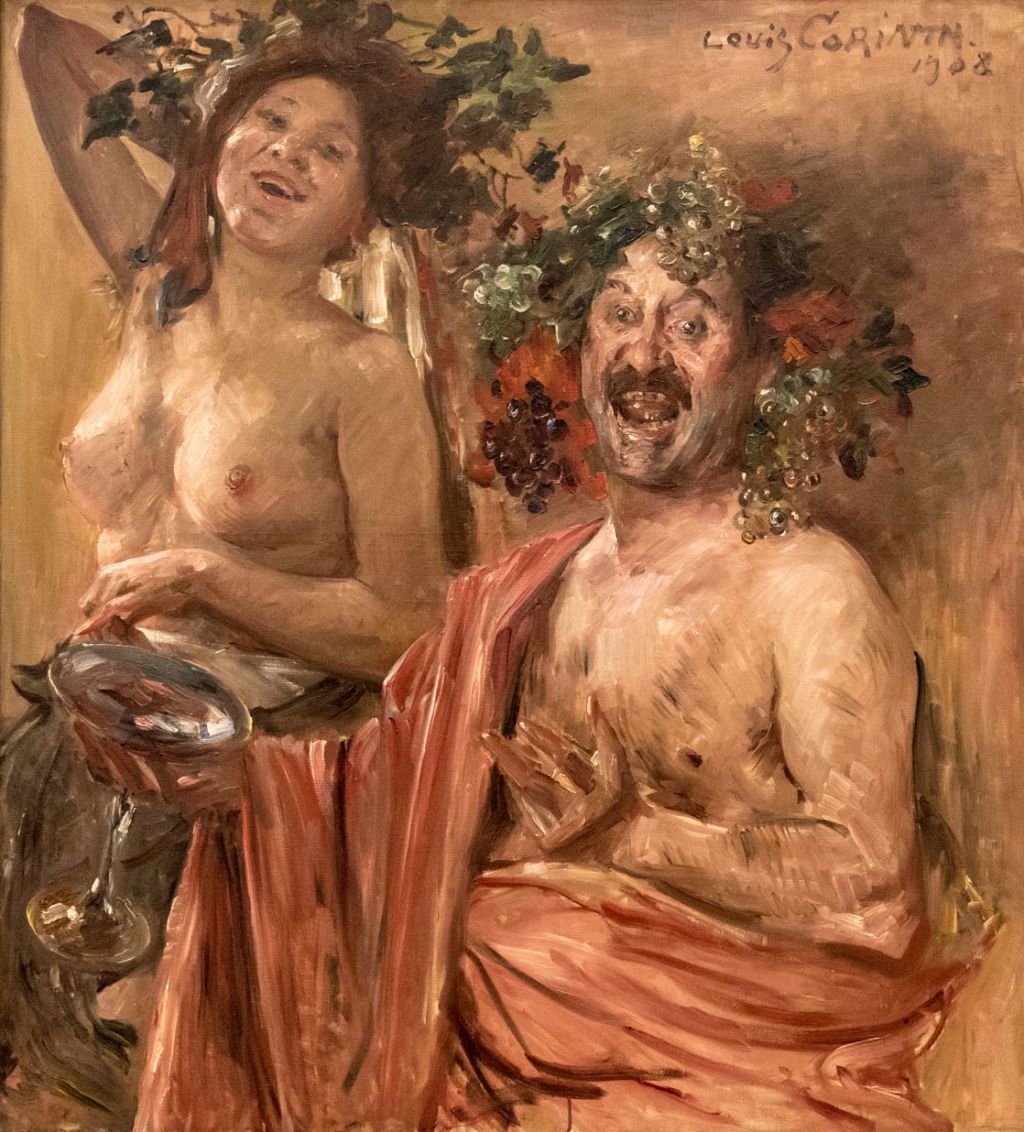 Over the last six weeks or so, I have been looking at the life of Lovis Corinth, together with images of well over a hundred of his paintings. This article and the next draw on those articles to survey his work in three genres: this article looks at his self-portraits and nudes, and the next at his history paintings.

There are two main hypotheses which I want to consider: the first is that his style changed quite dramatically with the times, and the second is that his stroke, at the end of 1911, was no ’cause’ of his change in style – it being commonly held that his work became more painterly, perhaps even more ‘abstract’, as a result of lasting problems in his arm(s) from that stroke.

His earliest self-portrait is typical of his initial detailed realist style, although he did not show the meticulous detail in his hair or beard, for instance, which was more popular earlier in the nineteenth century.

By his later years in Munich, the skin of his face has become more painterly, and non-flesh surfaces such as his shirt and the landscape background, as well as the skull, have obviously visible brushstrokes. A simple self-portrait was also not enough: he posed beside a skeleton, making the comparison between his living, fleshy face, and the fleshless skull next to it.

His move from Munich – where he already had a reputation for drinking and social life – to Berlin brought him love and inspiration from his fiancée then wife Charlotte Berend, but intensified his work, social life, and drinking. His depiction of flesh has a much rougher facture, and most of the passages in this work appear to have been painted very quickly and sketchily.

These changes are even more evident in this wild and ribald double portrait with his wife, posing appropriately as Bacchantes. His chest and left arm now have stark dark brushstrokes which give the flesh a texture rather than form.

Before his stroke, and the outbreak of the First World War, he posed as the standard-bearer to a mediaeval knight, his head held high with pride for Prussia. The flesh of his face appears very rough-hewn now, particularly over surfaces which would normally be shown smooth and blended, such as the forehead. Bright patches on the suit of armour are shown with coarse daubs of white paint.

After his stroke, and just as the First World War was about to start, there has been little roughening in his facture. His face, though, looks more worried, and his previous pride appears to have been quashed.

By the end of the war, when he was 60, he had aged quite markedly, with his receding hair and gaunt cheeks. Although his face and hand are as sketchy as before, his hair and left ear have been rendered more roughly still.

When he was out in the country sun at the family’s chalet by Walchensee, he painted his clothing and the landscape extremely roughly. He looks his years, but if anything appears more healthy and relaxed than when he was confined to Berlin.

His last self-portrait shows age catching up with him, and has an even rougher facture. His forehead is now a field of daubs of different colours, applied coarsely. His hair consists of quite gestural marks seemingly made in haste.

Even in the early years of his career, Corinth painted the flesh of his nudes quite roughly, with an abundace of visible brushstrokes, as if they were still being hewn from the paint on his palette. As with his self-portraits, their faces were more smoothly-worked, but hair was never given the appearance of individual filaments.

By the end of his time in Munich, Corinth showed flesh as if it had been sculpted in brushstrokes, and the bedclothes have been sketched in remarkably loosely.

This more formal group of nudes is generally more ‘finished’, but also has passages which are more painterly – particularly in the more peripheral figures of the clothed man with them, and the woman at the far left.

This was his first substantial nude painted in the studio after his stroke, and a return to one of Corinth’s favourite themes. Its brushmarks are considerably finer than the last two nudes prior to his stroke, but were here painted in tempera rather than oils. This is also a significantly larger canvas than most of his other nudes. This confirms that, when he wanted to at least, he was still able to apply much finer, controlled brushstrokes despite any sequelae from his stroke.

His last nude, painted shortly before his death, shows the roughest facture of all, with flesh that is textured in impasto. If this were to be the result of a physical limitation or problem, then rather than improving during the recovery from his stroke, it has steadily worsened.

The changes which took place over these nearly forty years in Corinth’s application of paint are very great indeed. Where many other painters have become stuck in their mid-career style, leading to their later work looking staid and stale, Corinth’s career shows a relentless progression from detailed realist to loose and gestural expressionist.

His emphasis has steadily transferred from form, to colour and texture. This has ensured that his later works have been every bit as innovative and original as those from earlier in his career.

In the great majority of similar cases of stroke, physical and mental effects are most marked immediately after the event, following which there is a progressive recovery. Corinth’s stroke was severe enough to render him unconscious initially, and to leave him with significantly impaired brain function for several days or more afterwards.

However, initial paralysis in his left arm and leg clearly resolved over the following weeks and months. Far from this being reflected in his paintings between 1912-1925, his facture typically became rougher and more painterly as he grew older. That is the exact opposite of the pattern which would be expected if his painting were significantly impaired as a result of his stroke.