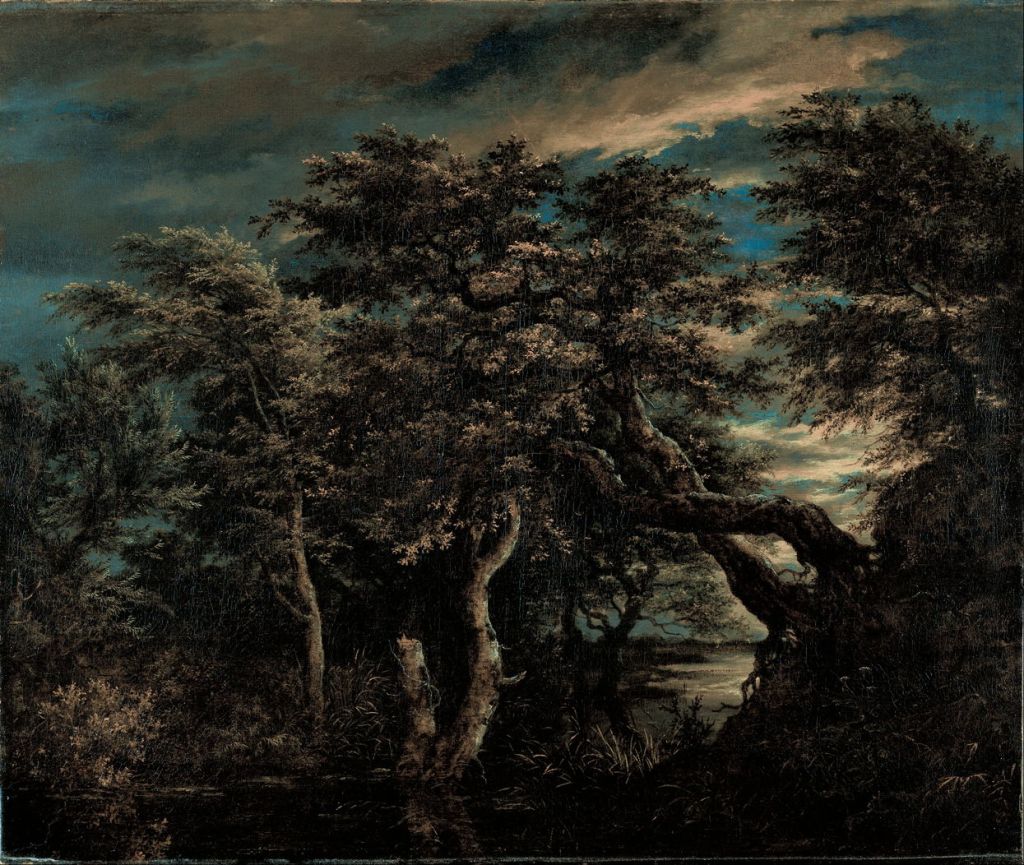 Landscapes painted during the Golden Age of Painting in the Netherlands, for much of the seventeenth century, were an important influence on all subsequent landscape artists, particularly Gainsborough, Constable, and JMW Turner. Of the several hundred artists of that Golden Age who painted landscapes, the best-known and most influential is Jacob van Ruisdael: Vincent van Gogh described his work as “sublime”.

There are other van Ruisdaels or van Ruysdaels – his father Isaack, uncle Salomon, and cousin Jacob, in particular – but when it came to painting trees, this Jacob van Ruisdael was probably the most prolific and important artist between Poussin and Gainsborough.

Jacob Isaackszoon van Ruisdael (1628/9-1682) was born in Haarlem, in the northern Netherlands, into a family of painters. Presumably apprenticed within the family workshop, he was admitted to the local Guild of Saint Luke in 1648, recognition that he was a professional painter in his own right. From the outset, he appears to have specialised in landscape painting.

He moved to Amsterdam in 1657, to take advantage of its growing prosperity. He appears to have travelled little, remaining within the European lowlands and venturing only just over the border into Germany. His only known student was Meindert Hobbema, who became an accomplished landscape painter who also depicted trees as important elements within his works.

When the Dutch economy collapsed in 1672, he appears to have remained relatively prosperous, and continued to work in Amsterdam until his death in 1682.

From the outset, van Ruisdael’s landscapes contained trees, as they would at a time when trees and woods were more extensive in their coverage across the whole of Europe. The view in Landscape with a Church (c 1645) is familiar, as its composition was used by Gainsborough, Constable, and many other later artists. Prominent at the left, and forming repoussoir, is the hulk of an old tree, younger branches sprouting from the remains: a recurrent theme in Gainsborough as well as van Ruisdael. A recession in depth on the right leads to the brighter-lit church in the middle distance.

The trees here are painstakingly constructed from the anatomy of their branches, with leaves painted individually in the foreground, but delicately en masse in the further distance. Bark colour, texture, and rich lichen growth are also shown in detail.

Van Ruisdael soon showed a deep understanding of the many stages in the life and looks of oak trees. In Road through an Oak Forest (c 1646-7) he captures the later life of a stag-headed oak, which long ago lost its crown, on the left, a flush of new growth on a fallen trunk, and another still clinging onto life despite a great split at its base.

Judging from the girth of their trunks, the oak trees shown here are around 400 years old, making it likely that they were saplings in the thirteenth century, possibly even before. They are a remarkable window back in time to the end of the Middle Ages.

Some of van Ruisdael’s sketches and drawings have also survived, among them Landscape with a Stone Bridge (c 1647). This shows his development of foliage from branch structure quite clearly, and the fact that he did not block in that foliage, preferring very gestural squiggles and other marks.

Van Ruisdael was an accurate observer of the different species of tree and their forms, as shown in his timeless A Wooded Landscape with a Pond (c 1648). He has maintained careful, anatomical construction even in the prominent tree at the centre right, in the middle distance, and the canopies appear light and leafy.

Gentle rural decay is shown not only in the ruined buildings in Landscape with a Mill-run and Ruins (c 1653), but also in the stag-head tree in the centre of the painting.

Probably painted soon after he had moved to Amsterdam, The Great Forest (c 1655-60) shows travellers along a track passing at the edge of an ancient woodland, with an assortment of trees in various states of advanced age, including some reduced to being stag-heads.

The upland landscape shown in The Forest Stream (c 1660) was clearly not one that van Ruisdael had ever seen, but must have been composed from studying the paintings of others, and talking to those more widely travelled. His trees remain much as before, with a gnarled and twisted stag-head at the right, and at the left a near-dead trunk which is poised in slow-motion collapse into the stream.

Although most of van Ruisdael’s paintings are in full daylight, as with his contemporaries he also explored more transient light effects, in A Marsh in a Forest at Dusk (c 1660). Now the ancient trees launching themselves out from the bank at the right have engaged with those growing in the marsh. The effect of the late dusk light on their canopies is spectacular, as are the thin banks of cloud above, lit by the setting sun. His careful leaf-by-leaf depiction of canopies of different tree species results in quite distinct textures.

In Landscape with Waterfall (c 1660-70), van Ruisdael revisited the distant church framed by nearer trees theme of Landscape with a Church (c 1645) above. Perhaps this time the church is a little too far away, though still an inspiration to Constable and Gainsborough later. At the right a birch collapses off the edge, and there is a pair of ancient wizened oaks filling the centre.

He continued to develop the theme of old oaks and water in Oaks at a Lake with Water Lilies (c 1665). Again a dying ancient hulk stands like a prow from the bank at the left, and he shows bright flowers on the water-lilies.

As you have seen, many of van Ruisdael’s woods are either unpopulated, or the few people providing staffage are barely visible against their surroundings. A Road through an Oak Wood (date unknown) is different, with a couple of travellers on its road, and woodland activities in the form of clearing and burning at the left.

The Golden Age was primarily based on prosperity from trade, not home production, but increasing demand from the affluent cities led to greater timber production (for ships and buildings, in particular) and for the clearing of woods to augment farmland. In the far distance, a windmill seems a little incongruously placed on a hillside, rather than the more typical Dutch plain.

Despite those innovations, the trees continue to include ancient and massive oaks, with hulks in the left and centre.

Van Ruisdael also painted some distinctly winter scenes, including at least two landscapes featuring trees. Both are now known by the same name, and are believed to be from the same decade. This Winter Landscape (c 1660-70), in the Mauritshuis, picks out frosted leaves in the half-light of dusk or dawn, by a hamlet at the water’s edge. In the far distance, to the left of the buildings, there is a church with a spire.

The other version of Winter Landscape (c 1660-70) is in Birmingham, Alabama. With very similar sky, cloud, lighting, and composition, the water here appears to have frozen over. The frost on the trees is just as delicately handled.

My final selection is perhaps his most detailed essay on the effects of advanced age on trees, Three Great Trees in a Mountainous Landscape with a River (c 1665-70). Although the mountains are borrowed or imaginary, the three trees of the title seem almost impossibly intertwined. The nearest is struggling to survive, some remains of its former glory resting, limbs in the air, at its foot.

Jacob van Ruisdael was a Master landscape painter with a great fondness for trees, particularly ancient oaks which had been battered, twisted, and lost their crowns long ago. In themselves, his paintings of trees are well-perceived and accurate, although they were often put into more fanciful settings. They were a great influence on many artists, including Gainsborough and Constable, making van Ruisdael one of the most important painters of trees.

With his concentration of such old oaks, his paintings also offer us a unique window into the youth of those trees, in the Middle Ages.