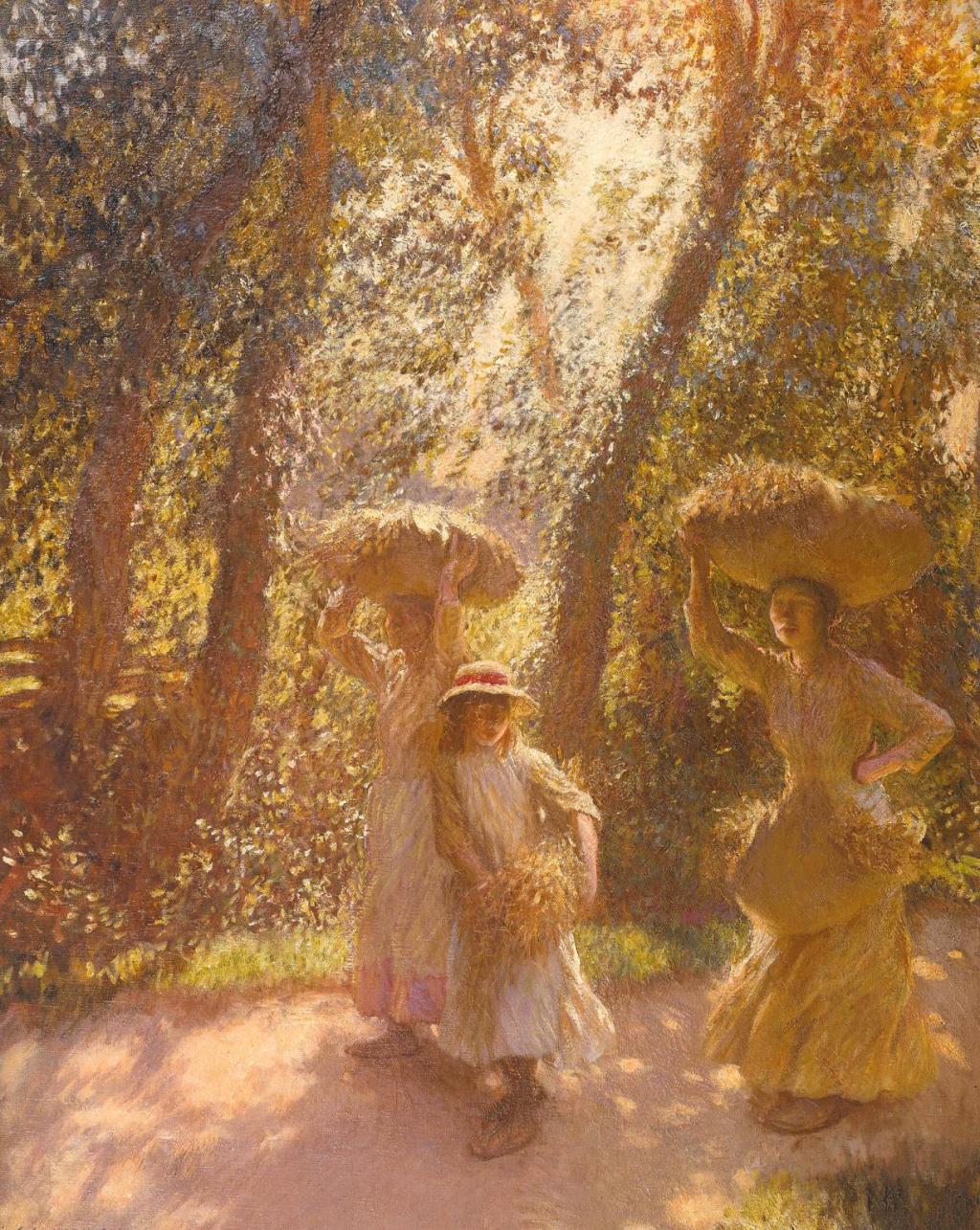 Impressionism as a movement and style of painting embraced the globe, from California to Tokyo, with many foreign artists travelling to study in Paris. In Europe, in particular, national and regional groups flourished, like the Nordic Impressionists in Skagen, Denmark. Although little-known today, there was a dedicated and long-lived Impressionist movement in Britain which was initiated by the American expatriate James Abbott McNeill Whistler (1834-1903) over twenty years from 1860, becoming popular during the 1890s, and lasting until the Second World War. This article is an initial attempt at an outline history.

Although Whistler was an American who worked for some of his career in France and is now best-known for his figurative paintings, from 1858 he lived and painted mainly in London, becoming a prolific landscape painter. He maintained contact with French artists, including Gustave Courbet and Édouard Manet, and returned to see them and paint. It was his landscapes, such as Crepuscule in Opal: Trouville, painted in 1865, that were the first identifiable British Impressionist paintings.

While this and his other works might appear to have been painted en plein air, Whistler was a devotee of the then-popular technique of painting from memory, and most were probably painted in his studio.

During the winter of 1872, Whistler was on the long broad estuary connecting the port of Southampton to the Solent, where he painted this Nocturne: Blue and Gold — Southampton Water (1872). That was the same year that Claude Monet painted his famous view of dawn in the French port of Dieppe, which later gave the Impressionists their name, Impression, Sunrise (below). Although Whistler is more constrained in his use of colour, a characteristic of many of the British Impressionists, there’s a great deal of common ground in these two paintings.

That was an important year for Whistler, as it was when he first read Hermann von Helmholtz’s writings on the physiology of vision. Von Helmholtz was read avidly by the French Impressionists too, and formed the basis for Divisionism and colour theory later in the century.

It wasn’t until the mid-1880s that Whistler’s style started spreading to other painters in Britain. Among the first was an assistant and pupil of his, Walter Sickert (1860–1942), who briefly studied at the Slade School of Art in London in 1881 before he went to work with Whistler. Another American artist who joined Whistler’s circle was the expatriate John Singer Sargent (1856–1925), who fled his successful portraiture business in Paris after a scandal erupted in 1884.

Sargent had first met Claude Monet in 1876, and it’s thought that his painting of Claude Monet Painting by the Edge of a Wood was made in 1885, when they were painting together at Monet’s house in Giverny. By 1886, Sargent had settled into his London studio, and was the leading portrait painter in London from then until 1907, when he closed that studio.

Sargent’s virtuoso Gust of Wind from about 1886-7 compares with Claude Monet’s La Promenade, which had been painted in 1875.

Sickert’s landscapes such as Mont de Neuville, Dieppe – Blue Sky, from 1887, are mostly small and sketchy, although like Whistler his earth colours weren’t typical of French Impressionism.

In the mid-1880s, Whistler, Sargent and others had grown unhappy with attempts to reform the Royal Academy, and formed the New English Art Club in 1886. This became the crucible of British Impressionism, and its exhibitions included many of its finest examples.

During the 1880s, young British artists returned from training in Paris to swell the ranks of the movement in Britain. Some retained Naturalist style, following that of Jules Bastien-Lepage who died suddenly in late 1884. Friction grew between the Impressionists and Naturalists in the New English Art Club.

The Impressionists broke away and formed the London Impressionists in 1889, who exhibited at the Goupil Gallery in the city, although that proved short-lived. Among them was Philip Wilson Steer (1860–1942), who had been one of the founding members of the New English Art Club, and in the late 1880s painted many Impressionist views of the Suffolk coast, including this of Southwold (c 1889).

There were two influential teachers who allied with Impressionism: Henry Tonks and Sir George Clausen, at the Slade School of Art and the Royal Academy Schools respectively.

Henry Tonks (1862-1937) was uniquely a fully-qualified surgeon when he became a full-time artist and teacher, at about the time that he painted A Girl with a Parrot (c 1893).

In the last few years of the nineteenth century, British Impressionists were recognised internationally. Edward Stott’s The Old Gate (1896) was highly successful when it was exhibited in Munich, for example.

Although little trace of their work remains today, among the British Impressionists were several successful women artists, including Alice Maud Fanner (1866-1930), who painted this view of Hyde Park, London, in about 1900. Their art suffered the double blow of rejection by Modernist critics like Roger Fry in the early twentieth century, and the long-established tendency to forget women artists.

Sir George Clausen (1852–1944) came to Impressionism late, after many successful years of Naturalist painting. A Frosty March Morning (1904) shows influence from Pissarro’s views of early winter morning frost and mist. He was another founding member of the New English Art Club, who became Professor of Painting at the Royal Academy Schools in London.

As Clausen led the British Impressionist movement in 1904, Wynford Dewhurst (1864-1941), whose mentor was Claude Monet, published his influential book on the development of Impressionist painting, in which he controversially proposed that its antecedents had been the paintings of John Constable and JMW Turner.

As in other countries outside France, British Impressionism declined slowly, lingering on gloriously on the canvases of artists like Sir William Nicholson (1872–1949) as late as the Second World War. His view of Harbour in Snow, La Rochelle was painted quickly in his room on the first floor using both brush and knife in 1938.

Next week I’ll present a catalogue of the artists this series has covered, together with a table of contents.