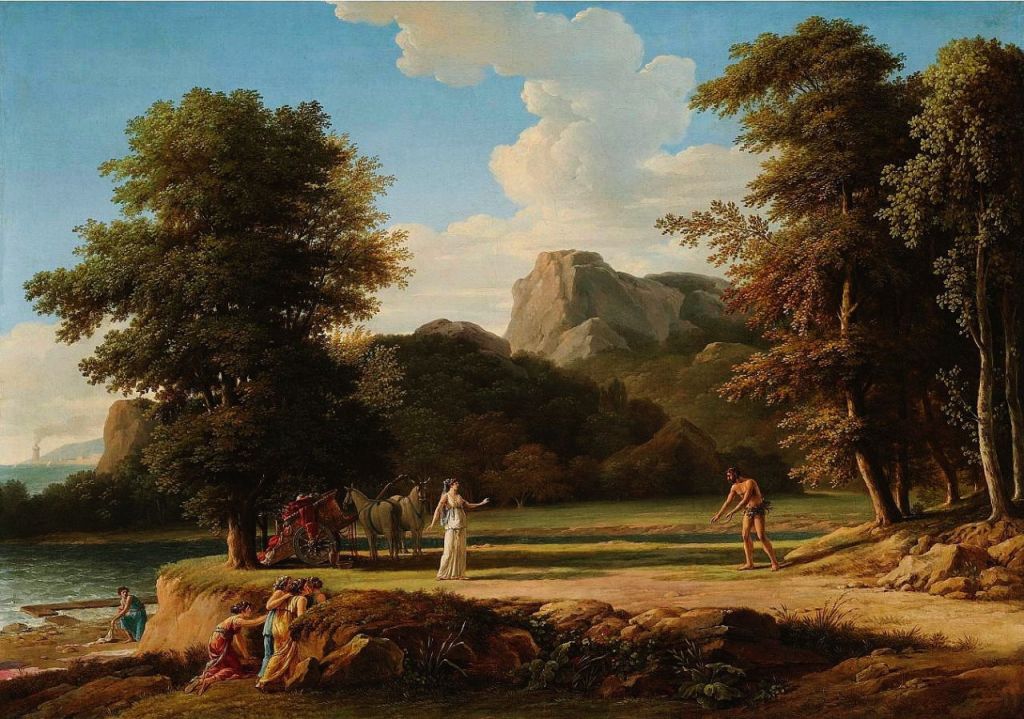 At the end of the previous article in this series, Circe had helpfully advised Odysseus that he would have to sail past the Sirens, two to five creatures who lured men to their death with their singing. In preparation, Odysseus got his sailors to plug their ears with beeswax before they reached the Sirens, so that they couldn’t hear their song, and to bind him to the mast. He gave them strict instructions that under no circumstances, no matter what he said at the time, were they to loosen his bonds, as he would be listening to the Sirens’ song.

As the group reached the Sirens, Odysseus instructed his men to release him, but instead they bound him even more closely to the mast. Once they had passed safely from earshot of the Sirens, Odysseus used his facial expression to inform his men, who then released him, and they sailed on.

William Etty’s The Sirens and Ulysses from about 1837 is one the pioneering accounts in paint of this story. His three naked sirens are all woman, one playing a lyre, and doing their best to draw the sailors from Odysseus’ ship to a shore on which lie the remains of earlier victims.

John William Waterhouse’s Ulysses and the Sirens (1891) is close to the Homeric account, although he provides a total of seven Sirens, appropriately shown as a large eagle-like bird of prey with the head and neck of a beautiful young woman. He has added bandage wrappings around the head of each sailor to make it clear that their ears are stopped from hearing sound, a visual device which links neatly with the text.

His Sirens are clearly singing, particularly the one closest to the viewer, who is challenging the hearing protection of one of the sailors. Another sailor, at the stern of the ship (left of the painting), is seen clutching his ears.

The Sirens (1903) marked Henrietta Rae’s return to narrative works featuring classical nudes. Odysseus’ ship is in the distance, as the three beautiful sirens use their pipes and lyre to lure the occupants to their deaths.

The next challenge to Odysseus and his crew was the combined perils of the monster Scylla and the whirlpool Charybdis, which claimed six men. The remaining crew overrode Odysseus and landed on Thrinacia, where they ignored the warnings given by Tiresias and Circe, and hunted the sacred cattle of Helios. That brought disaster for them in shipwreck, drowning all except Odysseus, who clung on to a fig tree, and was washed up on the island of Ogygia, where he was held captive by Calypso.

In Greek mythology, Calypso was a nymph, daughter of Atlas the Titan, who lived on the island of Ogygia. She detained Odysseus for seven years as her ‘immortal husband’, enchanting him with her singing as she weaved with a golden shuttle on her loom. However, Odysseus realised that he wanted to be re-united with his wife Penelope, and the gods finally released him.

In Arnold Böcklin’s Odysseus and Calypso (1883), she’s shown in front of a cave on the beach, holding her lyre rather than weaving. Odysseus is at the far left, staring into the distance, although he faces away, so the actual direction of his gaze isn’t seen. He would appear to be homesick for Penelope, wishing that he was released from Calypso’s control. This is a stark image of a barren landscape and empty relationship.

Odysseus escaped from the island of Ogygia on a raft. This was wrecked in a storm inflicted by Poseidon, and he swam ashore on the island of the Phaeacians, variously named Scheria or Phaeacia. There he hauled himself out of a river estuary, exhausted and naked, then made his way into a wood, where he fell asleep in heaped leaves.

The following morning Nausicaä “of the beautiful robes”, daughter of Alcinous the King of the Phaeacians and his queen Arete, travelled in a mule wagon with her handmaids to wash those robes in a river. Her mother gave her a chest of food, wine in a goat-skin flask, and soft olive oil in a flask of gold for Nausicaä and her handmaids to use after bathing themselves.

When they arrived at the washing place on the river, they unhitched the mules and let them graze, then washed the garments in the river, spreading them out on the seashore to dry. They next bathed themselves, anointed themselves with oil, and had lunch. Afterwards they played ball with one another. When they were about to harness the mules back up to the wagon, Nausicaä threw the ball at one of her handmaids, who didn’t catch it, and it fell into deep water.

At that point Odysseus woke up, heard the sound of the women’s voices, covered himself with a leafy branch, and emerged from the wood. The handmaids scattered, but Nausicaä stayed where she was. Odysseus, still salt-crusted from his shipwreck, begged for Nausicaä’s help. She agreed to take him back with her to the palace, and told her handmaids to return and assist him. Odysseus went and washed the salt off his body, then anointed himself with oil, and dressed in clothes which Nausicaä had provided. They gave him food and drink, which he consumed ravenously.

Once he had eaten his fill, the party took the mule wagon back to the city, where King Alcinous and the Phaeacians agreed to help Odysseus return home, and to deliver him to a hidden harbour on Ithaca.

Jean Veber’s Ulysses and Nausicaä (1888) may appear a simple painting, but it has great narrative content. It follows Homer’s text faithfully, in showing the initial moment of contact between Odysseus and Nausicaä (at the right), with her handmaids scurrying off in shock. Veber also places a ball between the pair, as a further cue to the text.

Salvator Rosa’s Odysseus and Nausicaä (1663-4) shows a moment slightly further on in the story, where Odysseus is being given garments to cover his nakedness, although one of the handmaids still seems sufficiently shocked at his appearance that she needs to be comforted by another.

William McGregor Paxton’s Nausicaä (before 1937) picks the moment of Odysseus’ first appearance, just before the handmaids scattered in fright. Although the text doesn’t state that they were nude at this stage, when playing ball after lunch, Paxton startles us with eight females and one male nude packed into a single canvas, a feat of which even William Etty might have been proud.

Michele Desubleo’s Odysseus and Nausicaä (c 1654) gives an even fuller account of the text. Odysseus is shown naked, clutching the leafy branch strategically to his crotch with his left hand. His right arm is held out, apparently pleading his case to the regal princess, sat in her beautiful robes, and in the process of handing him an item of clothing.

Nausicaä holds in her left hand a wooden bat, following the apocryphal story that the ball game which they were playing was an early form of real tennis, for which the ball is towards the lower edge of the painting. Behind her is the canopy of the wagon, and there is washing drying towards the top of the canvas, and in the middle distance. There is also a pile of neatly folded washing at Nausicaä’s feet. The far distance shows a gentle Mediterranean coastline.

Joachim von Sandrart’s Odysseus and Nausicaä (c 1630-88) elaborates the scene of Odysseus pleading with Nausicaä. He’s naked apart from the leafy branch, on bended knee, while she is reaching for some clothes to hand to him. One of her handmaids is just about to pass him a large bowl of fruit. There are also some ornaments and puzzles, of which the most prominent is a small dog by Nausicaä’s right foot. But behind Odysseus, lurking in the shade, is another naked male wearing a garland of flowers on his head; he doesn’t appear to match any character from the text narrative.

In the background is a building which may be a temple of Poseidon, which is the first place in the city that Odysseus visits, in order to make peace with the god for his future sea travel. And watching from the heavens is Athena, who has been intervening to try to help Odysseus.

Jacob Jordaens’ The Meeting of Odysseus and Nausicaä (c 1630-40) apparently connects with a tapestry cycle showing the life of Odysseus which was designed by Jordaens at that time. It’s a sophisticated re-casting of the original story in contemporary times, and repays careful study.

Odysseus has just emerged from the wood at the right, is naked, and crouches, his hands held together whilst he pleads his case with Nausicaä. Her party is substantial, with an ornate carriage of state drawn by a pair of fine horses, and what appears to be a second carriage with handmaids, behind the figure of Nausicaä complete with her beautiful robes. A total of thirteen handmaids are shown.

Pieter Lastman’s Odysseus and Nausicaä (1619) is a slightly earlier painting which may have influenced Jordaens. It too re-casts the story into more contemporary times, but preserves more references to the original text. Odysseus is naked, save for his self-adhesive leafy branch, and is clearly pleading his case with Nausicaä. She stands alone, magisterial and rather more matronly than others have envisaged.

In front of Odysseus is a spread fit for a princess plus, complete with an ornate chest. Although the wagon is more rustic in construction, it’s drawn by a white horse. The handmaids on the wagon, who are loading baskets of washing onto it, have facial expressions and body language which show fright if not panic and terror. In the distance another two handmaids are seen carrying another basket of washing to the wagon.

Friedrich Preller the Elder’s Odysseus and Nausicaä (c 1864) is an expansive landscape which is unfortunately not available at higher resolution. The naked Odysseus is just in the process of coming out from behind a bush, towards the right. Nausicaä stands as if in a spotlight in the centre of the canvas. Her handmaids are seen still dealing with the washing (left), in alarm (behind her), or preparing the mule wagon (background). I think that I can also see a coastal city in the far background.

Pierre-Henri de Valenciennes’ Classical Landscape – Ulysses Imploring the Assistance of Nausicaä (1790) is not only a glorious imagined landscape, but also comes very close to being a complete account of the story.

Odysseus, wearing only a nappy/diaper of leafy branches, has just stepped out from the trees at the right, and is pleading his case with Nausicaä, who stands in sunlight slightly to the left of centre. Behind her are two mules by a chariot-like carriage. One handmaid is still down by the estuary washing clothes, but the others are huddled in hiding below a small cliff above the beach. Further along the coast, shown at the left edge of the canvas, is a city which has a prominent pharos-like tower, a reference to the Phaeacians’ sea-going skills and Odysseus’ future travels. And that’s where the third and final article in this series starts.