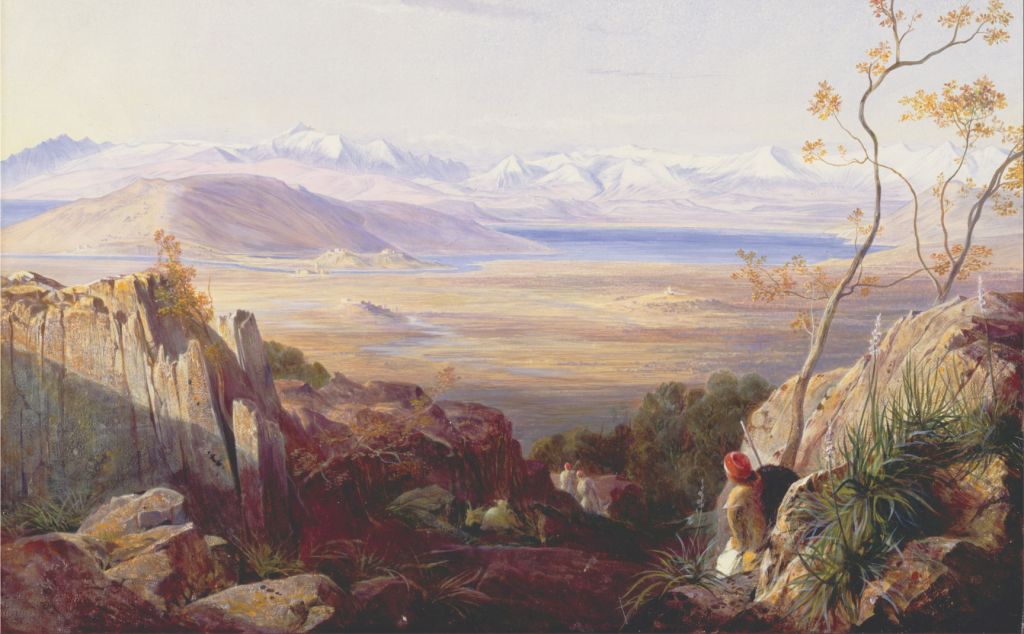 Up in the mountains, one of the first signs of the arrival of autumn/fall, and the imminence of winter, is the appearance of snow on the slopes. In some places like Scotland, where mountains are relatively low, the first brush with the new season occurs when their tops change from brown-grey to white, as if dusted by icing sugar. For children, skiers and winter mountaineers, this brings the first thrill of the season to come; for those who drive snowploughs or farm in the uplands, it’s the first warning of the work to come.

For most painters, the appearance of a snowline on what had been bare rock is an instruction to return in haste to warmer climes, so relatively few landscape artists seem to have stayed around in the mountains long enough to paint those snowlines. This weekend, in two articles, I show some examples of this dramatic reminder of the coming of winter, which has already this year appeared in the Scottish Highlands.

In Caspar David Friedrich’s painting of The Watzmann (1824-5) the snowline enhances aerial perspective. In the foreground are rock runs and barren land, with patchy low grass, behind which are tottering rock pinnacles bearing a few trees. The middle distance contains rolling forest, behind which the land rises abruptly in a rock cliff, and a rock hill showing intensely folded strata. In the far distance are a pair of sharp peaks, snow burying their crevices and chimneys, and covering the tops.

The Watzmann is the third highest peak in Germany, and is south of the village of Berchtesgaden, in the Bavarian Alps. Friedrich’s painting appears to show the mountain and its environs quite faithfully, although all signs of human habitation (including perhaps the village itself) have been replaced by rocky and barren land.

Although the subject of Frederic Edwin Church’s Cotopaxi (1855) is too near the equator to show any seasonal change, from his vantage point its snowline produces a false horizon, above which the white cone contrasts with blue sky.

Four years later, in Church’s vast Heart of the Andes (1859), distant snowclad mountains enhanced the awe to draw a total of more than twelve thousand people to view it in New York City alone.

Clarkson Stanfield’s marine paintings may have become rather fornulaic, but his view of Ischia and the Castello d’Ischia, near Naples, from 1857, shows how subtle he could be when depicting the distant snow-capped mountains of Ischia. Here the peak appears to echo the castle, with the addition of snow and ice.

Some of the finest snowlines were painted by the British nonsense poet and watercolourist Edward Lear. He settled in Corfu for three years from 1861. During that stay I suspect that he painted this view of Corfu from Ascension (c 1860), with his signature snow-capped peaks in the far distance, here of the Albanian mountains.

Corfu was an ideal launchpad for Lear’s explorations of Albania, where he painted this view of Butrinto, Albania (1861). Also known by its Roman name of Buthrotum, this has remains of ancient Greek and Roman cities, and is on the coast near the border with Greece, where the island of Corfu reaches closest to the mainland. Again its snowline makes its distant mountains seem even further away.

In 1867, Franz von Lenbach and a student of his travelled to Madrid to copy the Masters in the Prado there for his patron Baron Adolf von Schack. The following year, von Lenbach painted two works in Granada: The Alhambra in Granada (1868) is a magnificent sketch including the backdrop of the distant mountains, and appears to have been painted in front of the motif. It was perhaps this painting which established this motif as an almost unique combination of foreground heat and the contradictory background snowline.

Ferdinand Hodler’s early paintings were landscapes after the strict realist style of Alexandre Calame, which he sold to tourists. They show his technical skills – here at the age of only 18, before he had received much formal tuition, with a snowline and glowing white massif above.

Among Edward Lear’s most spectacular views is Kangchenjunga from Darjeeling, which he painted in 1879. Darjeeling is high in the Lesser Himalaya, at an elevation of just over two thousand metres (over 6,500 feet), in the far north of West Bengal, India. Famed for its tea plantations, it became a ‘hill station’ for British residents of India in the early nineteenth century, and just a couple of years after Lear painted this view, it was connected by the Darjeeling Himalayan Railway to New Jalpaiguri.

Kangchenjunga is a sacred mountain; even today, teams who attain its summit stop short to avoid its violation. The Kangchenjunga massif is best viewed from Darjeeling, which is about eighty miles away.