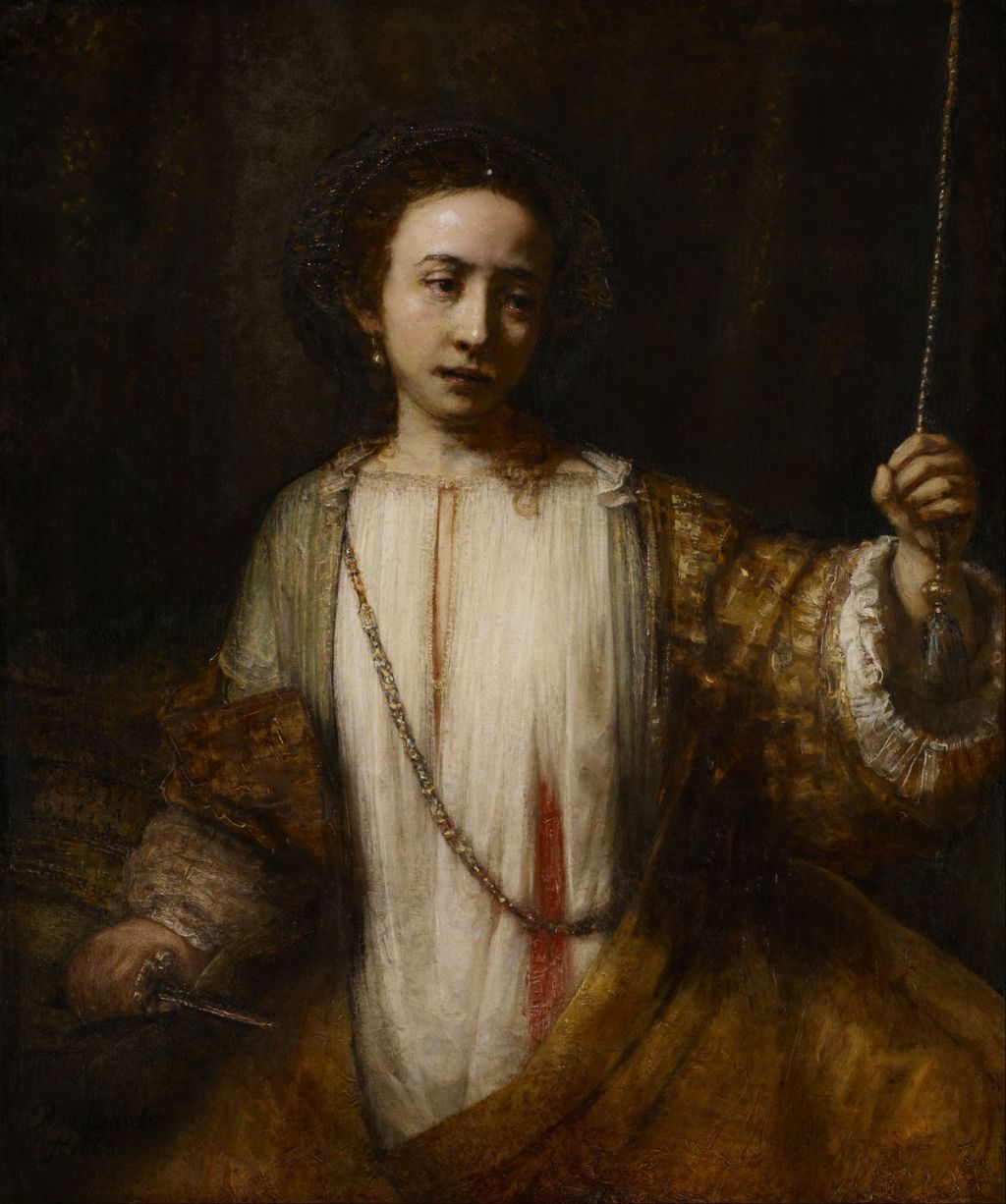 The city of Rome has a turbulent history, which was perhaps bloodiest during the reigns of its seven kings, before it became a republic. Its seventh and last king, Tarquinius Superbus, was self-made, literally taking over the throne in around 534 BCE and having his predecessor assassinated shortly afterwards. After that, his conduct remained as oppressive and autocratic until it reached a crisis in about 510 to 507 BCE, when a rape and suicide led to his downfall and the establishment of the Republic of Rome.

The story of Lucretia, who died by her own hand, is well known. Various versions, all of which date from about 500 years later, contain slightly different details, so I’ll here try to offer as much of a consensus as I can.

Lucretia, the daughter of Spurius Lucretius, the prefect of Rome and a “man of distinction”, was married to one of its consuls, Lucius Tarquinius Collatinus, who was the son of the king’s nephew. For whatever reason, Sextus Tarquinius, the son of King Lucius Tarquinius Superbus, was being entertained by Lucretia and her household, her husband being away at the siege of Ardea.

At night, Sextus entered Lucretia’s bedroom, and offered her the choice of submitting to his sexual advances and becoming his wife, or he would kill her and one of her slaves, and claim that he had caught them engaged in adulterous sex. He then raped her, and left.

The following morning she dressed in black and met with her father and witnesses, in front of whom she gave account of what had happened, and called for vengeance. While her father and the witnesses were discussing the matter, she drew a dagger and stabbed herself in the chest, dying in front of them.

Her husband returned, was distraught, and swore an oath on the dagger that he would overthrow the current king’s dynasty and end its tyranny. Those mourning Lucretia’s death swore the same oath on it, and the blood of Lucretia. Her body was then paraded in the Roman Forum, and fuelled the overthrow of the king and Rome’s early monarchy.

A story of passion, strong emotion, and gravity, this has been depicted in many paintings, with written accounts by Chaucer, Shakespeare, and many others. Benjamin Britten also wrote an opera The Rape of Lucretia, first performed in 1946.

Sandro Botticelli’s comprehensive account of The Story of Lucretia, painted in 1500-01, is not one of his well-known works, but tells the story effectively using multiplex narrative. At the left, Lucretia is raped at knifepoint by Sextus Tarquinius. She then commits suicide in shame, and anger erupts through Rome. Her body is carried from her house (right) and placed in the Forum. There, her husband and his friends swear to overthrow the king (centre), and this brings about the new constitution.

As he grew older, Veronese attained a maturity which enabled him to tackle highly emotive subjects, such as Lucretia, one of his most moving paintings.

Veronese shows Lucretia in her funereal black robes, clearly in opulent surroundings judging by the rich but sombre drapes, with the dagger held at her breast. She wears fine jewellery, as would be appropriate for a woman of her status, and her hair is elaborately decorated with pearls and stones.

Her face is cast down, as if starting the collapse after she had thrust her dagger into her chest, its expression masklike, as death starts to overwhelm her. Her left hand holds her robes up above the dagger, which is grasped in her right hand. The viscid, dark blood covering the end reveals that it has already been thrust in, and has just been withdrawn. As she now crosses the threshold of death, she will fade back into the blackness of her robes, and the oblivion beyond.

The daughter of a painter who became probably the finest of the successors to Caravaggio, Artemisia Gentileschi was herself raped by Tassi when a pupil of his. She then had to undergo the ordeal of his trial. Never afraid to tackle such challenging and emotive subjects, she is believed to have painted several versions of Lucretia. A later painting (from c 1630-5) may have been made by her, or Massimo Stanzione, but this version is distinctively hers.

She shows Lucretia with her robes in disarray, seated, and looking up. Her face is contorted, her brow knotted, and her lips pursed. She has none of the fine jewellery which might be expected, and her black garb is replaced by fabric the same dark red as congealing blood. She brandishes the dagger in her left hand, its blade pointing up into the air, but almost concealed in the surrounding black gloom. Her right hand grasps her left breast from underneath, pushing it upwards as if to clear the way for the thrust of the blade.

It is not immediately clear whether she has already driven the dagger into her chest: I suspect not, and that she is just about to make that final voluntary effort, in a swift arc with her left hand.

Having been fortunate enough to see both the next paintings together, in the 2014 Late Rembrandt exhibition, I can guarantee that making the effort to see them both is worthwhile. They are among the most moving of Rembrandt’s works, and I think two of the most emotive paintings ever created. Although painted just two years apart, in 1664 and 1666, and apparently using the same model, they are quite different in mood and narrative content.

In the earlier painting, Lucretia is seen just about to run the dagger home into her chest. Rembrandt dresses her in fine contemporary clothes, rather than the black robes of the story, and she is richly decorated with jewellery. She is seen facing the viewer, but her head is slightly inclined to the right, and she stares emptily at her right hand. Her face shows calm resignation to her fate, with a tinge of wistful sadness.

Her arms are outstretched, to the edges of the canvas. The left hand is grubby and held open, palm towards the viewer, perhaps protesting her virtue. The right grasps the handle of a dagger, which is just being brought around in an arc to impale her chest and bring her end.

The later painting is more remarkable still: Lucretia has already pierced her chest with the blade. Her fine clothing has been pulled back to reveal her simple white shift, which has a broad streak of fresh, bright red blood running down from the point at which the dagger was inserted.

Her arms are outstretched here too, but for very different purposes. The right hand still clutches the dagger, which has dropped to waist level already. Her left hand is dragging a beaded bell-pull, presumably to summon her family to witness her final moments on earth.

It is her face, though, which makes this painting. Her eyes, moistened by welling tears, are looking away to the right of the painting, in an absent-minded stare. Her brow is tensed with subtle anxiety. She knows that she is about to die, and is preparing herself for that moment.

The next painting was a surprise discovery to me. One of the few narrative works painted by the most prominent and successful British portraitist of the late 1600s and early 1700s, it’s a far cry from his many depictions of the great and the good of the day. Painted in 1672-5, it follows from the paintings above.

Lucretia is here caught at the moment that the dagger is piercing her chest. She is not wearing the standard black robes of the story, but a plain dress which has been thrown open to bare her chest and right breast. Her head and eyes are cast up (in a posture similar to that shown by Artemisia Gentileschi), as if looking towards her destination in heaven. She appears tensed and anxious, and her mouth is part open as if she is gasping as the metal passes through the wall of her chest.

The dagger is gripped in her right hand, which is driving it into her body. Her left arm hangs by her side, inactive, and behind her is a deep red drape, reminding us of the blood which will soon run from her wound.

Among the leaders who drove out and overthrew the king were Brutus and Publicola, who with popular support instituted a republic under two consuls. However, Publicola’s hopes of being elected to the office were dashed when Lucretia’s husband, Tarquinius Collatinus, was chosen instead.

Publicola then briefly withdrew from public life, while remaining loyal to the new republic. Tarquinius Superbus sent envoys to announce his abdication from the throne, but demanding return of his riches, and to be allowed to live in exile. This sowed dissension between the consuls and among the senators, and some, the Vitelli and Aquilli families who were relatives of the consuls, conspired to kill the consuls and support the monarchy – the Tarquinian Conspiracy. Among the conspirators were two brothers of Brutus’ wife, and his two sons.

The plot was discovered, Brutus and the other consul had the conspirators executed in front of them, although Brutus is reported to have shown understandable emotion when they were killed. Once they had been executed, the headless corpses were returned to their families, which brings me to the last painting for today, Jacques-Louis David’s The Lictors Bring to Brutus the Bodies of His Sons from 1789.

David was completing this painting at the start of the French Revolution, which turned out to be an appropriate moment for its story. In the background at the left, the lictors (bearers) are bringing the two bodies in, Brutus sat in front, turned away and looking towards the viewer. To the right of centre, his wife – who has lost both her sons and two brothers – is very anxious and disturbed, holding her right hand out in a welcoming gesture, and embracing her two young daughters to her bosom. On a table covered with a blood-red cloth by her is a set of Roman scissors, as a symbol of the execution.

With little facial expression (from only Brutus’ wife and one daughter), David uses body language and composition to great effect, and is careful to hint at the corpses with subtlety rather than show then in full gore.

When it was rumoured in the press that the monarchy intended to prevent this painting from being shown in the 1789 Salon, there was uproar, and it was permitted. It was quickly seen as showing the values required of the French people in supporting the revolution, even if they had to see members of their own family die in the process.

Tarquinius Superbus hadn’t given up hope of being the king of Rome again. In the next article in this series, I’ll look at paintings of Rome at war with the Etruscan Lars Porsena, and one of its most famous legends of valour.