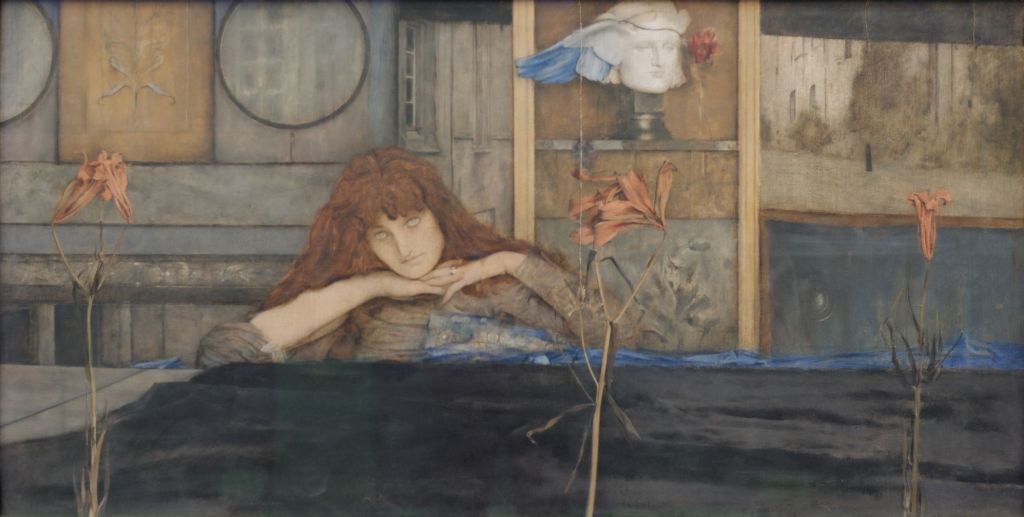 The Salon de la Rose + Croix is often considered to be the apogee of the Symbolist Movement in France. A series of six exhibitions of paintings and sculptures, accompanied by music by Erik Satie, they revolved around one man, Joséphin Péladan, who had appointed himself Sâr, their cultic leader. For various reasons which I will go into later the Salons didn’t gain all the support for which Péladan had hoped, so in this and tomorrow’s articles I’m going to show a broader range of paintings, including some by artists who declined Péladan’s overtures to exhibit in his Salons.

Péladan revived the long-dead religious cult of Rosicrucianism, the order of the ‘rosy cross’, which had arisen as a secret society and died quietly in the seventeenth century. As the literary and artistic circles of Paris steadily slid towards the end of the nineteenth century, it was something new and exciting. Péladan himself wasn’t a visual artist or composer at all, but a writer and critic who clearly enjoyed influence as the High Priest of his new occult movement.

His mission in art was to overcome what he saw as the ‘materialism’ of the day, by encouraging depictions of the unreal, dreams, and the spiritual.

The first Salon was held in Paris in 1892, following which there were five further Salons, the last held in 1897, each hosted by the prestigious Durand-Ruel Gallery. Carlos Schwabe designed this famous poster for the first of the series. He had probably been introduced to Péladan’s new cult as a result of his friendship with other members of the movement, including the composer Vincent d’Indy.

Péladan liked Arnold Böcklin’s ‘Gothic fantasies’, which must have included his famous Island of the Dead. This is the fifth version, commissioned by the Museum of Fine Arts in Leipzig, which he painted in 1886, and was the last which he completed during his lifetime.

A great deal has been written and speculated about this remarkable series of paintings. Böcklin evokes mood, of a poignant calm, of death and loss. During the 1880s, its reputation had grown. It was reproduced as a print by Max Klinger which sold strongly. Reproductions were bought by the Swedish artist Prince Eugen, and Georges Clemenceau, Prime Minister of France. By the early twentieth century, several artists had painted their own interpretations of the image. It has influenced countless painters, poets, writers, and other artists since.

Another of Böcklin’s painting which should have been well-received is his Attack by Pirates (1886), a more direct ‘Gothic’ Romantic work showing a group of pirates attacking some Italianate buildings atop the sheer cliffs of a tiny island. The attackers have already set light to the buildings, which casts an eerie red light against the black clouds.

Among the younger generation who exhibited was Alphonse Osbert, who had come under the influence of Puvis de Chavannes before developing this distinctive style. This unusual portrait of the ancient Greek poet Sappho was painted in 1888, and demonstrates well his very constrained palette, simplified earth forms, and a rising or setting sun or moon.

Without knowing who the figure is, you might mistake this for a painting of Joan of Arc, but it’s Osbert’s 1892 Vision of Saint Genevieve. The patron saint of the city of Paris, Genevieve had similarly humble origins as a peasant girl in Nanterre who experienced frequent visions, leading her to save the city from Attila’s attack in 451. Here Osbert limits his colours to blue and green, which have symbolic associations with melancholy and hope respectively. This is probably Osbert’s best-known work, and was exhibited at the second Salon de la Rose + Croix in 1893.

The Swiss artist Ferdinand Hodler had recently turned towards Symbolist motifs, most notably in his famous painting of Night from 1889-90. Four young men and three young women are sleeping outdoors, under black blankets. In the middle of the group, a black-cloaked figure is crouching between the legs of one of the men, who is alarmed; the figure represents death. This painting can therefore be read as telling the all too common story of early death among adults at the time, notably from tuberculosis and other infectious diseases, something that Hodler knew well.

This painting was first submitted for exhibition in Geneva in 1891, but was rejected as being obscene, so Hodler exhibited it in a separate building nearby, causing quite a scandal. When shown in Paris it received praise from Pierre Puvis de Chavannes and the sculptor Auguste Rodin. It was exhibited to further acclaim at the Exposition Universelle in Paris in 1900.

Hodler’s Disappointed Souls (1892) shows five older men dressed in black robes and sat on a bench in barren fields similar to those of Night. He was successful in getting this exhibited in Geneva in 1892.

Fernand Khnopff had only recently painted one of his most enigmatic works, I Lock my Door upon Myself (1891), which was inspired by, and quoted from, a poem by his friend Dante Gabriel Rossetti’s sister, Christina Rossetti (1830-94), Who Shall Deliver Me? considering God’s role in resolving inner turmoil:
God strengthen me to bear myself;
That heaviest weight of all to bear,
Inalienable weight of care.
All others are outside myself;
I lock my door and bar them out
The turmoil, tedium, gad-about.
I lock my door upon myself,
And bar them out; but who shall wall
Self from myself, most loathed of all?
If I could once lay down myself,
And start self-purged upon the race
That all must run! Death runs apace.
If I could set aside myself,
And start with lightened heart upon
The road by all men overgone!
God harden me against myself,
This coward with pathetic voice
Who craves for ease and rest and joys
Myself, arch-traitor to myself;
My hollowest friend, my deadliest foe,
My clog whatever road I go.
Yet One there is can curb myself,
Can roll the strangling load from me
Break off the yoke and set me free.

The sculpted head in the background is of Hypnos, god of sleep, who lived in the underworld with his twin brother Thanatos, god of death. To the right of that head is a view of a mediaeval town, with a single dark figure. Three rare orange lily flowers are shown in the foreground, and the blue eyes of the woman pierce through the viewer.

Edmond Aman-Jean’s famous portrait of Paul Verlaine (1892) was painted while the poet was convalescing with syphilis in Paris, at a time when he was slowly succumbing to its consequences, and his addiction to absinthe. Verlaine expressed his appreciation by dedicating a sonnet to Aman-Jean, and they remained friends for the following four years, until Verlaine’s death in 1896 at the age of only 51.

Still in his twenties, Félix Vallotton was another exhibitor.

At this time, Vallotton was making the transition from his early Naturalism, as seen in La Cuisinière au fourneau, or The Cook at the Stove from 1892. His cook stands at the solid-top range in a kitchen strangely almost devoid of the one thing that kitchens are for: food. The only edible item visible is a bunch of onions suspended in mid-air. Everything – the chairs, pots and pans, and the range itself – is spotless as if they have never been used, and appear thoroughly unnatural.

Following that, he painted his most overtly Nabi painting, Bathing on a Summer Evening during 1892-93. These flattened and stylised figures representing women of all ages have been applied like collage to a background, and would have been in good company with the alpine meadows of Ferdinand Hodler.

One Anglo-French artist who has now been largely forgotten, but was a popular participant in the Salons, was Louis Welden Hawkins. In the mid-1890s, Hawkins made friends with the Symbolist writers Paul Adam and Jean Lorrain, and with Stéphane Mallarmé, and through his soirées met Puvis de Chavannes and Odilon Redon.

The Procession of Souls (1893) was dedicated to the successful sculptor Alexandre Charpentier, who was a close friend. It shows a group of figures with haloes walking slowly along a riverbank, as two cloaked boatmen wait in their small boat on the river – suggestive of Charon on the River Styx. On the opposite bank is a chapel, its windows lit up in the gloom of the half light.

Les Auréoles (Haloes) (c 1891-94) was exhibited in at least one of the Salons de la Rose + Croix, where it was interpreted as depicting the duality of woman as both femme fatale and femme fragile.

Tomorrow I’ll focus on paintings from the last couple of years of the Salons, and a division which helped bring about its end.