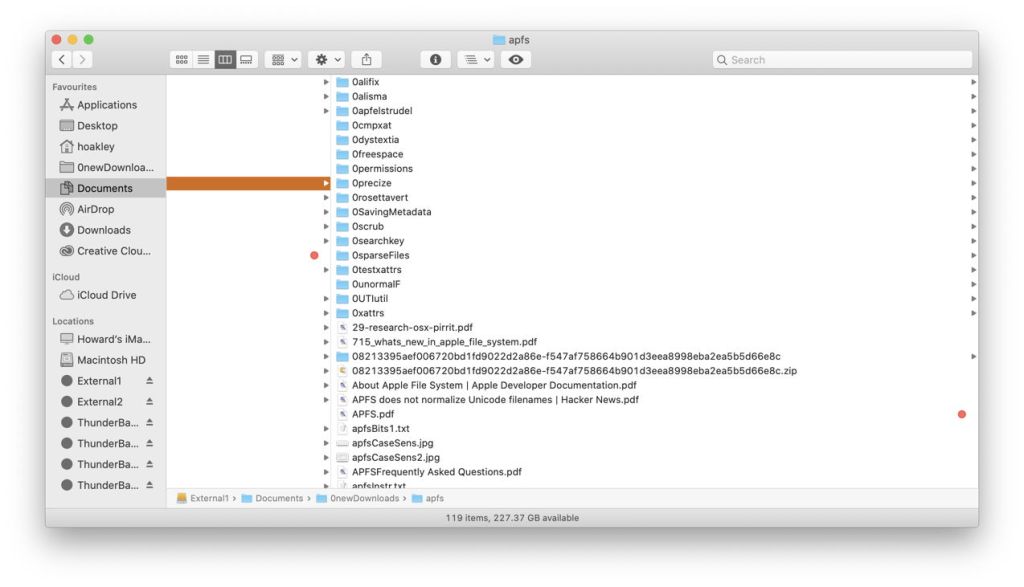 One of the oldest prominent bugs in macOS, which dates back at least six years to OS X 10.9 if not before, is a flaw in the Finder calculating the width of columns, which I’ve named the Finder column width bug. I’ve been moaning about it through successive releases of OS X and macOS over the last five years. If you use Finder’s column views, it’ll catch you sooner or later.

It’s simple to demonstrate. Open a new window in the Finder, and ensure that it’s set to Column View. Select your Documents folder in the sidebar, then select another folder containing more files and folders in the first column, within Documents.

Now click on your Applications folder in the sidebar to switch to that folder. Select an app (one with a long name can sometimes be ideal).

Then click on the Back button to switch back to your previous view of the sub-folder within Documents. More often than not, you’ll now see the second column fill the remaining width of the window, and browsing any deeper into those folders is almost impossible, as the column width settings go haywire.

The simple way to recover is to select a different folder in the first column, which should restore sensible column widths.

This has troubled me for all those years and longer because I prefer to park my Finder windows in that initial position, with two columns filled, giving me ready access to both my Documents folder and my main working folder within that. Every single time that I switch from that to, say, /Applications, the bug strikes, and I have to fart around recovering from it.

After all this time, I’ve finally found a workaround which makes the bug all but vanish in normal Finder use.

To avoid running into this bug, you have to accept that the Finder isn’t currently capable of working as advertised, and parking its windows with two columns filled is an accident waiting to happen. It’s a known limitation which Apple’s engineers are apparently incapable of fixing (now there’s a challenge).

Instead, you must add the folder which you’d normally have open in the first column to the sidebar, and park your Finder windows with just that selected, and only the first column filled with its contents.

If you now go back to /Applications and step back to the parked view, the bug doesn’t happen. It’s still there, of course, if you should end up switching location when two columns are filled, but that’s much less likely now.

I still live in the hope that one day Apple might see its way to fixing this bug, before my grandchildren grow up and have to explain it to their children.