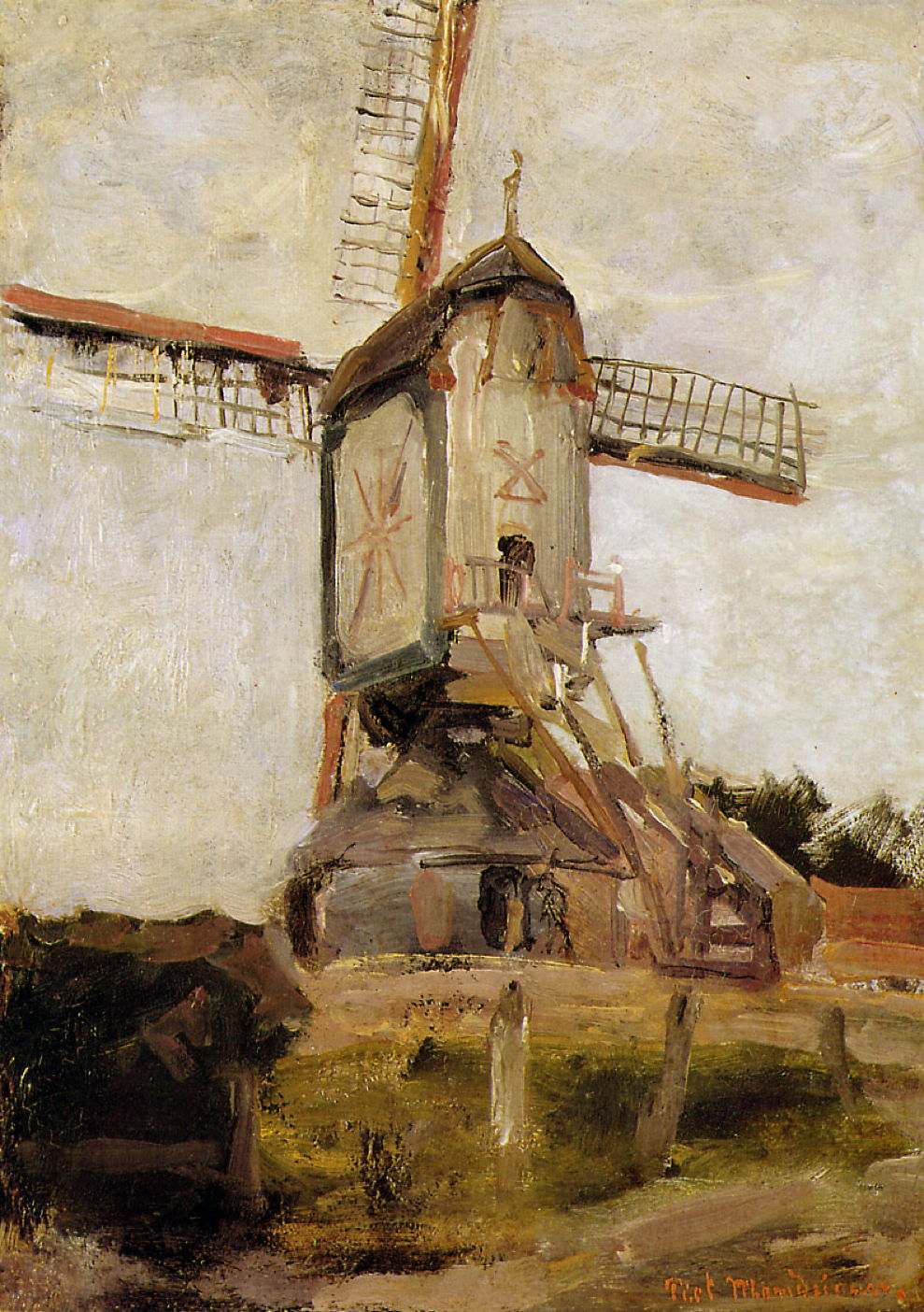 One of the most amazing things in biology is how foetal development appears to step through the changes accomplished over many millions of years in evolution, an observation first made by the great zoologist Ernst Haeckel, I believe, and expressed succinctly as ‘ontogeny recapitulates phylogeny’. In this article and another two parts, I’m going to look at a similar phenomenon in the paintings of Piet Mondrian (1872–1944).

When I was young, I loved Mondrian’s distinctive later paintings of straight lines and evenly-coloured rectangles. As I’ve grown older, I’ve become less enthused, and now can’t see what they’re about at all. Then a few years ago, I discovered that Mondrian had earlier painted in quite different styles, realist landscapes in complete contrast to his later abstracts. In these articles I’m going to look at the evolution of his art, and how it reflected what had happened in art more widely over the nineteenth and twentieth centuries.

Pieter Cornelis Mondriaan – or Piet Mondrian for short – was born in Amersfoort in the Netherlands, not far from the city of Utrecht. His father was a teacher who also taught drawing, and the young Piet showed talent in both drawing and painting. In 1892 he started studying at the Academy of Fine Art in Amsterdam, having already trained as a teacher. He then started work as a teacher, but didn’t abandon his painting.

Mondrian’s earliest paintings, like this marvellous portrait of a small boy in sailor’s rig, were technically accomplished but archaic in their style. Jantje (1896) could have been painted by any of the more traditional artists earlier in the nineteenth century.

He turned to concentrate on landscapes which were in more modern style, as shown in this watercolour of what is described as a Haystack (1897-98), but which looks more like a haybarn to me.

By the end of the nineteenth century he was incorporating devices which had become adopted by more progressive painters only a few years earlier. This view of St. Jacob’s Church, Winterswijk from about 1898 is painted in gouache. Note the dark outlines to forms such as the barren branches of the trees making repoussoir, a feature seen in the mature paintings of Paul Cézanne and Paul Gauguin, for instance.

In 1901, he painted this very conventional portrait of Elisabeth Sophia Maria Cavalini (1873-1933). Those dates indicate that she was about twenty-eight at the time, and appears to have been a local woman.

During the early years of the twentieth century, Mondrian painted many local landscapes of the countryside near Heeswijk, and windmills on the banks of the River Gein, just outside the city of Amsterdam.

These included some gentle nocturnes, such as this view of Oostzijdse Mill on the River Gein by Moonlight from about 1903, which he painted in oils.

Mill at Heeswijk appears to be an oil sketch which he made in front of the motif in 1904.

These sketches became increasingly loose and post-Impressionist, as declared in the title of this painting, Willow Grove: Impression of Light and Shadow which he made in about 1905.

His colour started to become higher in chroma, as shown in this sketched nocturne of The Oostzijdse Windmill by Night from 1907-08.

The year 1908 was important for Mondrian. He became interested in theosophy, and the following year joined the Theosophical Society. He became increasingly experimental in his painting, and started to create some works which were truly radical.

Mill in Sunlight, from about 1908, shows his first major departure. In just over a decade he had worked through what had taken around a century to accomplish. He had overshot his time too, with vibrant colour applied in long and short brushstrokes. This is the sort of painting which you might have expected from Vincent van Gogh had he not died so young. In the next article, I’ll show what else happened to his style that year.