Words matter. Technical writing in particular has to tread a fine line between precision and obscurity. Precision is vital: consider the very different consequences of erasing a disk or a volume, and the distinction between a file and a folder. Obscurity can be equally disastrous when it confuses or obfuscates: imagine a user help document which referred to bundles without making clear what they are.

Like all major publishers, Apple has its own Style Guide, available in its Book Store and on the web. Like all style guides, not all its choices are necessarily the best, but they provide for consistency across terms used in macOS, its Help pages, and support notes.

A couple of days ago, I drew attention to the use of terms in the Finder which I considered amusingly archaic, and in several respects incorrect. This generated a number of comments, so this article is an attempt to clarify the problems which are raised in the Finder’s Preferences. To simplify matters, I take just one section within those, General, and the terms it uses for the categories of items which can be shown on the Desktop.

Let’s say you have a current iMac with an internal SSD, and two external disks, one a hard disk with conventional rotating platters, the other an SSD. You want to set which of those items are shown on your Desktop, so open Preferences in the Finder. 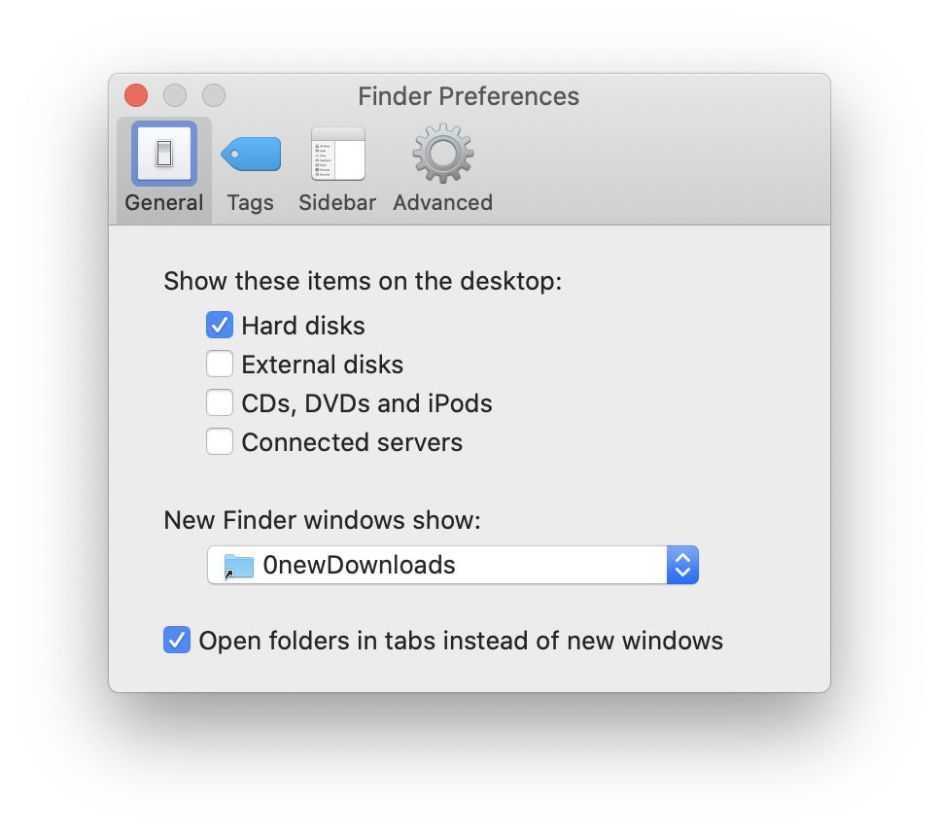 This gives you a choice of four classes of storage which can be displayed on your Desktop, of which I’ll consider the first two. If you enable just the first of those, labelled Hard disks, you’d expect that to show only your external hard disk, as both your other devices are SSDs and don’t count as hard disks in anyone’s reckoning. When you enable the second, labelled External disks, you’d expect just your two external or removable disks to be shown, and not your internal disk.

A little experimentation reveals that both labels are incorrect, or alternatively that the Finder does the wrong things. Tick the item labelled Hard disks, and the startup disk is shown on the Desktop, irrespective of whether it’s a hard disk or SSD, and tick that labelled External disks and all other disks are shown, including the internal disk if that wasn’t used for starting up.

By my reckoning, what those two items should show as labels are Startup disk (in the singular) instead of Hard disks, and Other disks (for non-startup disks) instead of External disks.

What does Apple’s Style Guide have to say?

In this guide, the term disk is normally used to refer to magnetic storage media such as hard disks, but can be used more broadly to include other types of storage such as SSDs. However, qualifying this as hard disk refers specifically to a magnetic disk. When referring to the disk from which that Mac has started up, the correct term for Apple’s documents is startup disk rather than boot disk.

As of December 2019, when it was last updated, the Style Guide doesn’t offer a specific term to indicate disks other than the startup disk. It does though prefer that non- prefixes are used without a hyphen except before proper nouns. So if you wanted to refer to nonstartup disks then that would be compliant, if awkward and somewhat opaque. Similarly terms such as secondary disk don’t have one generally accepted meaning, and aren’t in currency, so should be avoided.

I often criticise Apple for its lack of documentation. In this case its Style Guide is thorough, detailed, makes excellent sense, and is regularly maintained. If you consider that there’s an error in it, you can report that to Apple through its normal bug-reporting mechanisms. But the front end to macOS, the interface which most of us use most of all, blithely ignores the Style Guide and uses labels which are plain wrong.

One final gem from Apple’s Style Guide which merits wider attention is that HD isn’t an abbreviation for hard disk, and I don’t think ever has been within Apple, but for high definition. I’m so glad to learn that my Mac’s startup disk is ‘high definition’.

Oh dear. I seem to have confused everyone again. This isn’t about the type of storage media, such as hard disk or SSD, nor is it about whether the word should be disk or drive. Both of those are clearly set out in Apple’s Style Guide.

The first item in the list of checkboxes in fact doesn’t refer to any specific type of storage, but to its current role – it’s the disk from which your Mac started up. Pure and simple.

The second item doesn’t actually list external or removable disks at all, but those local storage devices which weren’t used to start up from. If you tick both these items, all locally-attached storage other than optical drives and iPods, and network drives, should therefore be shown on the Desktop.

The current labels shown are therefore completely wrong, and need to be corrected.

The term startup disk is included in the Style Guide for use in user documentation, and so it should be. It is readily understood without any technical knowledge – it’s the drive from which that Mac has started up, the clues being given in those two words. It also happens to be the name of one of the panes in System Preferences, and is already covered in Help files for those who are struggling to understand its meaning.

The only correct alternative to startup disk is boot disk, which the Style Guide explicitly forbids in user documentation, quite rightly, as ordinary users are unlikely to understand the word boot.

If this isn’t corrected, it would actually be just as accurate and informative to label those two items thingamajig and dooberry, which might at least be mildly amusing, no more incorrect, and just as informative.

I am amazed at any engineer who looks at that window, knowing what those two options really do, but won’t correct them. They’re blatantly incorrect, and they should know so.