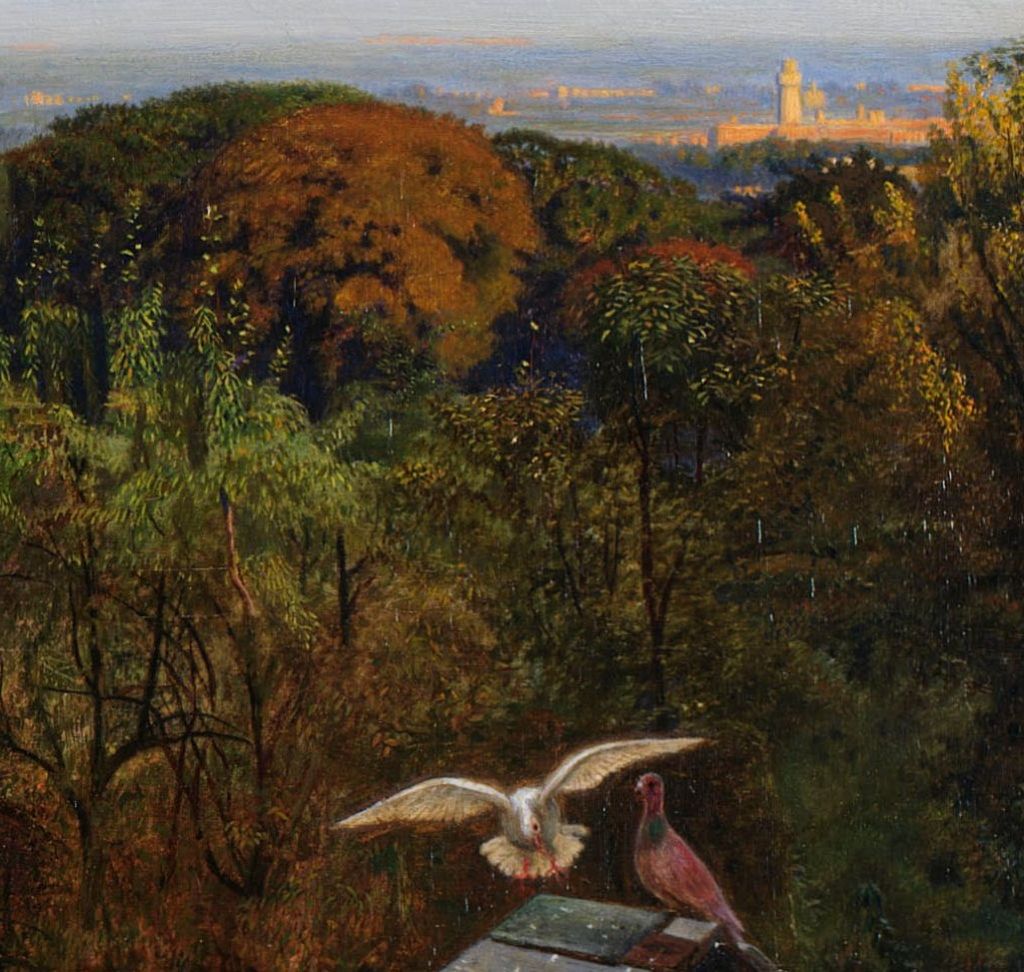 The most significant movement in British painting history in the nineteenth century was the Pre-Raphaelite, but few of the most important British painters of that century were members of the Pre-Raphaelite Brotherhood (PRB) itself. One of the leading narrative artists was close to the PRB, very influential over it, but pursued an independent style of his own: Ford Madox Brown (1821–1893). But he wasn’t really a Pre-Raphaelite at all, painted many narrative works, and was teacher and career-long mentor to Dante Gabriel Rossetti, the dominant painter of the PRB.

In this short series, I’m going to explore a selection of Brown’s narrative and landscape paintings.

Brown, or Madox Brown perhaps, had comparatively humble origins: his father was a purser in the Royal Navy, who married into an old Kentish family with the surname Madox, which was passed down as a middle name, not the first part of a ‘double-barrelled’ surname. The family moved between lodgings in the Pas-de-Calais and the houses of relatives in Kent. When Brown showed artistic talent, they moved to Bruges for him to study in the academy there, on to Ghent when he transferred there in 1836, and the following year to Antwerp.

By 1840, when only his father survived, Brown first exhibited at the Royal Academy. The following year he married for the first time, and moved with his wife and father to Montmartre in Paris.

Inspired by Byron’s ‘metaphysical drama’ Manfred (1816-17), Brown painted Manfred on the Jungfrau when he was in Paris in 1842, the year that his father died there. It follows Byron’s Faustian theme, and appears to have been influenced by the paintings of Caspar David Friedrich. Manfred is stepping precariously over a cornice on the Jungfrau mountain, his guide looking on in horror. Manfred’s face is also familiar as the expression of madness in Gustave Courbet’s contemporary self-portrait The Desperate Man (c 1843).

Although Brown met with little success at this stage of his career, an early admirer was the young Dante Gabriel Rossetti, who asked him to be his teacher in 1848, and thereafter Brown remained Rossetti’s mentor. Despite that, Brown stayed independent of Rossetti’s nascent Pre-Raphaelite Brotherhood. He found the money to travel too, visiting Basel in Switzerland in 1845, and Rome in 1845-46, where he admired the paintings of Holbein and Friedrich Overbeck in particular. Brown’s first wife died in Paris in 1846, as the couple were returning to England from Rome.

Brown lived with his model Emma Hill, the daughter of a working-class bricklayer, and Brown’s model at the time, from 1848, and they finally married in 1853.

When Brown was still struggling for recognition in 1847, he started work on his largest and most complex narrative painting, Chaucer at the Court of Edward III, which he exhibited in 1851. It was also his first attempt to show realistic natural sunlight and shadow, following the Pre-Raphaelite ideal of ‘truth to nature’. As a narrative painting it is perhaps a little over-ingenious: the poet and his monarch are shown towards the top of its crowd, with Chaucer in religious garb, and the King looking at him as he reads from his lectern. They are surrounded by characters from Chaucer’s Canterbury Tales (1387-1400), and the distant rolling coastal countryside of south-eastern England.

In 1854, Brown simplified this in a watercolour copy of just the central story, shown below, which demonstrates the virtue of its greater simplicity.

Over the same period, he painted the first scholar to translate the Bible into (Middle) English, John Wycliffe Reading His Translation of the Bible to John of Gaunt (1847-48, 1859-61). Wycliffe’s translation was completed by the time of his death in 1384. John of Gaunt, the Duke of Lancaster, was a son of King Edward III and a major statesman who would have been 44 at the time of Wycliffe’s death. Brown probably modelled the figure of John after a portrait painted in about 1593 by Edward Hoby, two centuries after the Duke’s death.

Having tried the literary and erudite, Brown turned to more populist themes in the 1850s.

Today his Pretty Baa-Lambs (1851/9) may appear a sickly-sweet over-sentimental pastoral, which is almost devoid of narrative, but it adhered to the ideal of ‘truth to nature’ in almost all respects apart from the unnatural positions of some of the sheep. Although the distant landscape suggests this was painted on the north coast of Kent, Brown spent about five months painting this during the summer of 1851, mostly at his house in Stockwell, south of London. Each day when the weather was suitable, providing the full sunlight he required, the lambs and sheep were driven from their grazing on Clapham Common to Stockwell to act as models.

The dates and background to this incomplete painting Take your Son, Sir! remain unclear. It’s thought that Brown started work on this in 1851, although it clearly shows his second wife Emma with their newborn son. Their first son, Oliver, wasn’t born until 1855, and their second, Arthur, in September 1856, which would suggest that Brown didn’t start this until at least 1855. It’s generally held that this shows not Oliver, who lived until 1874, but Arthur, who died aged ten months in July 1857, at which time Brown abandoned the painting.

It’s most interesting for the detail seen reflected in the mirror, which shows a contemporary living room and a man, presumably a self-portrait. This is reminiscent of Jan van Eyck’s Arnolfini Wedding (1434). The artist’s wife appears to be pale and flushed, as if the labour wasn’t free of incident either.

This painting also appears to have had an interesting history, in that it was presented by the sisters of John Singer Sargent to the Tate Gallery in memory of their brother, perhaps from his personal collection.

Brown then turned to a landscape in pure Pre-Raphaelite style, An English Autumn Afternoon, 1852-1853, which he painted during the whole month of October in 1852, from his landlady’s bedroom window in Hampstead. This intricately detailed view (below) over Hampstead Heath to the churches of Highgate in the suburbs of London was finally completed after a further two months work in the Spring of 1854. He sold it in June of that year.

Brown also tried some social realism, in Waiting: an English Fireside of 1854-55, which he is thought to have painted in the period 1851-55. Dates are again a problem here: the years of the title almost certainly refer to the Siege of Sevastopol (1854-55) during the Crimean War (1853-56), making it unlikely that he started this work as early as 1851.

The mother and child shown are clearly waiting alone for the return of the husband-father. Unlike later ‘problem pictures’ which provided ample visual clues to the underlying narrative, the only obvious references in the painting to its background are an open locket on the table at the left showing a portrait of a man in scarlet military uniform, and what appears to be a letter underneath it.