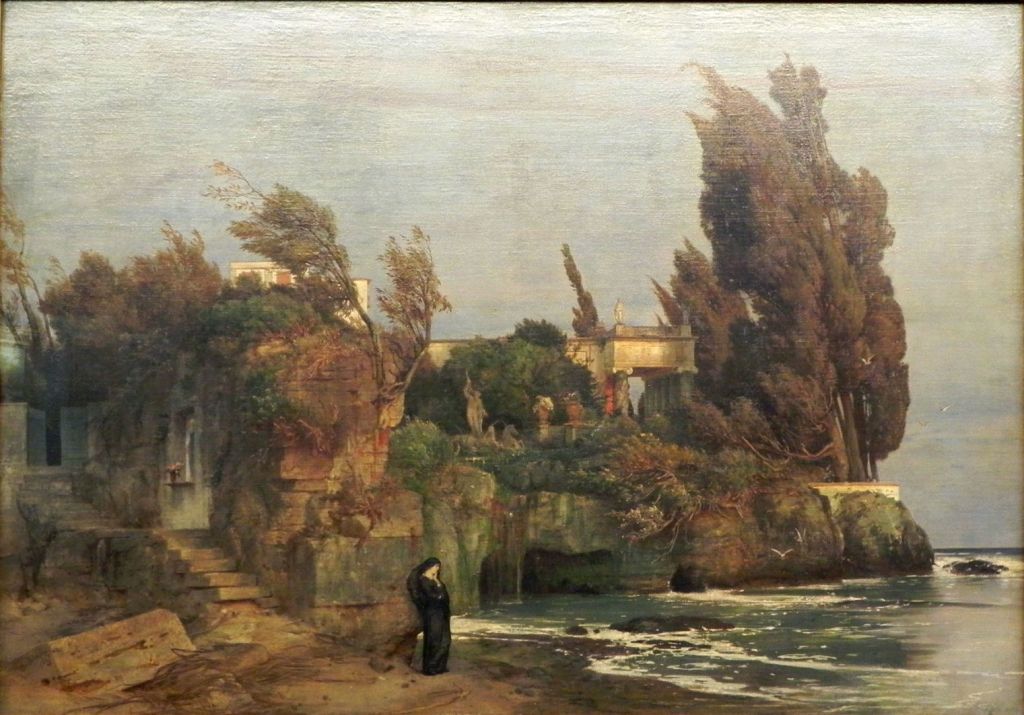 In my survey of nineteenth century artists who were major influences on the development of Symbolism after 1886, I have now reached Arnold Böcklin (1827–1901), a major Swiss painter who, at the time, was extremely well known, and some the works that I’ll show in this article and its conclusion tomorrow were among the best-known paintings of their day.

Böcklin painted many portraits, narrative works particularly of mythology, and landscapes. I have already looked in detail at his narrative paintings.

Böcklin was born in Basel, Switzerland, and studied at the Düsseldorf Academy, where he became a friend of Anselm Feuerbach. During his training, he visited Antwerp and Brussels, then in 1848 went to Paris to copy in the Louvre.

His early landscapes were technically accomplished, mainly upland views such as Mountain Lake from 1846, which are typical of Swiss landscape painting at the time.

Böcklin, though, soon showed interest in motifs which derived more from German artists of earlier in the century, including Caspar David Friedrich and his friend and pupil Carl Gustav Carus. Landscape with Castle Ruins from 1847 is an example of this ‘Gothic’ Romantic style, its serene halflight full of foreboding.

Megalithic Tomb (1847) introduces anonymous figures who appear to be engaged in a mystical ceremony at this isolated location just below the snowline in the mountains. In the foreground is a boggy lake with a heron-like bird stepping out from cover.

Even relatively plain landscapes start to acquire a feeling of something else. In his Mountain Landscape with Waterfall from about 1849, the foreground is in shadow, and the distant peaks are well-lit. Visible at the right of the waterfall is a wild animal, and there’s a shadowy figure perhaps in the lower right corner. Or maybe it’s just the light playing tricks.

In 1850, Böcklin moved to Rome, where he started to paint in the Campagna.

In the Alban Hills from 1851 is a fine depiction of the landscape in these hills, which are about 20 km (12 miles) south-east of the city of Rome. Unlike many artists working in the Campagna at the time, Böcklin must have painted this work in the studio from extensive sketches and studies made in front of the motif. Look closely, though, and there’s a dark figure standing beside a small smoking fire, to the left of the central mass of trees, and further to the left is what appears to be the entrance to a dark cavern.

Böcklin uses more dramatic lighting in his Roman Landscape from 1852. Its dark wood is very dark indeed, not the sort of place to enter alone. At the foot of the prominent tree at the right is a figure which appears to be a woman undressing, as if she is going to bathe in the stygian gloom.

When he was in Rome, in 1853, Böcklin married, and started to raise his family there. Six years later, though, he nearly died of typhoid. By that time, his mythological paintings were achieving critical recognition, and he was appointed professor at the Weimar Academy in Germany. He stayed there for two years before moving back to Rome in 1862, where started work on his first major landscape painting: Villa by the Sea.

Böcklin painted his first version of Villa by the Sea in 1864, using a mixture of encaustic (wax) paints and resins. Those have sadly not aged well, but it shows a romanesque villa at the water’s edge. Beside it is a small bay, where a woman stands looking at the sea in front of her.

Böcklin painted a second version the following year, using more conventional oil paints, which is more readable. The villa now appears overgrown and partly in ruins, its cypress and other trees leaning away from the prevailing wind. The woman, dressed in black, is now cradling her head with one hand as she looks at the sea.

In another version painted between 1871-74, now in the Städel in Frankfurt, it is last light, with a band of cloud on fire with the last rays of the setting sun. Although the garden of the villa is well-grown, it appears in much better condition, and the woman still stands staring at the sea.

Modern reading of these paintings has been greatly influenced by an account of them published by William Ritter in 1895, which states that they tell the story of Iphigenia in Tauris. Although Ritter appears to have consulted with the artist, Böcklin himself isn’t known to have confirmed this, and there are no specific clues in any of the versions of his paintings.

Iphigenia was the daughter of Agamemnon and Clytemnestra, who was to be sacrificed to give the Greek fleet favourable winds so that they could attack Troy. There is no coherent account of her fate, but in one version her life was spared, and she was rescued to become priestess of Artemis on Tauris. There, she watched for the arrival of sailors, who would be captured to be offered in sacrifice to Artemis.

The painting would thus be centred on waiting, death, and the passage of time, which are at least consistent with what Böcklin depicted. We can only speculate whether that was the artist’s intention.

Böcklin continued to move between Germany, Switzerland and Italy. In 1866, he went back to Basel, then on to Munich in 1871, where he painted the last work in this article.

In his Mountain Castle with a Train of Warriors from 1871, a small band of warriors clad in scarlet are making their way up a track towards an ancient castle overlooking a valley. Down below them, amid a stand of cypress trees, is a villa. There are no other clues as to the underlying narrative.