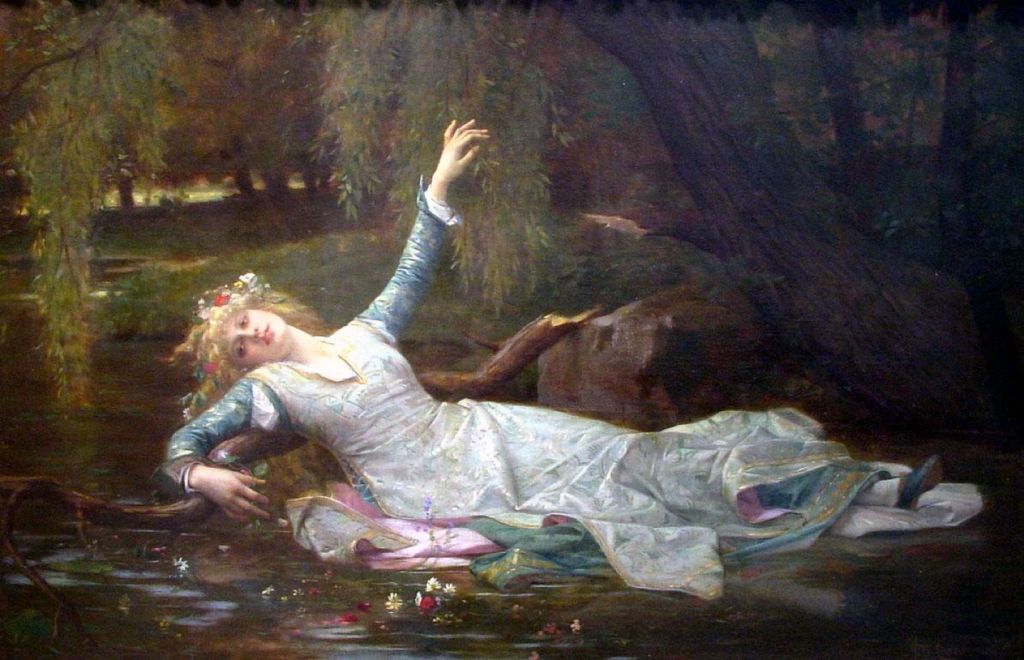 The great majority of narrative paintings refer to a well-known story, which the viewer is expected to recognise and recall when they try to read the painting. This is because stories refer to at least two moments in time, and a conventional painting can only show one. Among the best stories to use, at least from the late eighteenth century onwards, are those from the plays of Shakespeare. And painters did with scenes from Romeo and Juliet, King Lear, Hamlet, and others.

Shakespeare’s plays show profound insight into people, and the character Ophelia is a fine example. Caught up in a royal family’s internal feuding and murder to gain power, Ophelia grows increasingly deranged by events and her treatment, until she finally drowns herself in a brook.

In one of the earliest well-known paintings of the play, in 1792, Benjamin West picks Hamlet: Act IV, Scene V (Ophelia Before the King and Queen). This was originally intended for inclusion in the Boydell Shakespeare Gallery in London. John Boydell was an engraver and publisher who decided to exploit popular interest in Shakespeare’s works in an ambitious plan for a gallery of paintings of scenes from them, prints for general sale, and an illustrated edition of the plays. But he failed to secure the necessary support, and the paintings which he commissioned, including this one, were sold off in 1805, leaving Boydell’s company in bankruptcy.

Ophelia is seen in white, in a state of madness, with the king and queen becoming concerned for her at the right. Inevitably, given the nature of Boydell’s project, the painting is theatrical rather than a conventional narrative.

It was Eugène Delacroix who first seems to have realised the visual potential in Ophelia’s drowning. His first painting of The Death of Ophelia in 1838 follows Queen Gertrude’s account of events in Act 4 Scene 7. In that, Ophelia climbed into a willow tree whose branch broke, dropping her into the stream below.

Fifteen years later, in 1853, Delacroix returned to the story and painted The Death of Ophelia again, just as loosely but with richer chroma. Although the artist has reversed the image here, she is still holding onto the branch of a tree, and about to be carried away to her death.

Still the most famous painting of this scene, I have recently detailed the story behind John Everett Millais’ painting of Ophelia from 1851-52. It’s the first depiction which ignores Queen Gertrude’s account in favour of a more tragic-romantic self-drowning. Millais uses the intricate symbolism of flowers to add great nuance, and a real landscape setting with lush vegetation.

There is a deeper and more poignant tragedy here too, in that Lizzie Siddal, Millais’ long-suffering model for this work, died just a decade later at the age of only 32, from an opium overdose which may well have been suicidal.

At the same time that Millais was being eaten alive by midges when painting in the deepest Surrey countryside, Arthur Hughes, another Pre-Raphaelite, was hard at work on his first painting of Ophelia, which he completed slightly later.

It shows Ophelia sat under a willow tree, by the stream in which she was shortly to drown herself, having been driven to madness by Hamlet’s murder of her father, and his rejection of her love. To ensure that the viewer is in no doubt as to the moment which he shows us, Hughes inscribed the relevant lines from Hamlet Act 4 Scene 7 around his painting. But it lacks any sense of the imminently tragic outcome, relying on its text and the viewer’s own knowledge of the play.

Despite that reference to a scene which takes place inside the castle, Hughes has painted Ophelia minutes before her drowning, when she is picking wild flowers and standing in front of an old willow tree which overhangs a much more substantial body of water. The latter is almost black in the deep shade, and is revealed as water only by the presence of a few bright reflected objects on its surface.

Two years after his wife Lizzie Siddal’s death, Dante Gabriel Rossetti painted this watercolour of The First Madness of Ophelia (1864). This shows Act 4 Scene 5, essentially the same as Benjamin West’s painting above, with Ophelia being comforted as she talks in riddles and rhymes in front of the king and queen.

A couple of years later, Rossetti’s watercolour of Hamlet and Ophelia (1866) moves even earlier in the play, and becomes more remote from her tragic death. I wonder how much this may have been influenced by his own thoughts and emotions about Lizzie Siddal’s death.

When Jules Bastien-Lepage died suddenly in 1884, he left his unfinished painting of Ophelia which he had started in 1881. Her anguish is about to drive her body down into the water, and drown there. At the time of his death, Bastien-Lepage still had to paint all the foreground detail. This would have covered the lower half of the canvas, and given it his usual finely-detailed appearance.

Jules-Élie Delaunay painted this beautiful portrait of Ophelia in 1882, whose only narrative references are the careful choice of flowers. Without knowing its title, most viewers would be hard-put to work out who it represented.

The following year, it was the turn of the academic painter Alexandre Cabanel to try his hand at Ophelia (1883). I suspect that he had the benefit of seeing both Delacroix’s and Millais’ paintings, and opted to return to Queen Gertrude’s account involving the broken willow branch. By a curious twist of fate, Bastien-Lepage had been Cabanel’s former pupil, although at that time, before Bastien-Lepage’s untimely death, it’s likely that Cabanel was unaware of his former pupil’s unfinished painting.

My last image of Ophelia for today isn’t a painting, but an etching made in 1889 by the now almost-forgotten Anna Lea Merritt. Like Delaunay, she opts for a non-narrative portrait, which may have featured one of the popular actresses of the day.

Tomorrow, I’ll resume this story the following year, when painting Ophelia became something of an obsession for some artists at least.