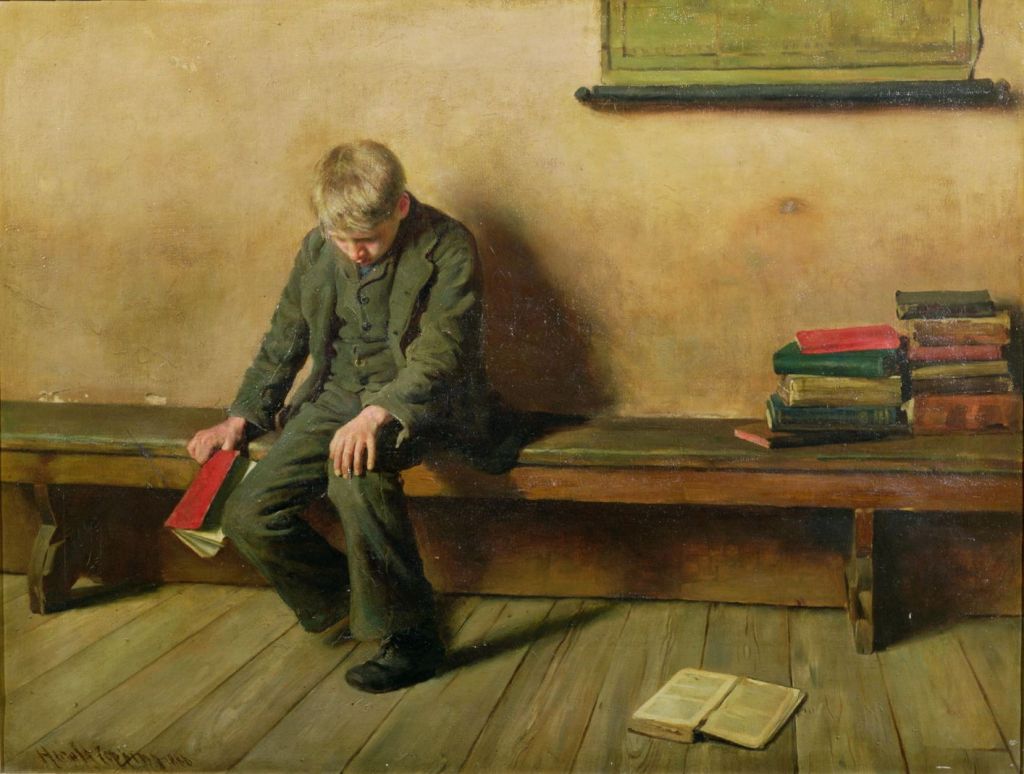 Ever since Charles Dickens’ A Christmas Carol was published in 1843, its character Scrooge, author Dickens and Christmas have been strongly associated in the English-reading world. It happens this year that Christmas is bracketed by two Dickens-related anniversaries too: tomorrow, 22 December, is the centenary of the death of his son-in-law the painter Charles Edward Perugini, and on the ninth of January, we’ll be celebrating the bicentenary of the birth of William Powell Frith, a friend of Charles Dickens who painted one of his best portraits.

For such a best-selling author, Dickens’ books have been extensively illustrated but surprisingly seldom painted. In this article I look briefly at two painters associated with Dickens whose careers changed: Charles Collins and Harold Copping.

Charles Allston Collins (1828–1873) was an early member of the Pre-Raphaelite circle. He met John Everett Millais around 1850, when he had painted his first rather curious history painting.

The Pedlar or Berengaria’s alarm for the safety of her husband, Richard the Lionheart (1850) shows the wife of King Richard I of England, Berengaria of Navarre, taken aback when she sees a man’s belt being offered for sale by a pedlar in Rome. She recognises it as belonging to her husband the king, which makes her realise that his life is in danger. At the time, King Richard was missing.

Behind the queen is a tapestry showing “The History of Joseph”, making reference to the Biblical story of Jacob and Joseph’s ‘coat of many colours’, which was a popular theme for paintings at the time. This story is also apparently referred to in the text of the open books in the foreground, although in this image they are unreadable.

King Richard is a well-known English monarch who was absent for much of his reign when he was on the Third Crusade. Berengaria lived much of the time in the English possessions in France, and never even visited England before the King’s death.

With its flat modelling, mediaeval theme, and other traits this is typical of the early phase of Pre-Raphaelite painting. With Millais’ support, Collins was put forward as a member of the Pre-Raphaelite Brotherhood, but others objected and he was excluded from the group.

Collins continued to move in Pre-Raphaelite circles, and fell in love with with Dante Gabriel Rossetti’s sister, Maria Francesca (1827-1876). However, she rejected him. He expressed his unrequited love in Convent Thoughts in 1851, with its floral symbolism in white lilies and water lilies.

The Collins family home overlooked Regent’s Park in central London, and in 1851, Collins painted this view of the park, most probably from that house. May, in the Regent’s Park also lacks depth, despite its painstaking detail. When it was exhibited the following year, it was held up to ridicule by the critics.

At some stage, probably in the early 1850s, Collins painted this watercolour of Lost Love. It shows a young woman kneeling in prayer at what appears to be a tombstone in the middle of nowhere, and is strangely prophetic.

Collins married Kate Dickens, daughter of the author Charles, in 1860. By this time, he had abandoned painting and turned to writing, something which his brother Wilkie Collins was already extremely successful at. Charles Dickens welcomed Collins into his extended and creative family. Although he was later engaged to illustrate Dickens’ last and unfinished novel, The Mystery of Edwin Drood, he became ill with cancer and only completed the cover. Charles Collins died in 1873.

Kate, herself an enthusiastic painter never well-known for her art, married a second painter, Charles Edward Perugini, the following year.

Harold Copping (1863–1932) was an extremely promising young painter when he studied at the Royal Academy Schools in London, so much so that he was awarded a scholarship to study in Paris.

The only early painting of his which I have been able to locate is this fascinating portrait of The Dunce from 1886. Assuming that this was painted after he would have seen Naturalist depictions of children in school, it is tempting to conclude that Copping was at least influenced by Naturalism during his time in France.

Copping seems to have picked up progressively more work as an illustrator than as a fine artist. During the late nineteenth and early twentieth centuries, his watercolours showed scenes from several of Dickens’ novels, Shakespeare’s plays, and the Bible.

Copping’s undated illustration of Barkis Takes David to Yarmouth for Dickens’ David Copperfield is typical of the many that he made over this period.

This illustration of Shakespeare’s Ophelia drowning, Hamlet, Act IV, scene 7 from 1897 appears to have been influenced by some of the great paintings of this scene, including that of John Everett Millais (friend of Charles Collins) from 1851-52.

His religious works were also very popular. He had strong links with the London Missionary Society in particular, who often commissioned his work. I don’t know for whom he made this undated oil painting of A Medical Missionary Attending to a Sick African, but it is his only other oil painting which I can locate.

The white missionary is thought to have been based on an engraving of Henry Morton Stanley which was published in 1872. He is working from a medical chest supplied for missionary doctors to replace traditional healing, symbolised by the discarded animal horn in the foreground. Behind him is the vision of Christ.

In 1885, the great Anglo-French painter James Tissot had started making a series of 365 gouache paintings of the life of Jesus Christ, which were published in 1896. Copping started work on his illustrated edition of the Bible at about the time of that publication. Like Tissot before, Copping visited the Middle East to try to achieve greater authenticity, although by that time all the locations had changed so greatly that their appearance would have had little relevance to his painting.

The Copping Bible was published in 1910 and quickly became a best-seller, and was followed by several other illustrated collections of bible stories, up to his last in 1931, a year before his death.

Among Copping’s other illustrated books from the early twentieth century were re-tellings of the novels of Charles Dickens written by the author’s grand-daughter Mary Angela Dickens (1862-1948), who was Kate Dickens’ niece. Mary was apparently a favourite of her grandfather, and as a child attended one of his last public readings, of A Christmas Carol.