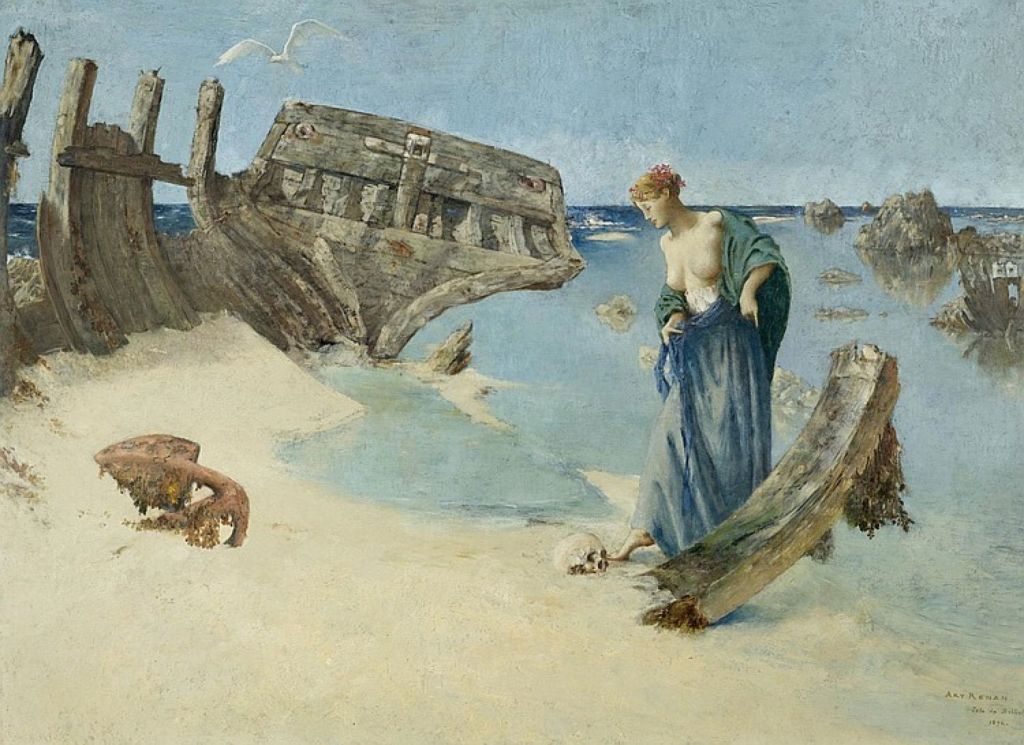 Today, Gustave Moreau and Odilon Redon may seem like isolated mavericks in a sparkling sea of Impressionism, against a conservative background of conventional realists who filled the Salons of late nineteenth century Paris. They were not alone, it is just that their friends and colleagues have been forgotten. This article is about one such artist, who is well on his way into oblivion, Ary Renan.

Ary Renan (1857-1900), also Cornélis Ary Renan, was born into an artistic Breton family in Paris. He studied under Élie Delaunay and Pierre Puvis de Chavannes at the École des Beaux-Arts in Paris, and started exhibiting his work from about 1880. He became very good friends with Gustave Moreau, and published the first biography of Moreau in 1900.

Portrait de Noémi Renan à dix-sept ans (Portrait of Noémi Renan at Seventeen) dates from around 1879, and most probably shows Renan’s younger sister, in a conventional portrait against a coastal background.

Fairly early in his career, Renan developed a recurrent theme of a woman standing by the sea, with a man in the water, offering her a gift. Although this undated charcoal drawing purports to show Andromeda, it is hard to see how it might match the classical myth, and it may have been a study for his painting Le Plongeur.

This graphite drawing is identified as a preparatory study for Le Plongeur, and was made in 1882, in common with the finished painting below.

Le Plongeur (The Diver, The Coral Fisherman) was completed in 1882 and exhibited in the Salon of that year, and seems to have been one of the first of Renan’s distinctive paintings. A (male) coral diver has just returned to the surface, and is resting against rocks, his eyes closed with exhaustion. His right hand holds a shell and a long stream of coral mixed with seaweed, which he has presumably just taken from the bottom of the sea by those rocks.

Standing by him is a partially-clad young woman, whose robes are blowing in the breeze. She stares impassively, not at the diver, but into the distance. His clothes are draped on the rocks behind her, and near her feet are several fragments of coral.

This unusual and enigmatic work seems to have been well-received, and in 2014 was purchased by the Columbus Museum of Art, where it is on display.

Two years later, Renan exhibited another unusual painting, sometimes known as Jeune femme dans les rochers (Young Woman among Rocks), but I think more properly titled Le Léthé (Lethe) (1884). This coast is more rugged, probably inspired by part of the Breton coast, and within its rocks is a large pool. At one edge of that is a young nude woman with hair so long that it cascades over her shoulder and drops below her waist.

Apart from being one of the rivers of the Underworld, Lethe is the Greek personification of forgetfulness and oblivion; Renan is probably citing her from Baudelaire’s poem in Les Fleurs du Mal (1857, 1861).

That year, together with Jacques Émile Blanche (1861-1942), Renan organised and exhibited at the first Salon des Indépendants at the Galerie Georges Petit in Paris. Other artists represented there included Odilon Redon, Fernand Khnopff, and more.

Although undated, I suspect that Renan painted La transformation de Daphne (The Transformation of Daphne) at about this time. This unfortunately low-quality image shows the well-known myth of Daphne being transformed into a laurel tree when she tried to escape from Apollo, as told in the first book of Ovid’s Metamorphoses. Unusually, Daphne’s back is turned to the viewer, and Apollo is nowhere to be seen.

The brief biographies currently available all state that Renan had an unspecified physical disability. In spite of that, he travelled extensively in the Middle East and North Africa. His father was a historian noted for his anti-clerical views, and Ary Renan had similar opinions, which resulted in him co-founding a movement to develop secularism in Brittany. He was appointed to the Legion of Honour in 1895.

Women of Algeria is a fine sketch in ink and gouache made by Renan in about 1891, when he was travelling in North Africa.

The next oil painting which I have located dates from 1892: Jeune fille contemplant un crâne près d’un bateau naufragé au bord de la mer (Young Woman Contemplating a Skull by a Shipwreck on the Beach). According to Renan’s inscription, this view is of the Île-de-Bréhat, a small cluster of islands one mile off the Channel coast of Brittany, towards the Channel Isles.

Its title summarises the enigmatic motif: a young partially-clad woman is stood on a sandy beach. By her right foot is a human skull, partly buried in the sand. She is looking down at it. Around her are the remains of an old wreck, a wooden ship, whose broad stern fills much of the upper half of the painting. At the left, in line with the woman’s arched foot, is an old anchor protruding from the sand. At the right is one of the timbers, resembling a massive human rib.

Like his friend Gustave Moreau, Ary Renan made at least two paintings of the great classical Greek poet Sappho.

The first, from 1893 (above), has similarities with Moreau’s paintings, and those of Odilon Redon. Sappho reclines amid a fantastic and deep layer of vegetation, her lyre some distance from her head, at the right edge. It is impossible to tell whether she is asleep on land, or whether this is all underwater, perhaps after she had jumped from the Leucadian cliff, to commit suicide.

This sadly blurry image of an updated painting of Sappho shows her just as she has stepped off the top of the Leucadian cliff, and is about to plunge to her death. She holds her lyre aloft in her left hand, and a surprised seagull flies past.

Charybdis and Scylla (1894) is a highly imaginative depiction of one of the dangers to mariners in the Strait of Messina, between Sicily and the Italian mainland. Scylla was said to be a six-headed sea monster, but was actually a rock shoal, and Charybdis was a whirlpool.

Renan shows both together, the whirlpool with its mountainous standing waves at the left, and the rocks at the right, with the form of a beautiful mermaid embedded in them.

Renan also appears to have become an accomplished lithographer. La Phalène (The Moth) shows his own print version derived from a drawing, and exhibited at the Salon du Champ-de-Mars (a modernised rival to the official Salon) in 1895. This is reminiscent of some of the drawings and prints made by Odilon Redon. A woman is looking at her reflection in a huge plane mirror. In reality she has the wings of a moth, which sprout from between her shoulder-blades.

As well as his painting and drawing, Renan wrote poetry and non-fiction: his account of the history of dress in France was first published in 1890, was awarded two prizes, and ran to 36 editions in all. It is available here. In addition to his biography of Moreau, he was published as an art critic, and wrote an account of Japanese art.

Completed in his last months, this fine portrait of Madame Jules François Dietz (1900) shows a family friend, in the portraiture style of Manet.

This engraving of La Douleur d’Orphée (The Pain of Orpheus) was published posthumously in 1903. It shows Orpheus after he had discovered the body of his bride Eurydice, who fell into a nest of adders and died of snake bite on the day of their wedding. He is clutching his lyre in his grief.

Ary Renan has not yet been completely forgotten. In 1994, Blandine Bouret wrote a thesis about his work, and a symposium was held in 2006. Images of his paintings are very hard to come by, and biographical details scant, as you have seen. I hope that his painting now in Columbus might rekindle interest in his distinctive, fascinating, and beautiful paintings.