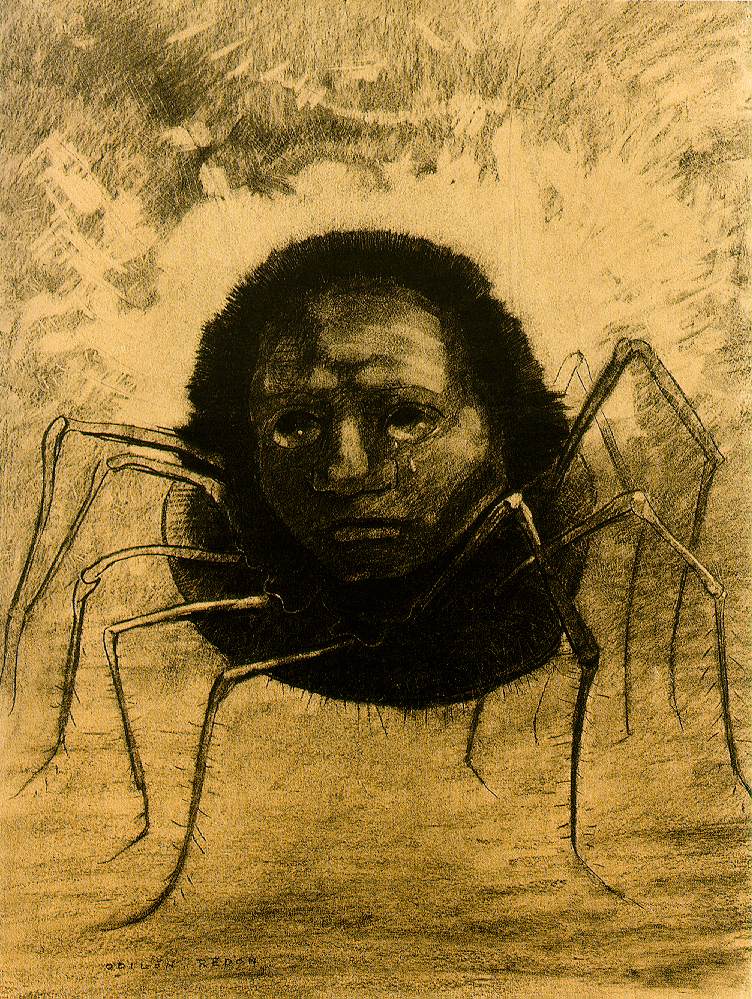 This year has seen major international celebrations of the lives and work of Hieronymus Bosch, William Merritt Chase, and Thomas Eakins. I have barely seen mention, though, of another important anniversary, of the death of Odilon Redon (1840–1916). Like William Blake, Redon was far ahead of his time, and even today his remarkable art is little-appreciated.

He was born as Bertrand-Jean Redon, but acquired the nickname of Odilon from his mother’s name, Marie-Odile. As an infant, he remained in the Medoc owing to his ‘delicate’ health, and did not live in the city of his birth, Bordeaux, until 1851. He started to receive drawing lessons in 1855, and in 1859 prepared himself to try to gain admission to the École des Beaux-Arts in Paris, to study architecture. His bid was unsuccessful, though, so in 1863 he moved to Paris to work in the studio of Jean-Léon Gérôme. Sadly, that did not work out either, so he returned to Bordeaux, where he learned etching and lithography under Rodolphe Bresdin.

During the Franco-Prussian War of 1870, he served as a private soldier in the Loire. Once the Paris Commune had been suppressed in 1871, he returned to the capital, where he was welcomed into literary and artistic circles. During this early stage in his career, most of his works were etchings and prints, but he also drew in charcoal, and painted a little. In 1875 he visited Barbizon and Fontainebleau, and in 1878 travelled to Belgium and the Netherlands.

His first volume of lithographs was published in 1879 under the title Dans le rêve (In the Dream), and his charcoal drawings and prints were exhibited in 1881. At about this time he started to paint more seriously, making oil sketches en plein air in Brittany, in Impressionist style.

Village by the Sea in Brittany (c 1880) is one of the earliest of his oil sketches to survive.

Breton Port is an undated view from this period.

Rocks on the Beach (c 1883) shows his developing skills and style.

In 1884, he was one of the founding members of the Salon des Artistes Indépendants, which elected him their President. In 1886, he exhibited at the Salon of the XX in Brussels, and in the last Impressionist Exhibition in Paris.

Breton Village (c 1890) has moved away from early Impressionism, with its more gestural treatment of the flowers and leaves in the foreground.

Although thoroughly competent, his paintings at this time were far more traditional than his charcoal drawings and prints.

l’Araignée qui pleure (The Crying Spider) (1881) is an extraordinarily inventive chimera of spider (with an extra pair of legs) and the head of a man.

Caliban (1881), another charcoal drawing, shows the subhuman witch’s son who plays a leading role in Shakespeare’s play The Tempest.

Chimera (1883), drawn using charcoal and black chalk, shows one of his early recurrent themes, of eyes looking out, and spiral tails of imaginary creatures.

Eventually, his strange images migrated from his drawings and prints to his canvas, in paintings such as Les Yeux Clos (Eyes Closed) (1890). Redon then abandoned his drawing, and concentrated more on painting and prints. In 1890, he exhibited again in the Salon of the XX in Brussels. Durand-Ruel became his agent, and in 1894 organised his first solo exhibition, which also travelled to the Netherlands and Belgium.