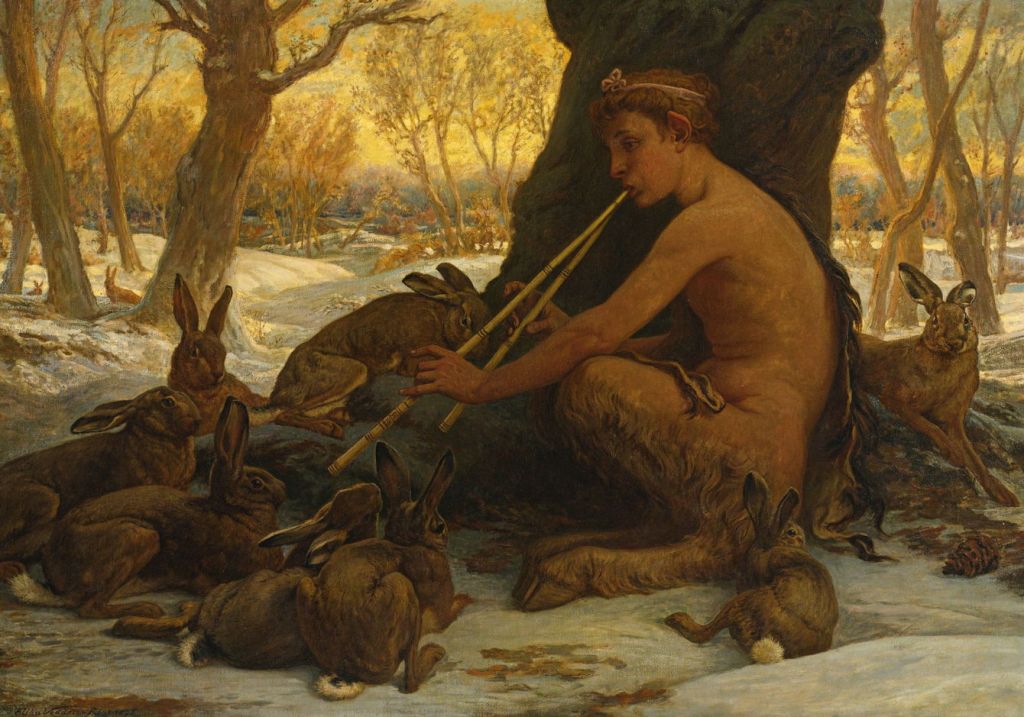 Following the relatively light relief of the tale of Lycian peasants who were turned into frogs because of the scorn that they showed the goddess Latona, Ovid briefly covers the horrific story of Marsyas, adding an odd intercalation about Pelops.

Ovid links to the story of Marsyas through Latona: the twins born to her in Lycia were Diana and Apollo, and this is about the divine retribution of the latter. Marsyas was a satyr who was an excellent player of the aulos, a double-piped reed instrument termed here Minerva’s flute, although not a flute at all. This refers to the myth of Minerva’s ‘invention’ and pioneering of the instrument.

Marsyas and Apollo took part in a contest against one another to determine who was the better player. Judged by the Muses, Apollo inevitably won, his prize being to treat the loser in any way that he wished. Apollo chose to flay Marsyas alive – the most gruesome, painful, and horrific death that he could have devised.

Ovid provides a short but graphic description of the satyr’s body becoming one huge wound, and the tears of all around, particularly the other satyrs and fauns:
And all those falling tears, on fruitful Earth,
descended to her deepest veins, as drip
the moistening dews, — and, gathering as a fount,
turned upward from her secret-winding caves,
to issue, sparkling, in the sun-kissed air,
the clearest river in the land of Phrygia, —
through which it swiftly flows between steep banks
down to the sea: and, therefore, from his name,
‘Tis called “The Marsyas” to this very day.

The subject of mourning leads Ovid back to mention Amphion and his wife Niobe, who was mourned by Pelops. The latter was subject of a well-known myth in which Tantalus, his father, killed him and dismembered the body, then served it up to the gods to test their omniscience. Ceres, still distracted by the rape of Proserpine, ate Pelops’ shoulder.

When the gods reconstituted Pelops and brought him back to life, a piece of ivory was fashioned into a replacement shoulder for him.

That leads on to the last major story in Book 6 of the Metamorphoses.

The story of Marsyas is told in more detail elsewhere, and has been a very popular theme for painting and sculpture. Here I show a very small selection of some of the key paintings which cover different aspects of the myth.

Elihu Vedder had been thinking about the myth of Marsyas, particularly during 1877. Rather than show the contest with Apollo or its grim consequence, Vedder reasoned that Marsyas must have proved his skill with the aulos before the challenge arose. His conclusion was that the satyr might have been charming hares, which led him to paint Young Marsyas or Marsyas Enchanting the Hares (1878).

Vedder shows a young Marsyas in the snows of the New England winter (the artist started work on it in early 1878), surrounded by the enchanted hares. Although a wonderful and original depiction, this painting did not do well when it was exhibited at the Universal Exposition in 1878.

Cornelius van Poelenburgh takes us into the myth itself, showing The Musical Contest between Apollo and Marsyas (1630). Marsyas is to the right of centre, with two other satyrs behind him. Apollo, wearing a crown of laurels both as his attribute and possibly an indication of his victory in the contest, is holding forth from a rocky throne to the right.

At the left are the Muses, the jury for the contest, with another couple of satyrs. There is also a mystery couple, seen walking away in the distance to the left of Marsyas’ right leg, although we can only speculate who they might be.

We are also left wondering whether the contest is just about to take place, or the jury’s verdict has just been announced and Apollo is telling Marsyas of his fate. Given that Apollo appears to be reasoning out loud, I’d like to think that he is here explaining the rules beforehand.

Tiepolo’s Apollo and Marsyas (1720-22) also takes the contest as its theme. It is easy here to mistake the figure sat on the rock throne as being Apollo, but he is actually the youth at the left, bearing his lyre, wearing a wreath of laurel, and given a gentle divine halo.

Thus the figure apparently wearing a gold crown sat in a dominant position must be Marsyas, clutching a flute (of sorts, not really an aulos here) in his right hand. To the right are some of the Muses, one of whom covers her eyes in despair. She knows what Apollo’s pointing arm is about to inflict on the usurper Marsyas.

By far the most famous painting of the flaying itself is one of Titian’s last great works: The Flaying of Marsyas (c 1570-1576).

The satyr has been strung up by his legs from a tree, his arms also bound, and is now having his skin and hide cut off, Apollo kneeling at the left with his blade at Marsyas’ chest. Standing above the god is one of the Muses, playing her string instrument and gazing upwards. Near her left hand are Pan pipes, rather than an aulos, strung from the tree next to the body of the satyr.

At the right, another satyr has brought a pail of water. Others gaze on in dismay at the grisly scene.

Bronzino’s The Flaying of Marsyas (1531-32) summarises the tragedy in its multiplex narrative. At the right, the contest is taking place, with a very human Marsyas playing a wind instrument resembling a clarinet (which is at least a reed instrument like the aulos).

In the left distance, Apollo subdues the defeated Marsyas and binds him. Supervising this is a goddess, who appears to be Minerva, with a shield and spear, who first ‘invented’ and played the aulos. In the centre, Apollo is flaying the satyr, who is here neither bound nor suspended from a tree. The figure in the left foreground may be Olympus, who is expressing his grief.

These are all masterly paintings which tell the story well. My favourite, though, has to be Vedder’s Young Marsyas, for showing us what Ovid didn’t describe.