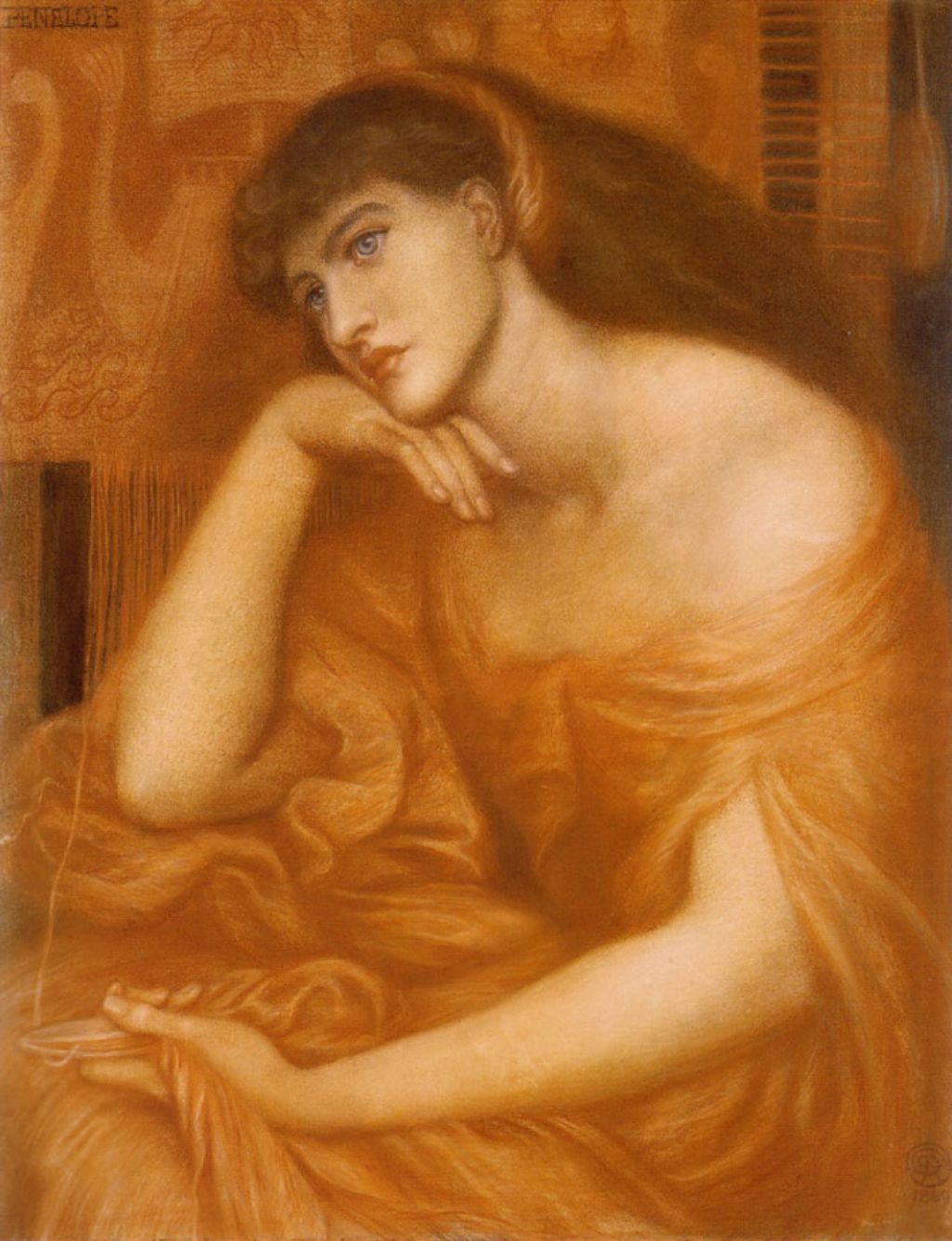 Epics tell the adventures of their heroes as they triumph over the forces of evil. Heroes are almost exclusively male, and their epic is narrated from a strongly male point of view. Of the three greatest epics to emerge from classical Greece and Rome – Homer’s Iliad and Odyssey, and Virgil’s Aeneid – the latter two describe protracted journeys across the ancient Mediterranean.

The Odyssey details the adventures of its hero Odysseus, as he travels back from the ruins of Troy to his wife and family in Ithaca. Although it both opens and closes in Odysseus’ home on Ithaca, the overwhelming majority of its 12,110 lines of verse detail the travels and travails of Odysseus and, to a much lesser extent, his son Telemachus.

When Odysseus left Ithaca for the Trojan War, he left behind a young wife, Penelope, and their young son, Telemachus. It took a further seven hundred years after Homer’s account was probably created, before anyone wrote any serious consideration of Penelope’s story – a pattern which has been repeated for similar stories until the twentieth century. Even then, we learn much about life in the trenches during the First World War, but precious little about what it was like for the women and families left at home.

Robinet Testard’s miniature showing those left at home – Penelope, Laertes and Telemachus (c 1510) – may seem a little quaint to modern eyes, but is a succinct summary. Penelope, as the husband of the now absent King of Ithaca, had to try to rule in his lieu. Odysseus’ aged father, Laertes, was unlikely to see his son’s return. The young Telemachus needed his father to guide him to adulthood, and to learn how to be a king in contemporary society.

Domenico Beccafumi’s almost contemporary painting of Penelope (c 1514) is a sophisticated masterpiece even by today’s standards. By the start of the Odyssey, Penelope’s husband had been away from home for twenty years, during which Penelope had grown from girl to middle-aged maid. For the first of those decades, her husband had faced daily dangers on the killing fields around Troy. News of what had happened was very slow to reach outposts like Ithaca, a small island in the Ionian Sea off the west coast of mainland Greece.

When she heard that Troy had fallen and the victors were returning home, Penelope must have spent days watching and waiting. As she heard reports of other wives regaining their husbands, her hopes must have run like a roller-coaster.

Beccafumi’s Penelope holds a thread in her right hand, which refers to her daily task of weaving the funeral shroud for Laertes, to spinning as a symbol of time and its passage, and to the Fates, who might be the figures shown at the bottom right.

Dante Gabriel Rossetti’s Penelope (1869) is shown at her loom, the shuttle held in her left hand, as she stares lost in thought of her absent husband, whose ships are seen in her weaving.

For Heva Coomans, Penelope Awaiting Odysseus (c 1900) is weaving an image of her husband as warrior, celebrating the victory at Troy. She pauses to look over her shoulder in the hope that the sails of his ships might appear any minute now.

Louis-Jean-François Lagrenée, painting in the late eighteenth century, showed one event which we know didn’t happen: Penelope Reading a Letter from Odysseus.

Instead, her husband’s protracted absence brought suitors for Penelope’s hand, as shown in John William Waterhouse’s Penelope and the Suitors (1912). They took over her court, living off Penelope’s kingdom, raping a dozen of her maids, and rose to more than a hundred in number by the time that Odysseus returned.

Penelope was forced to resort to devious tactics to keep them at bay. The most celebrated was her promise that she could only consider her suitors once she had completed weaving the shroud for Laertes, which they could observe her working on each day.

As Angelica Kauffman shows in Penelope Awoken by Eurykleia (1772), each night Odysseus’ nurse would wake her up, and she would then resort to a subterfuge.

While the suitors were asleep, the queen undid her day’s weaving, as seen in Joseph Wright of Derby’s Penelope Unravelling her Web by Lamp-light (1785). By her son’s bedside, and under the watchful eye of Odysseus’ statue, Penelope ensured that she would remain faithful to her husband alone.

But as time went by, the suitors wondered why the shroud grew in size only very slowly. One of Penelope’s household revealed the subterfuge, and the queen was forced to use other techniques. Telemachus was sent by Athena to discover what had happened to his father.

It is after the return of Telemachus, when Odysseus himself is back on Ithaca, that Ovid’s fictional letter was written by Penelope. Robinet Testard’s miniature, illustrating an early French translation of the Heroides, shows Penelope (c 1510) writing it.

Often assumed to be the ultimate expression of marital fidelity, Ovid’s letter, which opens his Heroides (meaning ‘heroines’), is far more perceptive and insightful. It addresses the restless fear that comes in true love. It recounts, with some curious inaccuracies, some of the events of the Trojan War which must have had greatest impact on Odysseus’ family. It accepts her husband’s inevitable unfaithfulness over those twenty years, during which Penelope has remained steadfast and chaste. It explains how important a father would have been to Telemachus as he grew up.

Ovid’s fiction is the prototype of every letter which could be written by the partner of any man who goes to war (and more).

There has been long debate as to whether, at that time, Penelope already knew that Odysseus had returned. What followed, and is so often skipped over in readings of the Odyssey, is actually its entire purpose, and the climax of the epic.

Penelope set the suitors the challenge of shooting a single arrow from Odysseus’ bow through the heads of a dozen axes: a task which none can attain. This is shown brilliantly in Lovis Corinth’s wall painting Odysseus in the Battle with the Suitors (1913), for the Villa Katzenbogen.

The only person who could string the bow and achieve this task was Odysseus himself. Having confirmed his identity, Odysseus, Telemachus, and two servants, with Athena herself, proceed to slaughter the suitors.

This scene of carnage was the motif for Gustave Moreau’s unfinished The Suitors (c 1852-1885), in which (Pallas) Athena, or Minerva, dominates. In his repeated reworking, Moreau came to obscure the figure of Odysseus, who is seen holding his bow in the doorway at the back, an owl above his head. Moreau would perhaps have done better to have considered the strength and endurance not of Athena, but of Penelope herself.

In 2005, about 2700 years after Homer’s Odyssey became the epic that we know today, Margaret Atwood’s novel The Penelopiad finally told Penelope’s story.