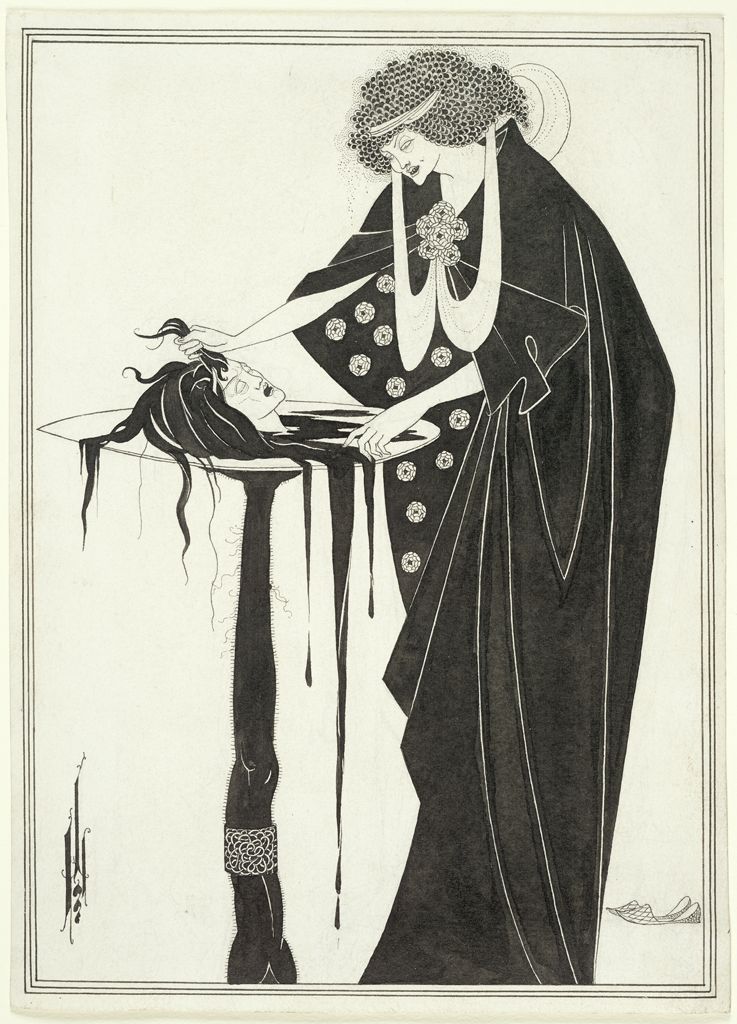 In the last article, I laid out the two main stories concerning Herod, Herodias, Salome, and John the Baptist: that from the Gospels, and that given in Wilde’s play. Each consists of a chain of writing spaces describing individual scenes, linked together using plain links. A reader can now work their way through each text from the start writing space.

To facilitate their comparison, I am going to create a chain of writing spaces which present both stories in composite. To retain context, the reader will be able to consider the two versions of each scene side by side in a single writing space. This is preferable to linking equivalent scenes in the two stories, as switching between the versions will change context.

Storyspace provides several powerful tools for this, a text substitution. The simplest form is to include the text of the two corresponding versions of a scene in a single writing space, using the markup
^include("/notepath")

In this context, I think that this works very well so long as the scenes are short, maybe no more than a few lines. In some scenes from the play, I have included long quotations from the script which would be likely to disrupt the context. These can be worked around using Stretchtext, in which a short anchor text is displayed normally, and is replaced by the full text when the reader clicks on the anchor
^stretch("This is anchor text.","/notepath")
for example.

Before doing this, I need to make an important check, that all my writing spaces have unique names, which they don’t. If two or more writing spaces have the same name, citing that name in an include or Stretchtext will result in Storyspace fetching the text from the first writing space with that name, which is probably not what I expect. Where I have common names, I append a locational qualifier, e.g. John in prison in the Wilde story is renamed John in prison (W).

I also want to make the writing spaces in this composite narrative quite distinct, so I create a new prototype for them, with different coloured tiles and a different badge at the top right of the tile.

To add to the visual contrast, I set the text in the two different stories using different colours: a dark blue for the story from Mark, and red for that from Wilde’s play. This is a good time to check through the text content of each writing space to ensure that it uses the same font, to add any emphasis, and generally prepare each text item for the reader. As I’m going to include the text from the respective TextSource writing spaces to preface each section of included text, I revise those and set them in a smaller, contrasting font, in green.

Setting text colour should be something that I can do in the prototype, but this doesn’t always work perfectly. I would also have needed to make the writing spaces of each story from a different prototype. The best way to do this here is to select the writing space in the Map view, in Edit mode, select all the text, then in the Text inspector change the colour set for the text, and click on the colour patch (to bring up the colour selector), and click on the OK button in that selector.

One other useful trick is to turn off Smart Quotes in the CompositeScene prototype, which will make it much easier for me to enter the straight "" double-quotation marks for include and Stretchtext references. If you leave it on, you will find that single and double quotation marks will be converted automatically to their typographic forms, which do not work with the markup scheme in Storyspace. To do that, select the CompositeScene prototype with the Text Inspector open, and the Text tab selected. At the foot of that view, uncheck the Smart Quotes box. 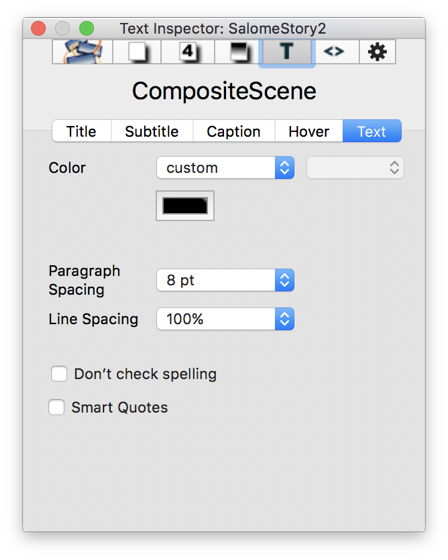 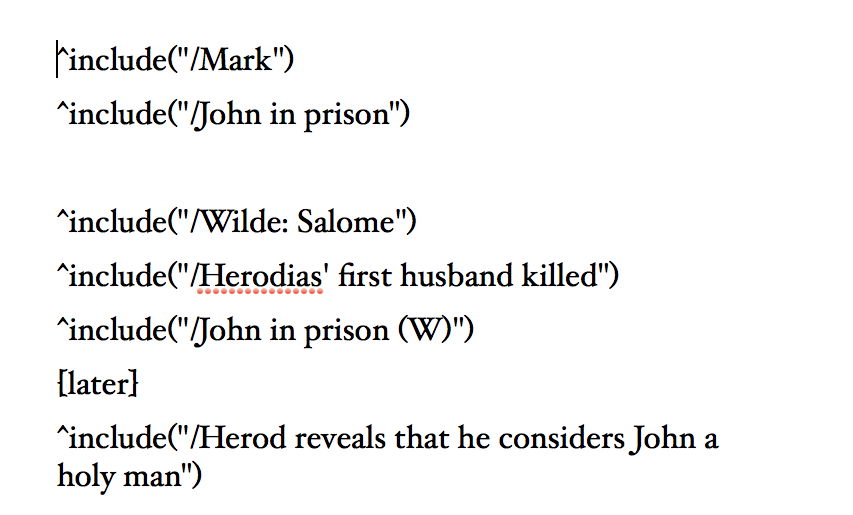 This is a typical composite text seen in Edit mode, showing the ^include markup. Switch to Read mode, and this is what the reader will see. 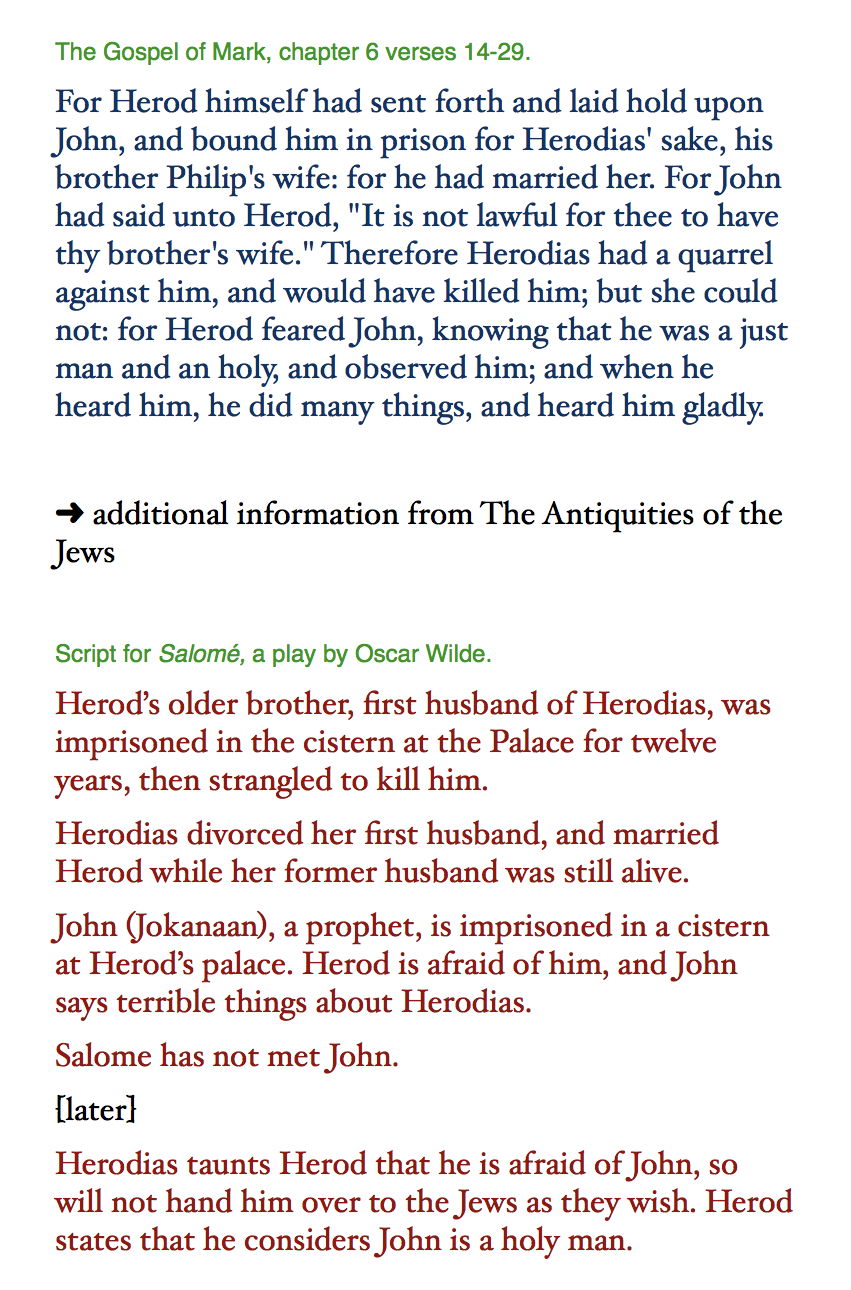 This illustrates some strengths and weaknesses of ^include. The text brought over from the referenced writing space comes complete with its full styling – colour, font, etc. – which here results in a layout which aids text comparison. Many of the scenes have much shorter sections of text to compare, which is even more effective. We can also (as shown here) ^include the contents of writing spaces from later in the story. In this particular case, order of these scenes does not affect the story.

One snag shown here is that the text link to the Josephus limb is also brought over from the Mark story, but is non-functional. At least it does not appear in the blue which signifies a text link.

The next example shows how I deal with writing spaces which contain long quotations. If they are brought over intact, the composite writing space would become much less manageable, and the reader would find it hard to retain context. So for those, I use Stretchtext.

When viewed in Read mode, the ^include sections are brought in in their entirety as before. At first, though, the Stretchtext sections are shown using the anchor text specified, which provides a short summary of the quoted text, and appears in blue. This keeps the composite short and manageable.

Click on the first paragraph of blue text, and it expands to the full text, as if using ^include. 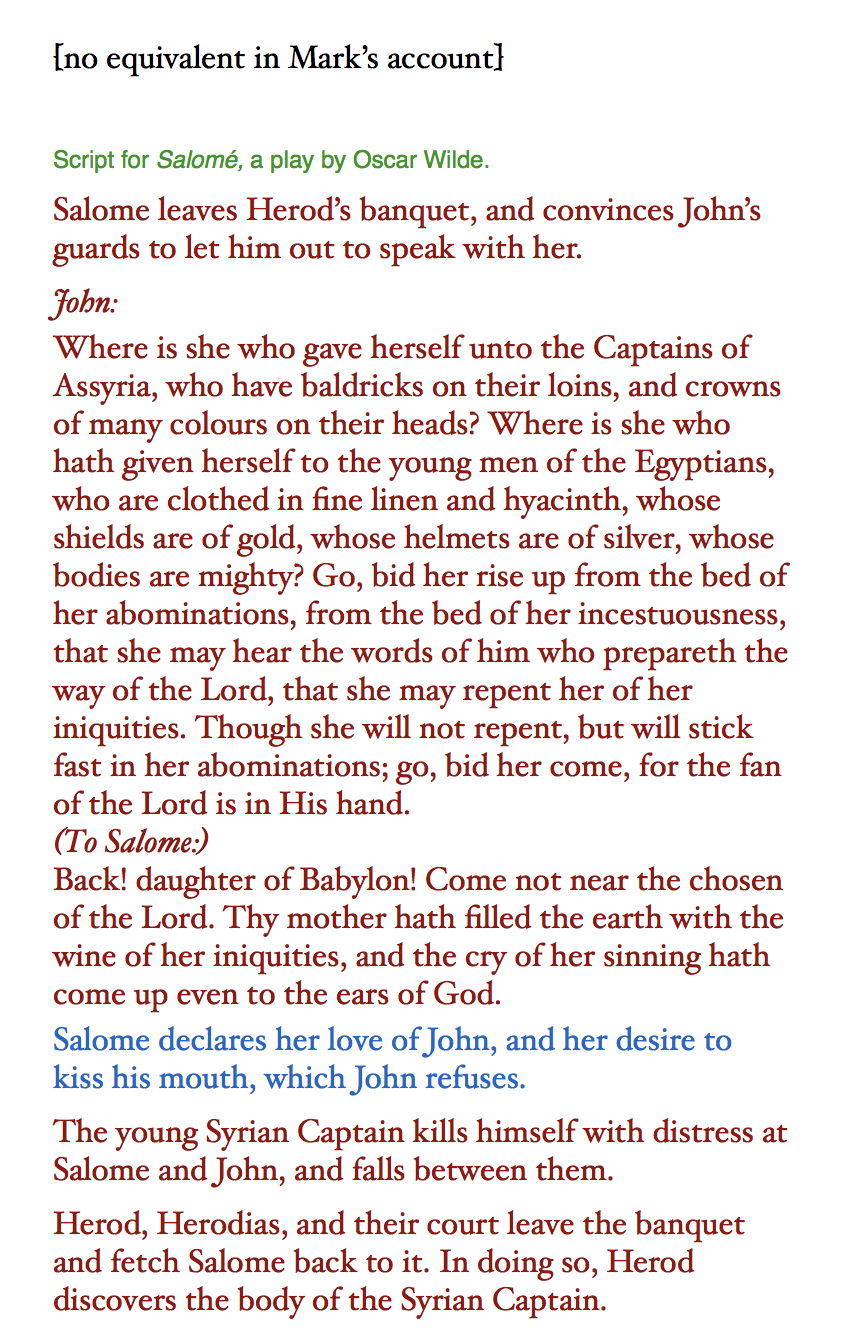 Click on the remaining paragraph of blue text, and the remainder of the text appears, giving the reader full access, but making it harder to manage the comparative context.

I then link up the writing spaces forming the composite story using plain links, and connect that chain to the start writing space so that it is now fully accessible.

Working through the composite story now provides a scene-by-scene comparison of the Biblical account given in the Gospel of Mark, with that of Oscar Wilde’s play Salome. It does so with great efficiency, because the same source text is also used in the single versions of those stories. The reader can now study the two stories and compare them in detail. You can try this out using my Storyspace document here: salomestory2

This provides the narrative basis to which I will next add paintings and other media.