One of the best ways to look carefully at narrative, particular in paintings, is using diagrams, and one of the best tools for diagramming to work with narrative is Storyspace 3 (Tinderbox devotees will no doubt be able to do everything here using that, if they prefer).

If you have not come across Storyspace before, I have a lot of articles which explain its origins and use, conveniently accessed through this index. You can download a free demo version for the Mac which you can use to explore these documents, from Eastgate’s site.

In this article, I am going to show how Storyspace can be used to analyse the narrative elements in two of the paintings of the Rinaldo and Armida story, which I have shown for Poussin here, and for Cades and others here.

To refresh your memory, here is my précis of the narrative:

In this scene (Canto 14, Esolen p 281), Rinaldo has been secretly pursued by Armida, who intends to murder him with her dagger. He stops to rest near the ‘ford of the Orontes’, and takes his helmet off. He first hears Armida swimming in the river, goes to see, and discovers her naked. She sings to him, and lulls him into an enchanted sleep so that she can thrust the dagger home. As she is about to do that, she falls in love with him instead. Rather than killing him, she enchants him and abducts him in her chariot, to a magical island where he becomes infatuated with her, and forgets the crusade.

Although there are much better modern translations, I will use a copyright-free version freely available from OMACL for this analysis, so that I can distribute it with my example files.

My first step is to copy out the relevant sections of the text narrative, into a series of linked writing spaces in Storyspace. Because this is a standard linear narrative, the writing spaces can be linked in a straight chain. I divided the sections up into sub-stories, each of which goes into its own writing space, and I have placed them in Storyspace’s Map view so that Armida’s actions line up down the left, and Rinaldo’s on the right. The final writing space involves Rinaldo’s colleagues, Carlo (Charles) and Ubaldo, and I have therefore put that in the middle.

Here is the Map view of that completed Storyspace document, showing the narrative structure. The link to download all the documents for this article is at the end.

You can read the narrative in sequence by selecting the first writing space Armida’s nature and hunt, then with the view set to Read rather than Edit, press Return to follow the links through the poem.

This is his painting:

Concentrating on the narrative elements within it, I have discussed five key passages: the amorino (cherub-like creature), its restraint on Armida’s right arm, which holds a dagger, whilst her left arm is caressing Rinaldo’s right hand, on his head, and Armida’s facial expression.

There are of course several passages which are key to identifying Rinaldo and Armida, such as his armour and its helmet placed conspicuously at the right of the painting, and the fact that he is shown asleep, having been enchanted by Armida.

In my diagram of the narrative elements, I have added detail views of the relevant passages in the painting, and coded the writing spaces by colour: green indicating the romantic elements, dark red the murderous one, and blue the expressions of conflict. I have also used a flag for the writing space of the amorino to signify that it is a symbolic rather than literal element. These all come together in the conflict which is shown in Armida’s facial expression. 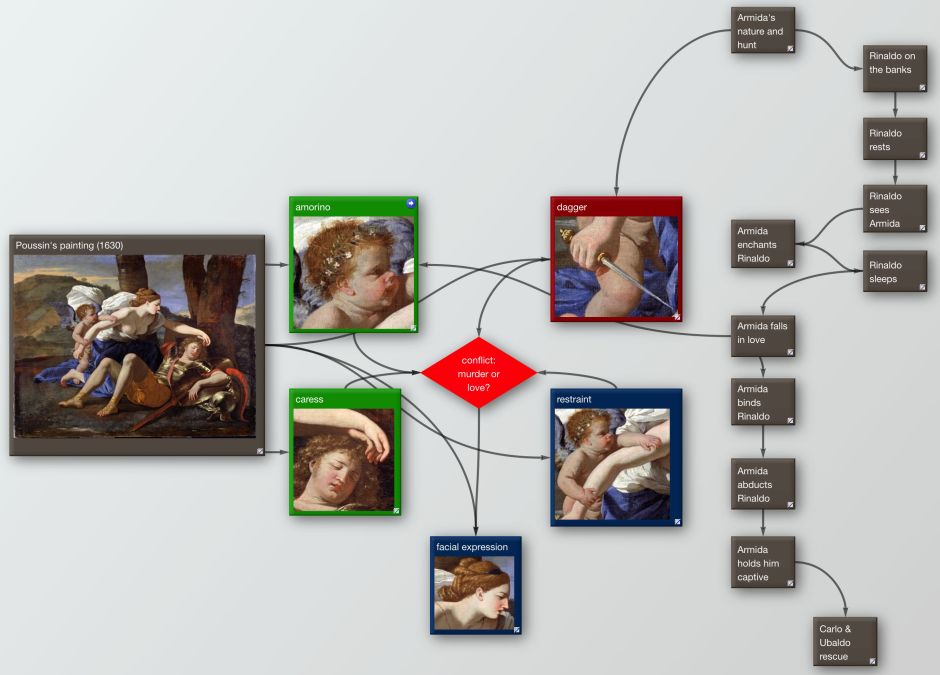 The links shown represent dependencies, thus narrative links, although you can of course traverse them in the usual way.

The overall picture is of a painting which is tightly bound to the narrative text, and its central conflict between the desires for romance and murder. This is a powerful narrative.

One of the points that I made in my previous article is that, as time passed, paintings showing this narrative became more weakly linked to Tasso’s text. I have therefore chosen one of the later paintings by Cades, from 1785, to analyse for comparison. Here is the painting:

Here there are only two clear narrative elements or passages in the painting: the probable amorino, depicted not as the conventional cherub-like creature, but as a young man with angelic wings, and Armida’s facial expression. Other cues, such as Rinaldo’s armour, his helmet, Armida’s dagger, body language, and so on, are absent. Instead there is another woman, possibly a nymph or Armida’s maid, whose role is unclear, as she does not appear in the text narrative. Here is my analysis:

Cades does not use the painting to establish the conflict in Armida’s mind, as Poussin did. This may be a result of the gradual decline from favour of the traditional historia, history painting, or because the artist intended a different narrative which is now obscure. I leave that for you to speculate.

There are many different tools for creating diagrams like these, but none is so well-equipped for analysing narrative as Storyspace (or Tinderbox, if you prefer). Not only that, but you can then develop your analyses into a proper hypertext account of Tasso’s poem, and its expressions in paint.

To help you on your way, here are my three simple Storyspace documents in a single Zip file: rinaldoarmida