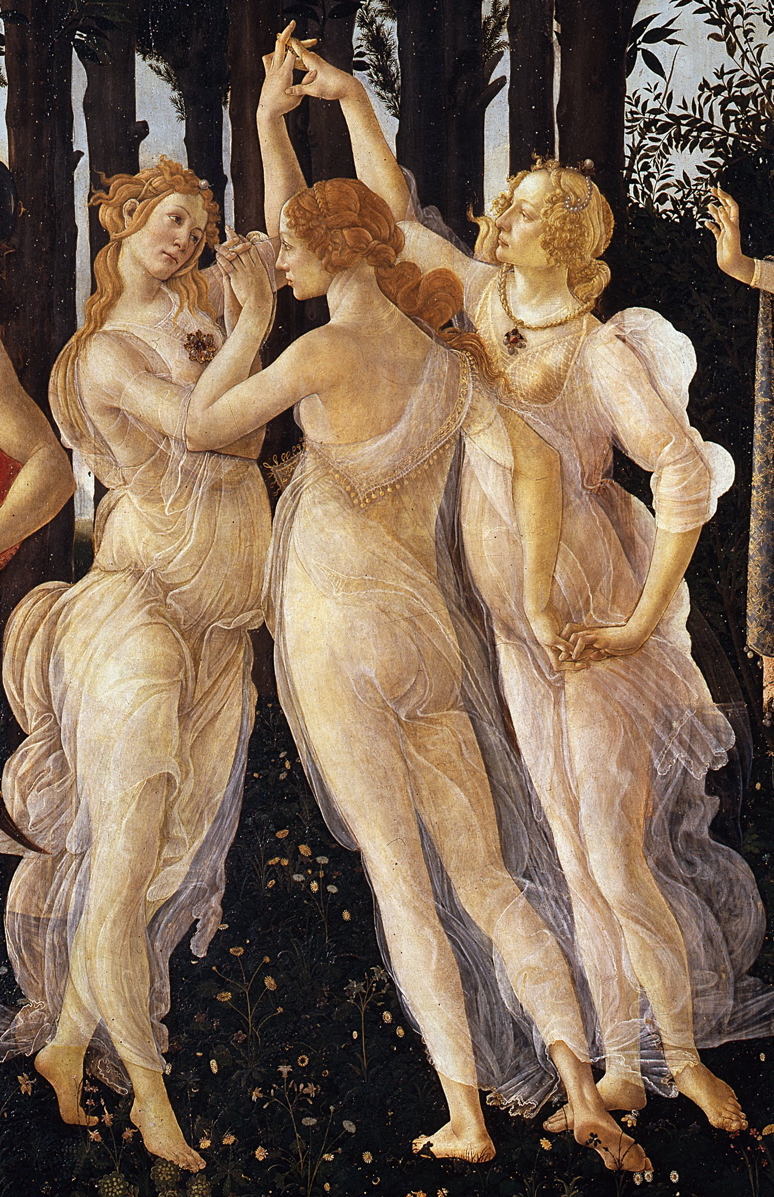 One of the most famous paintings of the Italian Renaissance, and one of the later huge works in egg tempera, its interpretation remains controversial.

The Painting in Outline

Nine figures at the edge of a small but dense grove of orange trees. The ground beneath them is rich with a huge variety of different plants, as indicated by the flowers interspersed throughout.

From the right, these figures are identified as:

Alessandro di Mariano di Vanni Filipepi, known generally now by the name of Sandro Botticelli, was born in the city of Florence in about 1445. He became an apprentice, possibly first as a goldsmith, and at some time is thought to have worked in Fra Filippo Lippi’s workshop. During that period he was involved in the creation of a fresco in Hungary, but little else is known until he had established his own workshop in Florence by 1470.

In 1481 he was among the artists summoned to paint the walls of the Sistine Chapel. He also produced illustrations for the first printed edition of Dante’s Inferno in 1481. The Primavera was commissioned by his patron Lorenzo di Pierfrancesco de’Medici, for his Florence residence, but was later moved to his residence at Castello, where it was joined by The Birth of Venus. Botticelli was involved with considerable work for churches and villas, but later came under the influence of Savonarola, and his output fell. He died on 17 May 1510.

Following his death his work fell out of favour until it was rediscovered by William Young Ottley, a British collector, in 1799. He became particularly popular in the early part of the twentieth century.

As this is a narrative painting depicting mythological figures, each a deity from the Roman pantheon, we need to reconstruct their identities and the underlying narrative. There are many different theories which attempt to explain the meaning of this painting, but before considering that it is essential to discover who is doing what, at least on the surface.

The rightmost figure is Zephyrus, the west wind, famed for bringing warm, moist air to the Mediterranean in spring, thus bringing the first crops on after the winter.

He is holding Chloris, who is seen almost superimposed on Flora. This is a direct reference to what is probably the central literary source for this painting, lines 194 to 220 of Book 5 of Ovid’s Fasti, covering the day of 3 May. Fasti is a calendar of feasts and gods, detailed in Latin verse, which may have been transmitted to Botticelli through the contemporary Ovidian poet Poliziano (Angelo Ambrogini, 1454-1494), who also enjoyed the patronage of the Medicis. Ovid’s lines explain how Zephyrus raped and then made a bride of the nymph Chloris, who then metamorphosed into Flora:

(While she spoke, her lips breathed out vernal roses):
‘I, called Flora now, was Chloris: the first letter in Greek
Of my name, became corrupted in the Latin language.
I was Chloris, a nymph of those happy fields,
Where, as you’ve heard, fortunate men once lived.
It would be difficult to speak of my form, with modesty,
But it brought my mother a god as son-in-law.
It was spring, I wandered: Zephyrus saw me: I left.
He followed me: I fled: he was the stronger,
And Boreas had given his brother authority for rape
By daring to steal a prize from Erechtheus’ house.
Yet he made amends for his violence, by granting me
The name of bride, and I’ve nothing to complain of in bed.
I enjoy perpetual spring: the season’s always bright,
The trees have leaves: the ground is always green.
I’ve a fruitful garden in the fields that were my dower,
Fanned by the breeze, and watered by a flowing spring.
My husband stocked it with flowers, richly,
And said: “Goddess, be mistress of the flowers.”
I often wished to tally the colours set there,
But I couldn’t, there were too many to count.
As soon as the frosted dew is shaken from the leaves,
And the varied foliage warmed by the sun’s rays,
The Hours gather dressed in colourful clothes,
And collect my gifts in slender baskets.
The Graces, straight away, draw near, and twine
Wreaths and garlands to bind their heavenly hair.

Translated by A. S. Kline 2004 All Rights Reserved, from here. The Latin text is given in the Annex below.

(It should also be noted that the claim, that it was the Romans’ inability to pronounce the Greek name Chloris which was the origin of her subsequent name Flora, is spurious. Chloris originates from the Greek for the colour green, appropriate for a nymph associated with plants and vegetation. Flora originates from the Latin word for flower.)

To the left of Flora are the three Graces, or Charites, said to be the daughters of Zeus and Eurynome, or Dionysus and Venus: Aglaea (representing splendor), Euphrosyne (mirth), and Thalia (good cheer). By Homer’s time, they had become part of the retinue of Venus. Two bear distinctive pendants at their breast, which could enable them to be distinguished, but I have not found anyone prepared to go into such detail. Although one is shown here as taking a fancy to Mercury, and possibly about to be the recipient of one of Cupid’s arrows burning with desire, I cannot find any reference to a relationship between Mercury and one of the Graces.

Venus is the mother of Cupid, and (often) of the Graces. Her central place here may put her in the role of oversight, and Botticelli had a predilection for portraying Venus, in his famous works The Birth of Venus, showing her maritime origins, and her relationship with Mars in Venus and Mars. Her pregnancy associates her with fertility and fecundity, a key theme in the Spring.

It is also tempting to invoke aspects of the Virgin Mary in this depiction of Venus; although also associated with carnal love, there was a Platonic side to Venus, perhaps marked here by her unusually complete state of dress. However other clues suggesting symbolism with the Virgin Mary such as her characteristic blue mantle or dress are absent.

Cupid is the personification of love; although also capable of stopping desire, his burning arrows resulted in burning desire to inflame the heart. He is one of the most popular of the Roman deities to be shown in paintings, and his influence is also seen in the cherubic putti which often adorn more Christian works of art.

Mercury is the son of Maia (who gave her name to the month of May, hence his association with Spring) and Jupiter. He is the Messenger of the Gods, and is marked by his staff or caduceus, which is normally depicted with entwined serpents along its length; Botticelli has chosen to give them wings to resemble dragons instead. He is also more typically seen with his caduceus in his left hand, rather than his right as shown here. Mercury’s special boots, often shown with wings attached, as also seen.

Despite these rich and very detailed allusions to pre-Christian pagan religion, it is generally agreed that this painting, Botticelli, and the Medicis were Christian, and had no leanings towards old religions. Instead these Classical symbols were interpreted in Christian or Neo-Platonic terms, for example with love being platonic rather than carnal.

This huge painting is a superb technical achievement, being painted in around four layers of tempera grassa, or egg tempera mixed with drying oil. Whilst painters of the Northern Renaissance had been using oil paints throughout the fifteenth century, those in the Italian Renaissance were considerably slower to switch from old egg tempera to new oils.

Egg-oil tempera was a highly successful intermediate step, which some experts even today consider to be longer-lasting than good oil paints. However, because this tempera was still very much quicker to dry than proper oil paints, it limited the techniques open to Botticelli and his contemporaries using it. This in turn made it harder for them to depict the surface light and texture effects which those in the North had revelled in since van Eyck and his contemporaries.

Nevertheless Primavera is an extraordinarily beautiful and fascinating painting, with a rich and perhaps still enigmatic narrative. It is one of the great paintings of the Renaissance, and of all Western art.

Botticelli and this painting in particular are well covered in all books about the Italian Renaissance. There are also several books which expound more radical interpretations. More specialist references include:

Baldini U (1986) Primavera. The Restoration of Botticelli’s Masterpiece Harry N Abrams. ISBN 0 8109 2314 9. (A slim book with many details of the painting, and many excellent photos of parts of it, as well as first-hand account of the last conservation programme.)
Gibson C (2007) The Hidden Life of Renaissance Art, Secrets and Symbols in Great Masterpieces, Saraband. ISBN 978 1 887354 59 2. (Excellent decoding of the gods and other symbolic content, with good illustrations, and large format.)
Barolsky P (2014) Ovid and the Metamorphoses of Modern Art from Botticelli to Picasso, Yale UP. ISBN 978 0 300 19669 6. (Although Primavera is covered in just a few pages, this is a fascinating and accessible text with sound scholarship, and an excellent read.)
Frazier JG trans (1996) Ovid. Fasti, Loeb Classical Library, Harvard UP. ISBN 978 0 674 99279 5. (The only readily available text and translation of the Fasti.) Note that an older edition is available free from here.

Copyright Notice in Respect of this Latin Quotation

This eBook is for the use of anyone anywhere in the United States and
most other parts of the world at no cost and with almost no
restrictions whatsoever. You may copy it, give it away or re-use it
under the terms of the Project Gutenberg License included with this
eBook or online at www.gutenberg.org. If you are not located in the
United States, you’ll have to check the laws of the country where you
are located before using this ebook.