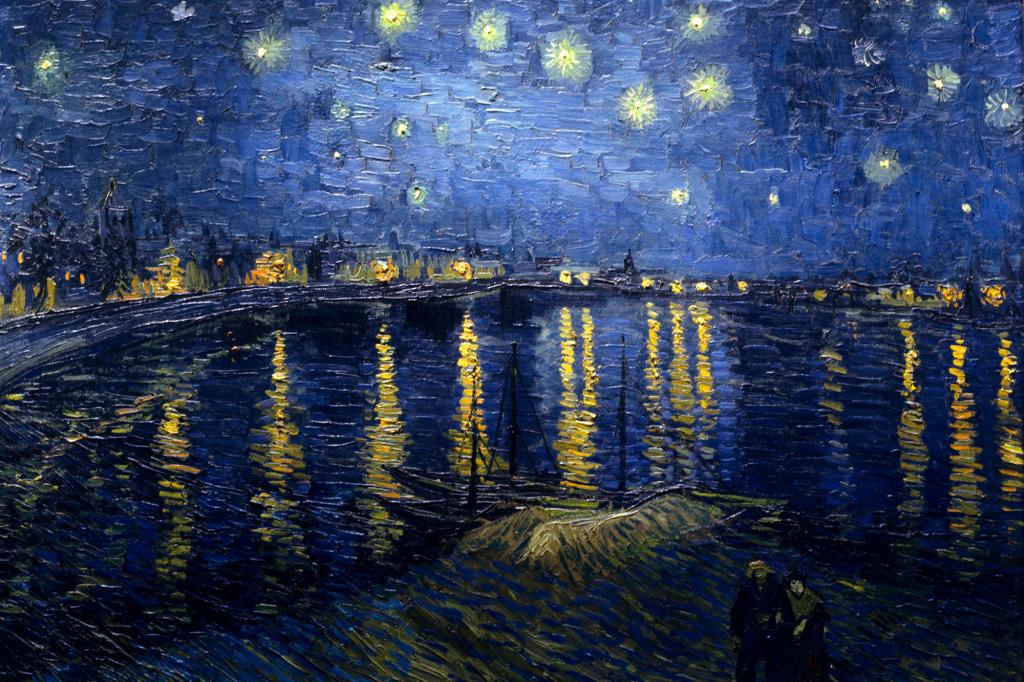 As the Masters in the South got to grips with linear perspective, those of the Northern Renaissance explored the new medium of oil paints and their power in representing surface textures and the effects of light. This remarkable work is a landmark in the development of Western painting, and an early triumph of realism, which opened the way for landscape as a new genre.

This watercolour landscape would not look out of place alongside the works of Turner and other masters 300 years later. It is one of many pioneering works by the versatile genius of the Northern Renaissance, Albrecht Dürer, whose innovations in prints, watercolour, and broadening of painting genres made him uniquely important, and this remarkable painting a signpost to the future.

In his later years, Poussin turned more to landscape painting. This is one of his most sublime and pure landscapes, idealised rather than representing any view of the real world, and one of the greatest landscape paintings.

Two modest and simple landscapes, some of the first painted outdoors or plein air using oil paints, with a freshness not seen in formal studio work, which paved the way for Constable, Turner, and the Impressionists.

Two late paintings portraying tranquil sunlit scenes of dawn over still water, remarkable in their anticipation of Impressionism. Turner’s virtuoso displays of painterly skills used watercolour and oils, making him one of the first painters to push the boundaries in both media, and to accord both with the dedication that they deserve. Comparison of these two works shows that Turner made no distinction between the worth of the media, and was able to create similar effects irrespective of medium. Indeed his art had transcended its media.

A simply golden landscape at sunset, by the central figure in Impressionism and father of Post-Impressionism. Through his relationships with Cézanne, Gauguin, and Signac, his influence over Vincent van Gogh, and late friendship with Matisse and other young artists, Pissarro was not only the hub of Impressionism, but of singular importance to post-Impressionist art, and that of the twentieth century.

This Impressionist essay on light, colour, and tranquillity features vivacious brush work. Together with Mary Cassatt, Berthe Morisot developed what was in effect a new genre of painting, depicting the intimate moments of everyday family life, particularly activities involving mothers and their helpers, and children. This emphasis on domestic scenes was an important part of the Impressionist agenda to paint the world as it is, and broadened the appeal of their paintings. They were among the first painters to offer art truly for all.

This serene and startingly colourful nocturne took painting from the heights of Impressionism towards several radical movements of the twentieth century. Vincent van Gogh’s late works were of profound influence to many painters, and he achieved more in those frantically productive three years than other great painters do in their entire working lives.

A luminous painting of the port of Marseille in dawn light, looking up towards the ‘Good Mother’ church, marks the height of both Neo-Impressionism and Fauvism. When Signac and successors first arrived on the Mediterranean coast, it was relatively unspoilt and many of today’s densely populated and popular resorts were still small fishing villages. As a technique, Divisionism (pointillism) had proved a dead end, but the vibrant studies of light and colour produced by Signac and others form a unique record of the Midi at that time, and had a lasting impact on painting.

This startlingly realistic depiction of idle moments by the side of an alpine stream is composed of bravura brush strokes, dabs and daubs of bright colour. But it is a carefully contrived illusion, in every respect. Although very popular with patrons, critics, and the public at the time, and successful at the Salon and Royal Academy, proponents of Cubism and more modern art during the middle of the twentieth century took a dim view of Sargent’s work. This has fortunately changed over the last few decades, when he became a (realist) painter’s painter. This work is typical of Sargent at his very best, with its distinctive passages of water and white fabrics, rich light and colour.

Sadly, all those painters who I wanted to feature after Sargent – including Pierre Bonnard, Marc Chagall, and others more recent – are still covered by copyright, and it would therefore not be legal to show images of their work. In any case it is perhaps better to leave the future to establish whether their work is in the same league as those above. I will be adding more articles to this series, covering others who are no longer subject to copyright restrictions, in coming weeks. If you have suggestions for painters or paintings which you would like to see included, please let me know.