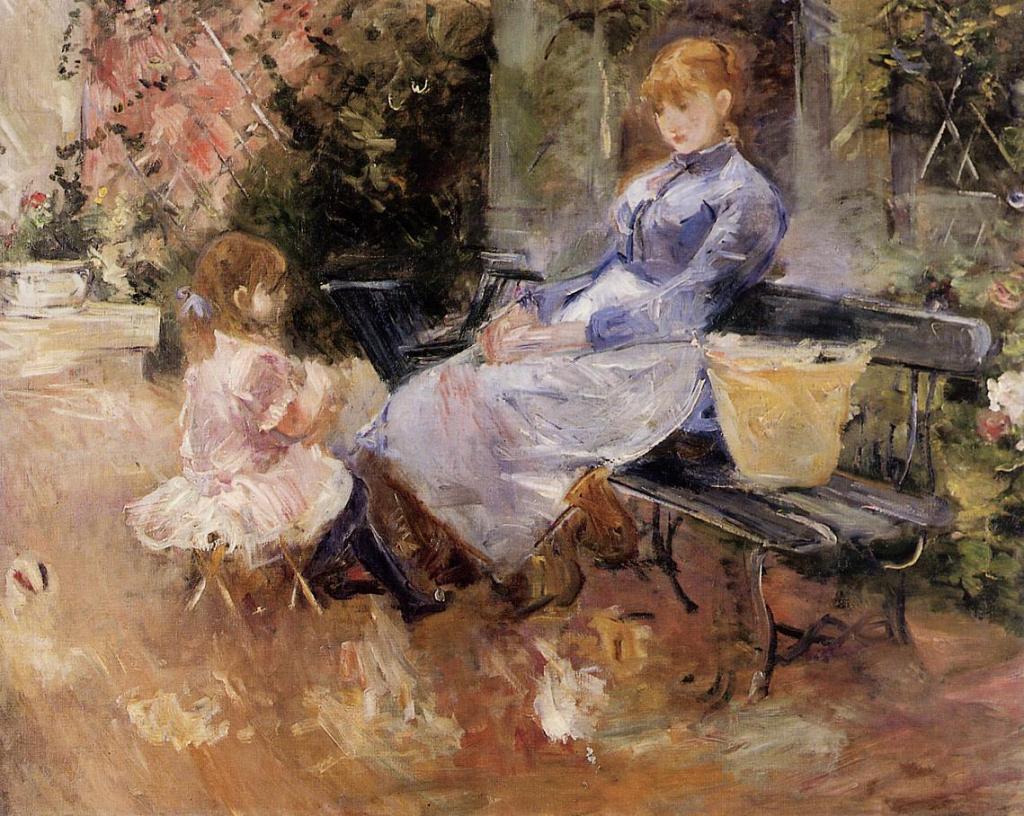 This Impressionist essay on light, colour, and tranquillity features vivacious brush work; in taking art into everyday family life, it heralds art for all.

A young woman sits reading in a conservatory. She is just to the right of the centre foreground, with her lap at the lower edge. Her head is slightly bowed as she looks intently at the book she holds in both hands, just above her lap. She wears a dress of green, brown and pale colours, with a high neck, its sleeves ending half way down her forearms. At the centre of its broad collar, possibly a green shoulder throw, on the upper part of her chest, is a white flower. Her hair is fair, tied back with a red bow securing a single plait which passes behind the ochre wicker back of the chair on which she sits. A small bag hangs over the corner of the chair.

Cropped at the left edge is a large birdcage with golden bars. Behind her are the low wall and large windows of the conservatory, the vertical of a window frame passing upwards to the top of the painting from the right edge of the chair back. Outside there are rich green palms above low trellis, with further foliage and blue flowers behind them.

The painting is light, colourful, and tranquil. Abundant brush strokes are visible, forming the folds in the woman’s clothes, the palm fronds, and giving a sketchy, spontaneous feel to the work. Although many of her paintings feature her daughter Julie, the model in this case was Jeanne Bonnet.

Berthe Morisot was born on 14 January 1841 into an affluent family; her mother was related to Fragonard, and ensured that Berthe and her two sisters received an art education. She was introduced to the Louvre Gallery in 1857, and the following year started copying paintings there, where she made friends with Corot and other artists. Corot encouraged her to work plein air, and she studied under Oudinot, another of the Barbizon School. Two landscapes of hers were accepted for the Salon of 1864, following which she exhibited quite regularly there. In 1868 she modelled for and became friends with Édouard Manet, introducing him to plein air painting and influencing his style and composition.

In 1872, the dealer Durand-Ruel, who sold most Impressionist works and was a key figure in the success of the movement, bought paintings from her, and she started to receive critical acclaim. She married Édouard Manet’s brother Eugène in 1874, having a daughter in 1878, but continued to paint under her own name. Also in 1874 she showed 12 paintings in the First Impressionist Exhibition. She was a particularly active member of the Impressionist group, helping to organise and taking part in all but one of their Exhibitions.

Her style and brush strokes loosened noticeably during the 1870s, and she painted during family holidays to the Isle of Wight (1875), Jersey (1886), and within France. Although she mainly painted landscapes in her early years, she was an accomplished portraitist, and developed a new genre depicting intimate moments in everyday family life, in which her daughter was often included. However her health had suffered during the Franco-Prussian War and Commune of 1870-1, and she appeared to age prematurely. She died on 2 March 1895 (almost exactly 120 years ago).

Her works sold quite well during her lifetime, and in 2013 she became the highest priced female artist, when a portrait of hers sold for nearly $11 million.

Berthe Morisot was by no means the first great woman painter. Among the most famous of her precursors were:

Neither was she the only accomplished woman among the Impressionists. Mary Cassatt, an American, was equally prolific and influential until cataracts prevented her from working. Marie Bracquemond is much less known today, partly as a result of her husband’s dislike of Impressionism, but her works are worth finding. However Morisot stood at the heart of the group of Impressionists – and on her own merit, not through her marriage.

Painting had a strangely ambivalent place in the lives of affluent women of her age. Considered a social grace which was an important part of the education of young ladies, with role models such as Queen Victoria (who painted many watercolours), becoming a professional painter was quite unusual and radical. The women Impressionists helped change society’s attitudes, and themselves became role models for more women from the end of the nineteenth century, long before many women in Europe were even able to vote.

Morisot was much more than just one of the women in Impressionism. Together with Mary Cassatt, she developed what was in effect a new genre of painting, depicting the intimate moments of everyday family life, particularly activities involving mothers and their helpers, and children.

In doing so, her remarkable brushwork took the marks first seen in the late works of Rembrandt, and others, to form the soft folds of fabrics, in particular. This give her paintings a softness which is more appropriate to their materials and motifs, and led the way for others such as John Singer Sargent. This particular work is a fine example of the Impressionist approach to light and colour, and could sit comfortably alongside many of the best portraits of the late twentieth century, for example.

Her emphasis on domestic scenes was an important part of the Impressionist agenda to paint the world as it is, and broadened the appeal of their paintings. Whilst Renoir continued to paint nude women to satisfy the desires of traditionally affluent male viewers, the appeal of Morisot and Cassatt reached out to women and families, and continues to do so today. They were among the first painters to offer art truly for all.

Musée Marmottan Monet, Paris, one of the largest collections of her work
WikiArt
Wikipedia
National Museum of Women in the Arts, Washington DC