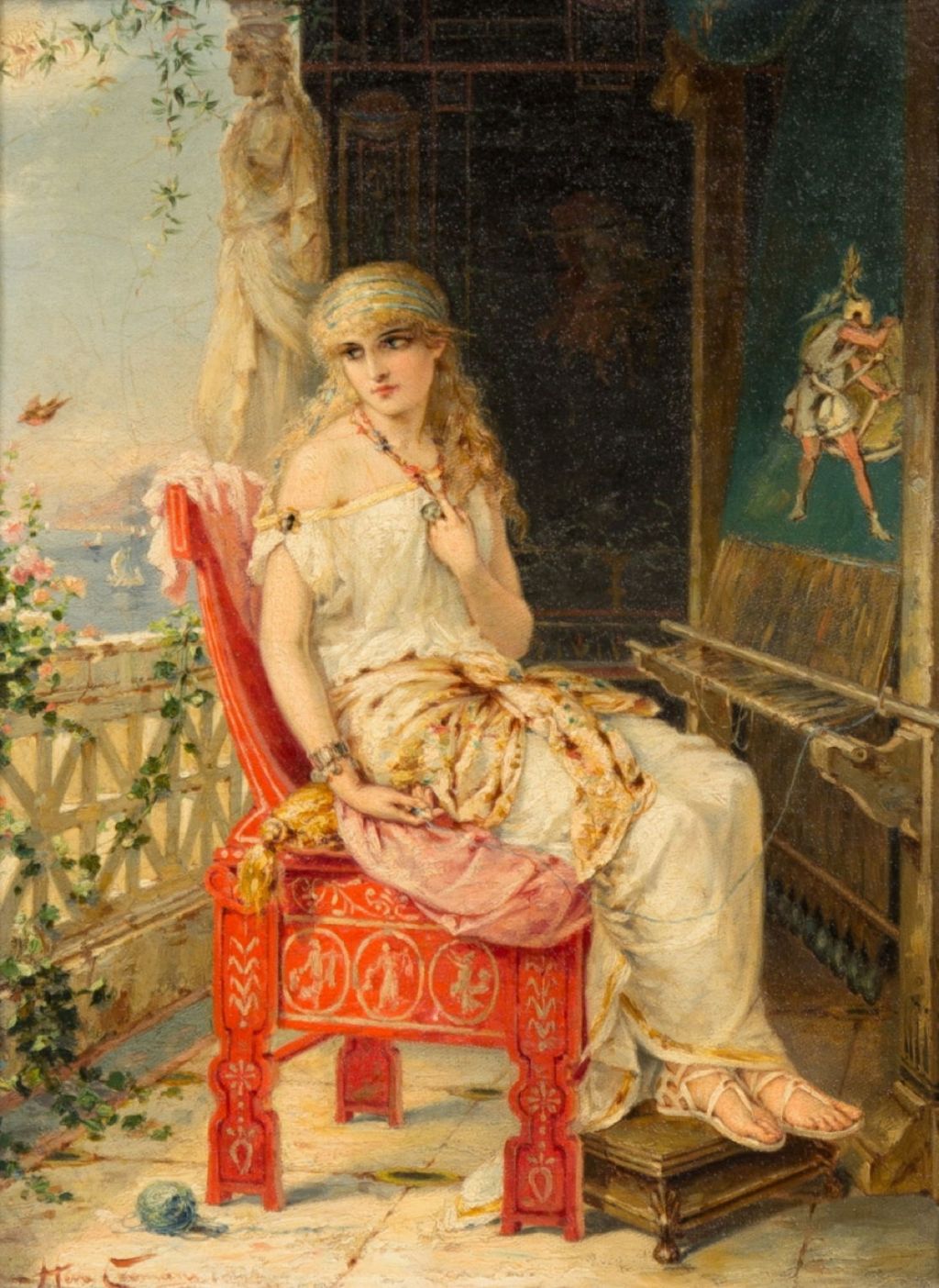 With the wool or other natural fibres spun into yarn in the first of these two articles, we move on to building that yarn into fabric, to assemble into clothing. As with spinning, there are several ancient associations with the craft of weaving.

Elizabeth Nourse’s portrait of a Tennessee Woman from about 1885 shows her weaving at a large loom, with her cat for company.

Paul Sérusier’s later paintings returned to styles more akin to those of the late Middle Ages. Tapestry (Five Weavers) from 1924 shows five women working on various stages of a tapestry, from winding the wool to hand-weaving. As none of the figures is holding the all-important shears or scissors, there’s no allusion to the Fates here.

John William Waterhouse’s “I am Half Sick of Shadows” said the Lady of Shalott (1915) is the third and last of his paintings based on the poem The Lady of Shalott by Alfred Lord Tennyson (1809–1892), published in 1833 and 1842. This recounts part of the Arthurian legends, the tragedy of Elaine of Astolat, as retold in an Italian novella from the 1200s from which it gets its title.

The Lady of Shalott lives in a castle connected to Camelot by a river. She’s subject to a mysterious curse which confines her to weaving images on her loom, and mustn’t look directly at the outside world, although she can view it using a mirror. Tennyson calls these reflected images ‘shadows of the world’, and this painting depicts the stanza from the poem:

But in her web she still delights
To weave the mirror’s magic sights,
For often thro’ the silent nights
A funeral, with plumes and lights,
And music, went to Camelot:
Or when the moon was overhead,
Came two young lovers lately wed;
‘I am half sick of shadows,’ said
The Lady of Shalott.

William Holman Hunt and Edward Robert Hughes had jointly painted their version of The Lady of Shalott a decade earlier. This wraps her up in numerous coloured threads from her weaving, perhaps cross-referencing Arachne and her spider’s webs (see below).

Behind Frederick Sandys’ Morgan-le-Fay (1863-64), from another Arthurian legend, is a large weaving loom, although its reference here is more obscure.

The first print in William Hogarth’s narrative series Industry and Idleness (1747) shows his two apprentices together at their work, their Master at the far right. Goodchild, to the right of centre, is labouring away at a hand loom, which hasn’t yet incorporated the fly shuttle invented by Kay in 1733. By his feet is an open book, with the title The Prentice’s Guide.

Idle is at the left, his eyes closed in sleep. His loom is locked off, and his clay pipe wedged into its handle. A cat plays with the idle shuttle, and a beer mug is balanced on its frame. His copy of The Prentice’s Guide is torn and tattered, and above his head is a ballad sheet titled Moll Flanders. Symbolic items decorate the frame: a mace of high office (for Goodchild), and the hangman’s noose (Idle).

In the many years that her husband was away, Penelope, wife of Odysseus/Ulysses, told potential suitors that she couldn’t remarry until she had completed weaving a shroud for Odysseus’ father. Although they saw her weaving intently by day, she then unravelled her work each night when her suitors were asleep.

Dante Gabriel Rossetti’s Penelope (1869) is shown at her loom, the shuttle held in her left hand, as she stares lost in thought of her absent husband, whose ships are seen in her weaving.

For Heva Coomans, Penelope Awaiting Odysseus (c 1900) is weaving an image of her husband as warrior, celebrating the victory at Troy. She pauses to look over her shoulder in the hope that the sails of his ships might appear any minute now.

The most popular myth centred on weaving that has been depicted in visual art, is that of the contest between Arachne and Minerva (Athena), which culminated in the mortal Arachne being turned into a spider.

Several of the surviving paintings of this myth show Arachne and Minerva at their looms, weaving like fury. Francesco del Cossa’s The Triumph of Minerva (1467-70) was chosen for the month of March in his fresco for the Room of the Months in the Palazzo Schifanoia in Ferrara, Italy.

The trio of women in the foreground are engaged in allied crafts, including embroidery and sewing. Behind them are the two weavers working at what is shown as a single loom, the traditional boxwood shuttle just being inserted by the left hand of the woman at the right. They’re surrounded by a large group of women spectators.

Tintoretto’s brilliant Athena and Arachne (1543-44) is now thought to have been painted by his workshop. It shows the two from an innovative angle, which gives excellent (and fiendishly hard to project) views of both figures, including their faces. Minerva at the left wears her traditional plumed helmet, here made to look more like a woman’s hat than a warrior’s helmet. She also holds a sickle in her right hand. Arachne is at the right with her robes tightened below the breasts, which are exposed, as described by Ovid in his Metamorphoses. Spectators are shown behind the loom, watching the contest in progress.

Rubens’ surviving oil study of Pallas and Arachne (1636-7) advances the story in a more conventional view. In the foreground, the angry Minerva is striking Arachne on the forehead with the shuttle. To the right is one of the images woven by Arachne, showing Europa riding Jupiter disguised as a white bull, an image with which Rubens was familiar from Titian’s Rape of Europa (c 1560-62), copied by Rubens in 1628-29. However, that shown here is quite different from either the original or its copy.

Behind Minerva and Arachne, two women are sat at a loom, and it is tempting to think that they too might represent the pair in multiplex narrative. However, neither is dressed in red as is Arachne, leaving that question open.

Almost at the turn of the century, Edward Burne-Jones told the more obscure and harrowing story of Philomela (1896) in this ingenious wood engraving to illustrate The Legend of Goode Wimmen in the famous illustrated edition of the works of Chaucer published by the Kelmscott Press that year. Philomela was raped by her brother-in-law the king of Thrace. When she refused to keep silent, he cut her tongue out and abandoned her in a remote hut. She is shown here weaving her story, carefully labelled, as her only means of telling it to others.