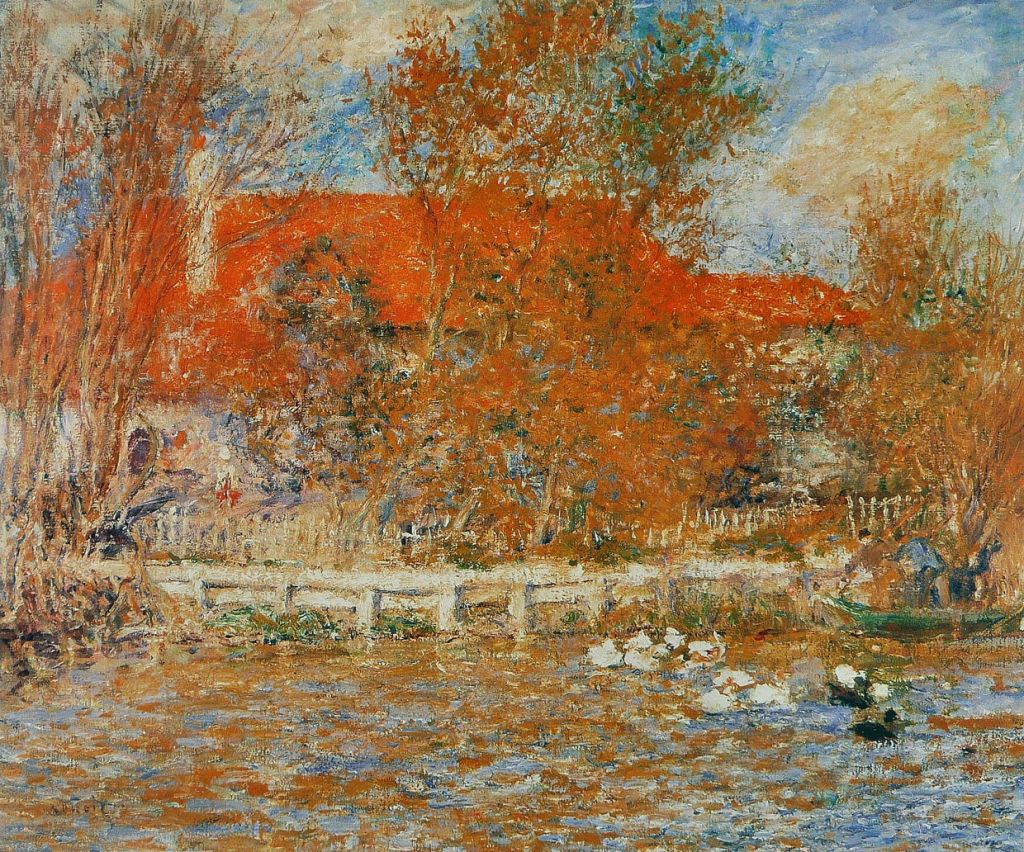 There’s a modern tendency to think of Pierre-Auguste Renoir (1841–1919) as not being one of the true French Impressionists, as if he somehow abandoned the movement and went off to paint only portraits and buxom nudes. As the core Impressionist with the greatest figurative skills, his work embraces more genres, but it’s all too often forgotten how central he was to the development of Impressionist landscape painting.

Renoir was born in Limoges, just to the west of the middle of France, on 25 February 1841. His father was a tailor, and the family soon moved, when Auguste was but a toddler, to seek their fortune in Paris. As a child, he showed an early aptitude for drawing and singing, and was taught music by the composer Charles Gounod.

The Renoirs’ relocation didn’t bring the expected change in fortune, so once he was thirteen, young Auguste started his apprenticeship at a porcelain factory. There, his painting abilities were recognised, and he started to prepare for candidacy for the École des Beaux-Arts. This was cut short when the factory switched from hand-painting to mechanical processes. For a while, he undertook decorative painting of fans and wall-hangings.

One of his earliest surviving paintings, his Portrait of the Artist’s Mother from 1860 declares his intent in figurative painting. His mother Marguerite was a seamstress aged 53 at the time, and the artist already demonstrates his skill in modelling her worn features.

In 1860, Renoir started to copy paintings in the Louvre, standard practice for those aspiring to paint. The following year, he started at Charles Gleyre’s academy, where he later met future Impressionists, including Claude Monet, Alfred Sisley, and Frédéric Bazille. They remained close until Bazille was killed in the Franco-Prussian War.

Renoir gained admission to the École des Beaux-Arts in April 1862, and two years later had his first painting accepted for the Salon, although it wasn’t until 1868 that he achieved any recognition there. He also made friends with the architect-turned-artist Jules Le Coeur (1832-1882), who welcomed Renoir to his family property near Fontainebleau and its forest, where they went to paint.

Clearing in the Woods (1865) is Renoir’s first substantial (surviving) landscape painting, and shows strong influence from Corot. He adopts a detailed realist style in this view of a clearing in the midst of massive chestnut trees. These are believed to be near the small village of La Celle-St-Cloud, to the west of Paris not far from Bougival. It’s likely that he painted there in the company of Alfred Sisley, who made two views of the same site.

Renoir painted The Pont des Arts Paris in April 1867. Its detailed realist view shows this pedestrian bridge from the left bank of the Seine.

The winter of 1867-68 was so bitterly cold that the River Seine in Paris was frozen over for eleven days in succession. Renoir and Bazille moved their shared studio to the Batignolles district to the west of Montmartre at the end of 1867. Renoir had work in the Spring: a commission for ceiling decorations in the Paris home of Prince Georges Bibesco, for which he started painting watercolour studies. He also had a full-length portrait of his partner Lise Tréhot accepted for the Salon.

Several of the Impressionists became fascinated by circus acts: Degas, for instance, by Miss Lala at the Fernando Circus (1879). Renoir’s interest preceded that by a decade, with this portrait of The Clown (1868) poised in the ring.

In the summer of 1869, Renoir lived at his parents’ house in Louveciennes, where the Pissarros were renting a house. He visited the Monets, who were living near Bougival, and often painted alongside Claude Monet. Some of the formative moments in Impressionism if not European art occurred when Monet and Renoir visited the popular bathing houses on the Seine known as La Grenouillère, most famously seen in Monet’s painting in the National Gallery in London.

Renoir painted at least three different views of La Grenouillère that summer. The version above, most similar to Monet’s, is in the Oskar Reinhart Collection in Switzerland. Originally conceived as plein air sketches preparatory to more finished paintings for submission to the Salon the following year, they came to define these brilliant shimmering images formed from high chroma brushstrokes as Impressionist style.

He continued to enjoy modest success at the Salon. In 1870, he had two paintings accepted, a landscape with women, and Odalisque (1870) above, for which Lise Tréhot modelled. This was perhaps inspired by Delacroix’s orientalist paintings.

Shortly after the Salon, France was at war with Prussia, and the lives of all the Impressionists were thrown into turmoil. Renoir initially took refuge to the south of Paris, but in August was called up to serve in the south-west of France. By January 1871, he was gravely ill with dysentery, and unable to rejoin his regiment until after the armistice. But Bazille was tragically killed in action, Sisley was trapped in Paris, and Pissarro and Monet fled to London.

During the summer of 1871, Renoir completed the decorated ceilings for Prince Georges Bibesco, which had been commissioned back in 1868. Then in early 1872, he and Sisley painted together along the River Seine.

Renoir painted several fine views of Paris after it had returned to normal following the Commune of 1871. Le Pont Neuf from 1872 is a good example, which is similar in many respects to Monet’s view of the same motif, and perhaps a sunnier precursor to Pissarro’s much later cityscapes. For this, Renoir is thought to have used a vantage point on the first floor of a wine merchant’s, and looks across the River Seine to the Ile de la Cité.

In 1873, he painted in the company of Sisley during the Spring, and with Monet in the summer.

One of the products of his painting with Monet was this highly chromatic view of The Duck Pond (1873) at a farm near Argenteuil. Renoir’s two canvases and Monet’s single painting are further seminal works in the development of Impressionism.

At the end of the year the Impressionists formed the Société Anonyme des Artistes in Renoir’s studio, the group that went on to hold its first exhibition the following year.

Shortly after Degas started painting dancers and scenes from the ballet, Renoir painted his Dancer (1874), but didn’t pursue the theme as doggedly as Degas. That was one of the seven paintings shown by Renoir at the First Impressionist Exhibition in 1874, listed in its catalogue as:

During the following summer, Renoir visited Argenteuil, where he painted in the company of both Monet and Manet. The Seine at Chatou (1874) is one of his more vigorously crafted works, with a water surface similar to those being painted at the time by Sisley.

Renoir’s The Skiff of 1875 is one of several paintings of watersports which he made during this period. This work is unusual for his use of viridian as the main colour for the reeds in the left foreground, and of cobalt blue as its major blue pigment.

In the Spring of 1875, Renoir again painted cityscapes. These included one of his most atmospheric, showing the wide tree-lined streets of Haussmann’s new-look Paris, in The Grands Boulevards. This shows the area near the Gare St-Lazare and the Opéra with its trees in fresh leaf.

By the 1880s, Renoir’s portraits were generating sufficient income to fund his travel to Algeria. Although his success wasn’t constant, and in 1887 his new more classical style flopped badly, he recovered in the 1890s, when he painted landscapes alongside Paul Cézanne in Aix-en-Provence.

In the early years of the twentieth century he was able to move to the Mediterranean coast, where he found relief for his severe rheumatoid arthritis. He continued painting, pushing forward his style, until his death there on 3 December 1919. Of the original French Impressionists, only Claude Monet survived him.