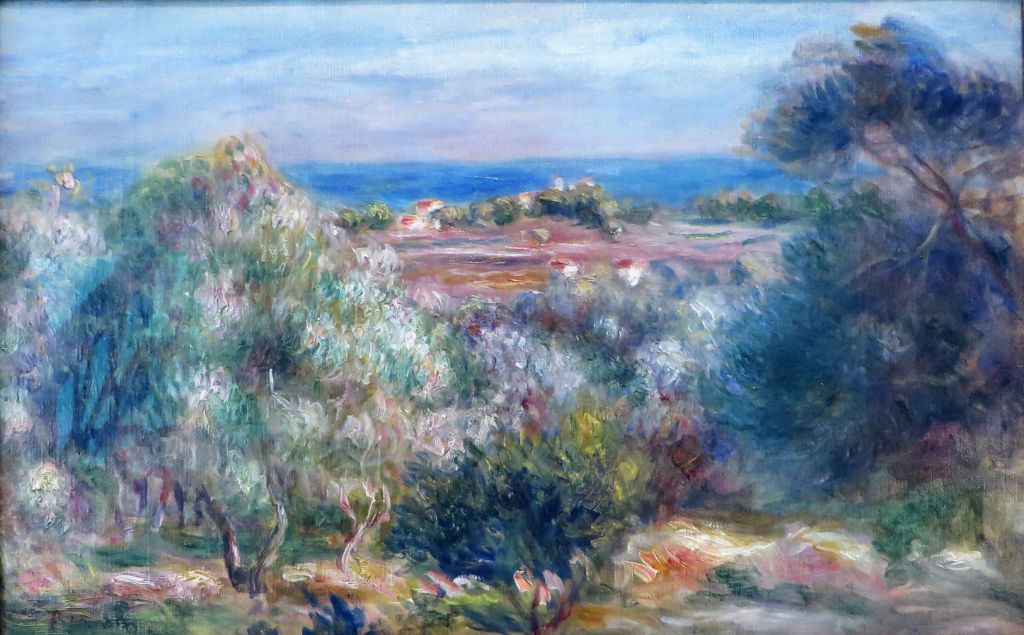 When Renoir entered the twentieth century, his painting was successful. Figurative works, portraits and a steady stream of nudes, were much in demand, although he hadn’t changed his style or approach too much. It was in his landscapes, painted more for his own pleasure, that he was most progressive, and truly Post-Impressionist. By the start of 1901, a total of eight of his paintings were in French museums, and many had sold for good sums to collectors both in Europe and the USA.

His life, though, was limited by his progressively worsening rheumatoid arthritis. He regularly ‘took the waters’ at healing spas around France, and was spending more time each year in the more comfortable warmth of the south of France. When he stayed in the north, he preferred to be near his wife’s family in Essoyes, where he had a property. In the summer of 1901, he exchanged a barn for a plot on which he built a studio. That was shortly after the birth of Renoir’s third son, Claude, in Essoyes.

Essoyes Landscape, Early Morning from 1901 gives a good idea of the rural tranquillity of the small town. Renoir’s trees had progressed significantly since his return to paint in the style of Corot a few years earlier. Their canopies here have a soft and sublime quality, as if melting away into the air around them.

His paintings in the Midi are even more adventurous. View of Le Cannet from 1901 is a plein air oil sketch of the village tumbling down the the hill overlooking Cannes on the coast, where Renoir spent much of these winters. He has applied thinned paint sparingly over the canvas, although little of the ground is showing through.

He painted The White Pierrot, a full-figure portrait of his son Jean, during 1901-02. The multiple folds in the boy’s loose costume are rendered expertly, giving the garment the look of lightweight silk.

Early in 1902, Renoir moved to Le Cannet, then a village just inland and uphill of Cannes, on the French Mediterranean coast, which was to be the future home to Pierre Bonnard. His family joined him there a little later.

Le Cannet from about 1902 shows one of the villas at the edge of the village, where a woman is hanging her washing to dry over a fence.

The Palm (1902) was also painted in the Midi, and shows a fine palm tree standing outside another villa, probably near Le Cannet too.

In early 1903, Renoir’s health wasn’t good, and he was forced to delay his departure for his winter quarters at Le Cannet until February. In April, he moved from there to the town of Cagnes-sur-Mer, close to the city of Nice. At this time, he rented a property in the centre, but was later to make the town his home. In the summer, he stayed with his family in their home at Essoyes.

In November 1903, the great Impressionist landscape painter Camille Pissarro died in Paris. Renoir attended his funeral there, before returning to spend the winter in Cagnes.

Like so many other painters who went to live along the Mediterranean coast, Renoir recognised the distinctive effects of its light. These are prominent in his View of the Sea from Haut-Cagnes, from 1903, with its great lightness and colours.

In common with several other artists including Pierre Bonnard, Renoir knew the patron of the arts and muse to many Misia Natanson, née Godebska. As her marriage to Thadée Natanson was coming to an end, with Misia’s affair with the publishing magnate Alfred Edwards, Renoir painted two portraits of her, seen here under her later married name of Misia Sert. The better-known, now in the National Gallery in London, is shown above and hints at her unhappiness.

The second, also from 1904, is below. Here she is dressed sumptuously as the partner of Alfred Edwards, but her head is buried in a book.

During the late winter of 1904, Renoir was forced to return to Paris, when a scandal erupted over an art dealer who was accused of handling doubtful or stolen artworks – the Barthélemy Affair. However, fearing that his involvement would scare off collectors, Renoir didn’t file a complaint in the end, and was able to return to Cagnes.

This oil sketch of Landscape, Entrance of the Village With A Woman and Child from some time in the period 1904-08 appears to have been painted in the north, probably close to Renoir’s home in Essoyes during the late summer.

Throughout his career, Renoir painted the occasional still life. His Strawberries from about 1905 is particularly interesting because of its contrasting colours and surface textures. Renoir didn’t appear to have been influenced by the unusual projective geometry of Cézanne’s still lifes, though.

Renoir painted numerous views of Cagnes, including this of a Terrace at Cagnes, from 1905. The yellow ochre buildings and luxuriant plants are typical of these works.

He also painted some more formal and traditional views of the town, including this of The Church of Notre-Dame de Protection at Haut-de-Cagnes (1905), the mediaeval village set a mile or two further inland and well above the seaside resort. The tall cypress tree which echoes the church tower is more substantial than his previous sublime trees, and has its own echo in the stripped trunk at the right edge of the canvas.