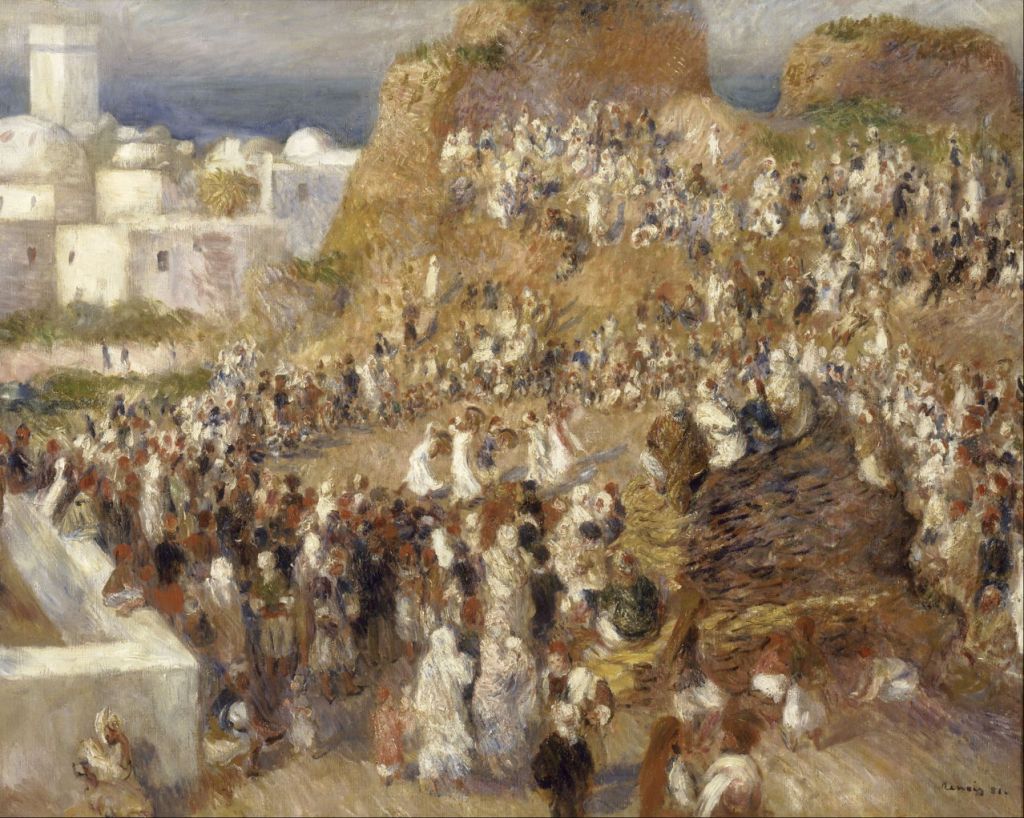 Over the last few weeks, I have looked at a selection of the paintings of Pierre-Auguste Renoir, who is famed for his portraits, nudes and other figurative works. Although I have included some of the best of those, I placed particular emphasis on his landscape paintings. Renoir is today seldom thought of as a landscape artist, but during his career he was prolific, innovative and highly influential on other Impressionists.

In this article, I look at a much smaller selection of his landscapes, and consider how they developed during his career.

Renoir had intended a traditional training in painting, and prepared for admission to the École des Beaux-Arts. He started copying in the Louvre before meeting Monet, Sisley and Bazille at Charles Gleyre’s academy, then progressed to the École in April 1862. From 1864, he exhibited at the Salon, and that summer started following in the footsteps of the Barbizon School.

He was strongly influenced by Corot, and in 1866 painted his friend Jules Le Coeur and his Dogs in the Forest of Fontainebleau. This is unusual among his works, as it was preceded by two studies, and all three were made using the palette knife rather than brushes. This makes it most likely to have been painted before Renoir abandoned the knife and returned to the brush, by the middle of May 1866.

In the summer of 1869, Renoir lived at his parents house in Louveciennes, where the Pissarros were renting a house. He visited the Monets, who were living near Bougival, and often painted alongside Claude Monet. Some of the formative moments in Impressionism if not European art occurred when Monet and Renoir visited the popular bathing houses on the Seine known as La Grenouillère, most famously seen in Monet’s painting in the National Gallery in London.

Renoir painted at least three different views of La Grenouillère that summer: that above is most similar to Monet’s, and is now in the Oskar Reinhart Collection in Switzerland. Originally conceived as plein air sketches preparatory to more finished paintings for submission to the Salon the following year, they came to define these brilliant shimmering images formed from high chroma brushstrokes as Impressionist style.

In 1873, Renoir painted in the company of Sisley during the Spring, and with Monet in the summer, evolving what was the pure Impressionist landscape. When he was painting with Monet, Renoir made this highly chromatic view of The Duck Pond at a farm near Argenteuil, another seminal work in the development of Impressionism.

During the late 1870s, Renoir moved on from this pure Impressionist style, which Sisley was to remain wedded to for the rest of his career. Renoir’s In the Woods from about 1880 is one of the most radical landscapes prior to Neo-Impressionism, which it closely resembles. Here all is light and colour, and form has dissolved into a myriad of small touches of paint.

When he visited Algeria in March and April of 1881, Renoir used this Field of Banana Trees as an opportunity to assemble brushstrokes to form its vegetation, in a manner uncannily similar to Paul Cézanne’s ‘constructive strokes’. When exhibited later in Paris, Manet himself praised this painting.

Visits to the Channel Isles of Jersey and Guernsey in the late summer of 1883 brought further change in Renoir’s style, as reflected in Sunset at Douarnenez, from around 1883, painted not far away on the north coast of France. This is a more classical Impressionist view looking directly into the setting sun.

Later that year, Monet and Renoir travelled along the French and Italian Mediterranean coast. In early 1884, on their way back to Paris, they visited Paul Cézanne in Aix-en-Provence. This marked the start of a period during which Renoir was close to Cézanne, and painted in his company, although also studying the landscapes of Corot when he was in Paris.

Renoir painted at least two versions of this view of Montagne Sainte-Victoire in about 1888-89. This is the view that became an obsession with Cézanne, here depicted in Renoir’s more conservative style. There are cotton-wool trees in the foreground, which Renoir seems to have derived from Corot. He also employs marked aerial perspective and doesn’t flatten the view. His brushstrokes are showing further signs of organisation, but they remain a far cry from Cézanne’s more radical style.

In the summer of 1892, Renoir stayed in Brittany, and apparently visited the small island of Noirmoutier, which was then joined to the north coast of the Bay of Biscay by a tidal causeway. In his painting of Bois de la Chaise (Noirmoutier) from that visit, the mimosa trees appear to melt into the warmth of the sky.

Towards the end of the nineteenth century, Renoir’s oil landscapes became more similar in appearance to watercolours, with the lighter touch seen in Landscape with Woman Gardening from about 1896. The crouching woman almost merges into the flowers around her, and Renoir’s brushstrokes are light and diffuse.

Throughout his career, Renoir’s landscapes were firmly rooted in the outdoors, and painting en plein air was at his core. With the progression of his rheumatoid arthritis, he became limited in the weather and seasons in which he could work outdoors, and his mobility steadily declined. Fortunately, by this time he was successful enough to be able to make provision: in 1901, he acquired a plot on which he had a studio built at his home in Essoyes.

Essoyes Landscape, Early Morning from 1901 gives a good idea of the rural tranquillity of this small town. Renoir’s trees had progressed significantly since his return to paint in the style of Corot a few years earlier. Their canopies here have a soft and sublime quality, as if melting away into the air around them.

His best solution to his health problems was to overwinter and then live for most of the year in the south of France. After renting a property in Cagnes-sur-Mer, he bought a small estate further inland in 1907.

The warmer climate of Cagnes saw Renoir painting many plein air oil sketches. The Port of Marseille, Fort Saint-Jean from 1906 is a marvellously loose oil sketch of crowds at the waterside and yachts, on a fine and sunny day at Marseille, just along the coast from Cagnes.

Once Renoir had moved into his new house, he started painting a series of views of The Farm at Les Collettes, Cagnes, including this from the period 1908-14. These all show the original farmhouse; he doesn’t appear to have painted the new architect-designed house in which he lived.

In his final years, Renoir’s landscapes continued to change. The Path to Les Collettes With Lime Trees from 1914 features some quite thick gestural marks in the foliage, and becomes thoroughly vague in the far distance.

By 1918, the year before Renoir’s death, the figures in Two Women in a Landscape are starting to dissolve into the vegetation around them.

I hope that you now agree that, no matter how good Renoir was at painting figures, he is one of the greatest of the Impressionist landscape painters. There is so much more to Renoir’s work than portraits and pink plump nudes.