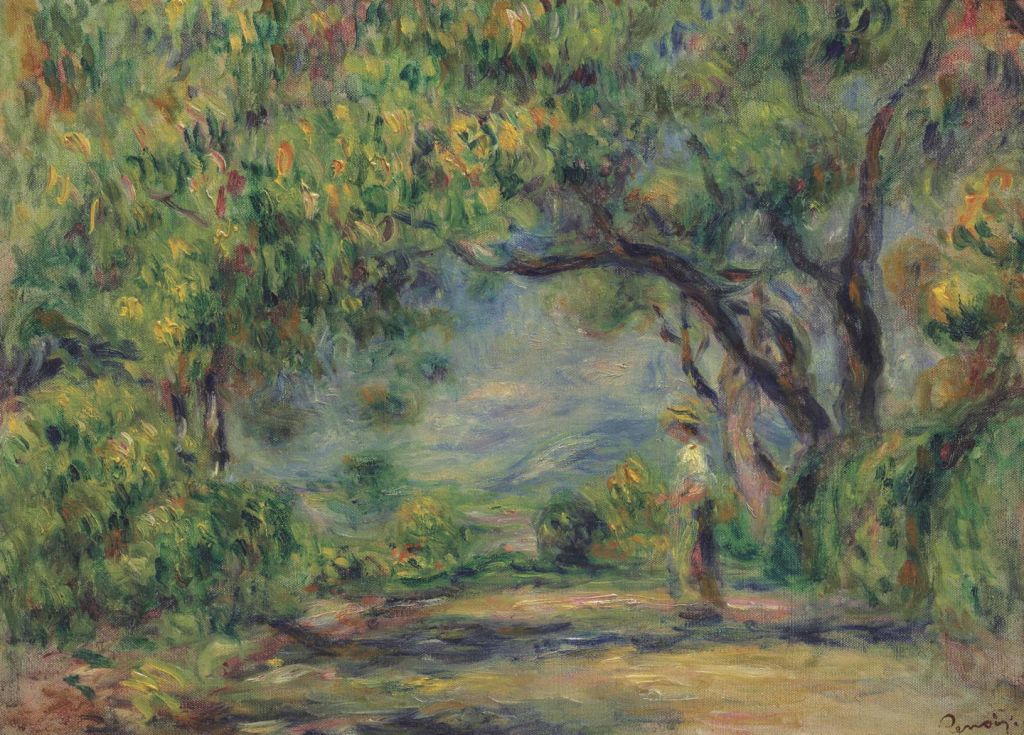 By 1911, Renoir’s rheumatoid arthritis had literally crippled him, and he was largely confined to a wheechair. It’s sometimes claimed that in his final decade, he had his brush tied or bandaged to his hand, to enable him to paint. However, that seems to be a misinterpretation of contemporary images of the artist: his fingers were often bandaged as part of his treatment, but he used orthotics and other devices to support his use of the brush. It doesn’t appear to have deterred him from painting, nor from continuing to develop his style in increasingly radical landscapes.

That year was also a landmark in his reception: he was made an Officer of the Legion of Honour, and the first monograph about his work was published, albeit in German.

Seen in isolation, this Landscape from about 1911 could be read as a dissolution of form leading towards the abstract. But viewed in the context of his other landscapes from this period, I suggest that he was continuing to push his boundaries, and remained firmly attached to the motif. He also shows marked aerial perspective.

In 1911, Renoir and his family rented an apartment in Nice, which is presumably the location he used to paint this view of the Roofs of Old Nice (1911-1919). This shows what is now called Vieux Nice, and popular with tourists. The prominent tower is one of several in this part of the city, but doesn’t appear to the the Bell Tower of the cathedral, which is perhaps the best known.

Sadly, Renoir’s arms were increasingly affected by his arthritis, and for a period he was unable to paint at all. Unsurprisingly this made him depressed.

Renoir’s oil sketch of Le Béal from about 1912 shows at least one, I think two, women at the foot of the large tree to the right of the water. His vigorous brushstrokes contrast markedly with the landscape above, and are more reminiscent of his earlier style developed in conjunction with Alfred Sisley, way back in the early days of Impressionist landscapes.

In 1913, Richard Guino, a young pupil of Aristide Maillol, the sculptor, came to live at Les Collettes. With Renoir giving him instructions, Guino realised sculptures of some of the artist’s paintings. Five of Renoir’s paintings were exhibited at the famous Armory Show in New York, from February to March.

Orange Trees and Sea (1913) is a quick oil sketch of a view over the coast near Cagnes, I believe.

With the outbreak of war in 1914, both Pierre and Jean were called up for service, and both were wounded as a result. To add to Renoir’s domestic distress, his wife’s cousin Gabrielle, his favourite model for many years, married and moved away from Cagnes.

Renoir continued to paint a great many figurative works over this period, including this 1914 portrait of Tilla Durieux, the Austrian actress born as Ottilie Godeffroy in 1880, who died as recently as 1971. At this time, she was enjoying considerable success, having just played the role of Eliza Doolittle in a German language production of George Bernard Shaw’s play Pygmalion, six months before its British premiere. She was married several times, and lived a very public life in Berlin during the 1920s. Like Rembrandt and a few other masters, Renoir captures the glistening gold in her opulent clothing.

Girl at the Foot of a Tree from about 1914 is a good demonstration of how Renoir’s soft backgrounds were losing form into more diffuse patches of colour, whilst he retains form in the figure and tree in the foreground.

The Path to Les Collettes With Lime Trees from 1914 uses a similar style, with some quite thick gestural marks in the foliage, and thoroughly vague in the distance.

The second year of the war, 1915, brought greater tragedy in Renoir’s family: Jean was wounded again, more seriously and in the leg, and the artist’s wife Aline died in late June, shortly after visiting Jean in hospital. She was only 56. His only reprieve was in having a garden studio built, making it much easier for him to paint outdoors again.

Les Collettes Farm (1915) may have been one his first paintings from his new garden studio, and shows the now familiar sight of Les Collettes.

Dominating his figurative painting were different versions of Bathers, in this case a study from about 1915. Was Renoir engaged in a final quest for the perfect motif which would somehow address his earlier failure in his Large Bathers, with its sharply classical style?

Landscape, The House Seen From the Farm is another view of Les Collettes, from 1915.

Landscape from 1915 returns to the lightness of touch of a watercolour, as in his landscapes earlier in the century.

His nudes were rearranged, this time apparently using the same model, for this study of a Bathing Group from 1916. These figures are still more strongly reminiscent of the ill-fated Large Bathers.

In 1916, Renoir must have visited Antibes, where he painted this oil sketch of its sixteenth-century Fort Carré and Antibes Lighthouse. This is not the more famous tower of Garoupe Lighthouse, which is further inland, taller and elevated, but a smaller navigational mark in the harbour, which appears almost deserted at the time.

In 1917, Renoir received an unusual honour, when The Unbrellas (1881-85) was exhibited at the National Gallery in London, as part of the Hugh Lane bequest. He was also visited by Matisse for the first time.

This Landscape from 1917 is rich in gestural brushstrokes.

Matisse visited Renoir a second time at the start of 1918, and returned frequently thereafter. Although Renoir ended his collaboration with Richard Guino in early January, by September he had invited another sculptor, Louis Morel, to work with him on terracotta bas-reliefs at Cagnes.

By 1918, the figures in Two Women in a Landscape are starting to dissolve into the vegetation around them.

Standing Woman and Seated Woman in a Landscape is among Renoir’s last paintings, probably from 1919. The woman who is standing holds a basket in her right hand; the other figure is seated on the grass, with her legs merging into its leaves.

The year 1919 started with great promise, with Renoir energetically progressing his figurative and landscape paintings. He was elevated to the rank of Commander in the Legion of Honour, and one of his paintings was exhibited next to a Veronese in the Louvre. He was wheeled around the museum in recognition.

But in November, Renoir developed pneumonia, which worsened. He died in Cagnes on 3 December 1919, and was buried next to his wife Aline in Essoyes. Of the original French Impressionists, only Claude Monet survived. It was the end of an era in European art.