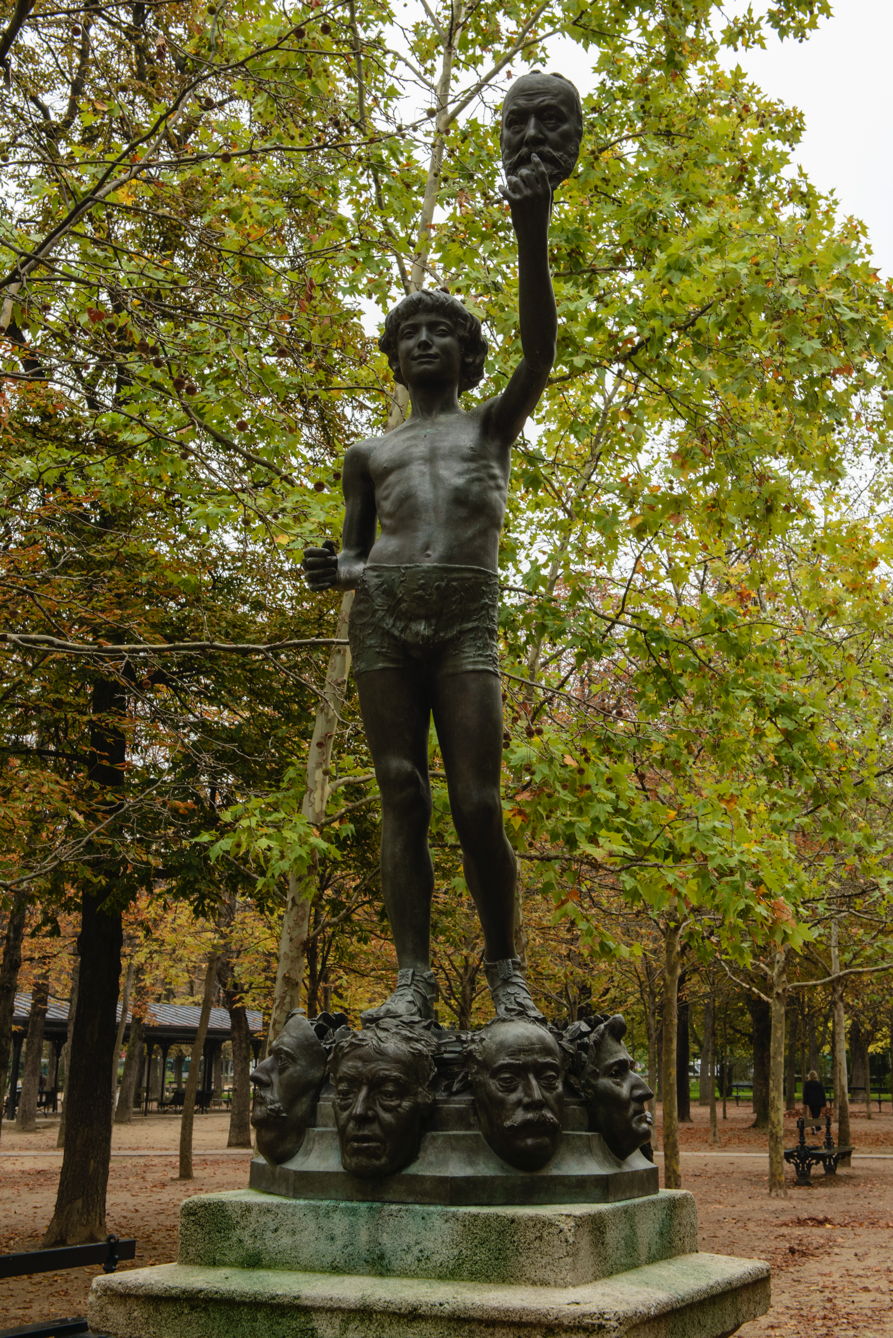 Zacharie Astruc (1835–1907), The Seller of Masks (1883), bronze, 200 × 69 × 78 cm, Jardin du Luxembourg, Paris. Wikimedia Commons. Masks shown at its foot are: Corot, Dumas, Berlioz, Carpeaux, Faure, Delacroix, Balzac, Barbey d'Aurevilly. In the right hand is the mask of Victor Hugo. Three other masks which were originally attached have since disappeared; those were of Gambetta, Gounod and Théodore de Banville.

Next to Émile Zola, the writer, art critic, sculptor and painter Zacharie Astruc (1835-1907) was one of the major influencers in French arts during the latter half of the nineteenth century. He was probably the best-known of those who showed their work at the First Impressionist Exhibition in 1874.

He was a staunch defender of Gustave Courbet and the avant garde, promoted the work of El Greco in France, and was more generally an expert on and enthusiast for all things Spanish. He became a close friend of Manet, and appears in several major pre-Impressionist paintings. Manet painted his portrait in 1866, and included him in his Music in the Tuileries in 1862, and Music Lesson from 1870. Fantin-Latour placed him, seated on Manet’s left, in his A Studio at Les Batignolles (1870), above.

Astruc also provided a short poetic excerpt to accompany Manet’s Olympia (1863), translated as:
When tired of dreaming, Olympia awakens
Spring enters on the arms of the mild black messenger
She is the slave who, like the amorous night
Comes to adorn with flowers the day beautiful to behold
The august young woman in whom ardor is ever wakeful.
This has been accepted as the most plausible origin of the painting’s title.

Astruc was an early enthusiast for Asian art, and is considered to be one of the driving forces behind Japonism, writing series of articles about the art of Japan from 1866 onwards. When he turned to sculpture and watercolour painting from about 1870, he concentrated on floral still lifes. His first paintings to be exhibited at the Salon were accepted in 1869, and he continued to show paintings and sculptures there most years until after 1900.

According to the catalogue of the First Impressionist Exhibition, Astruc showed two watercolours, a frame containing six paintings, among them The Chinese Gifts (London), a group of four landscapes of Flanders, Japanese white dolls, and a collection of objects.

Although he continued to paint, in later years Astruc’s sculptures were better known. He made a head of Manet in 1881 which was mounted on his grave, and the elaborate bronze The Seller of Masks in 1883, now in the Luxembourg Gardens in Paris. He was awarded the Legion of Honour in 1898, and a bronze medal at the Exposition Universelle in Paris in 1900.

Astruc was also a keen collector, and by 1878 had amassed a total of about a hundred paintings by Richard Parkes Bonington, John Constable, Camille Corot, Millet, Rousseau, Constant Troyon, Fragonard, Géricault, Goya, El Greco and others. These were auctioned off in 1878 in Paris.

Masks shown at the foot of Astruc’s bronze Seller of Masks (1883) are those of Corot, Dumas, Berlioz, Carpeaux, Faure, Delacroix, Balzac, Barbey d’Aurevilly. In the right hand is the mask of Victor Hugo. Three other masks which were originally attached have since disappeared; those were of Gambetta, Gounod and Théodore de Banville.

Astruc only exhibited at the first of the Impressionist Exhibitions, and died in Paris in 1907.