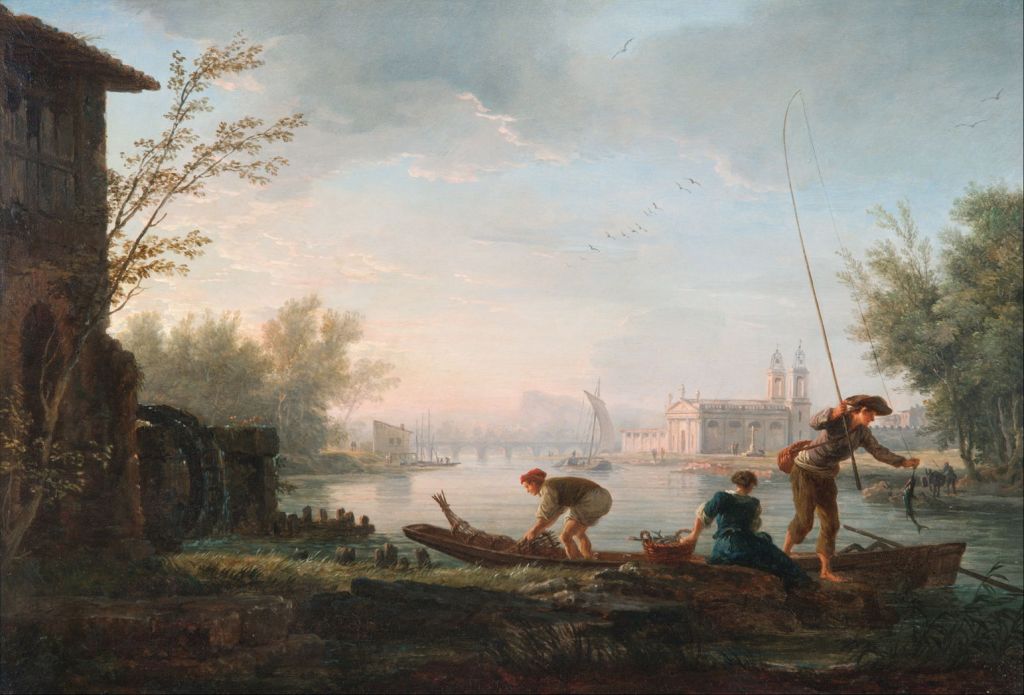 This weekend I’ve gone fishing, or angling to be more precise, as I look at some paintings in which there are people fishing with a rod and line, rather than a boat and nets. Historically, it’s one of our oldest pursuits, originally as a means of catching fish to eat. As society divided into those who feed their family on their catch, and those who could afford to throw the fish back, it became one of the most popular sports around the world.

Angling appears in painting for several different reasons. In landscapes a lone fisherman with their rod is natural staffage which imbues calm and a timelessness that the families of anglers know only too well. My first two paintings, though, are narratives which tell a classical Roman myth from Ovid’s Metamorphoses, the story of Daedalus and his son Icarus. In their bid to escape the island of Crete, Daedalus fitted himself and his son with wings, and gave him advice about how to fly with them. Once they were both ready, Daedalus kissed his son, and flew off in the lead just like a bird with its fledgeling chick in tow.

Ovid tells us that the pair flew over a fisherman holding his rod, a shepherd leaning on his crook, and a ploughman with his plough, amazing them with the sight. They flew past Delos and Paros, and approached further islands. But Icarus started to enjoy the thrill of flying too much, and soared too high. As he neared the sun, the wax securing the feathers in his wings softened, the wings fell apart and Icarus plunged to his death.

Joos de Momper’s (II) Landscape with the Fall of Icarus (c 1565) is one of a few similar landscapes which show Icarus’ descent as relatively small events taking place within a much bigger landscape, in which all three of Ovid’s references are included. To help the viewer recognise them, de Momper has helpfully painted the men’s clothing scarlet. Up at the top left, Daedalus is seen to be flying well, but Icarus is in an inverted position as he tumbles down.

Long believed to be Pieter Brueghel the Elder’s original painting, his Landscape with the Fall of Icarus is now thought to be a very good copy of the original from about 1558, possibly also painted by de Momper. It’s similar in approach: the painting is a big landscape in which Ovid’s three other activities are shown, although here with less help from colour coding.

As landscape painting became established as a genre in its own right, during the eighteenth century, anglers played a significant role, particularly in the paintings of Claude-Joseph Vernet. I show here two examples taken from his series The Four Times of Day which he painted in 1757.

Morning shows three people busy fishing successfully at the edge of a substantial river, as the sun rises behind a watermill and trees on the left. Making its way slowly towards the viewer is a barge, its sail lofted out by the gentle breeze. Gulls are on the wing, and the day promises to be fine and sunny.

Another angler takes pride of place in the foreground of Vernet’s Night from the same series. Although his position seems far from ideal for a catch, I wonder if it will end up in the pot at the right, or is destined for one of his wicker baskets and his family.

I’m sure that many great painters have also fished, but there’s one who was an enthusiastic participant in field sports, which may well have included angling: Francisco Goya.

Among a batch of Goya’s painted cartoons to be turned into tapestries for the Spanish royal family, in October 1776, was The Angler, one of several narrow vertical panels, and the only one to show fishing with rod and line.

As the great landscape artists of the early nineteenth century painted the rivers and sights of Europe, anglers became more frequent still.

In Thomas Girtin’s view of Ripon Minster, Yorkshire (1800), it’s the features of the river – its bridge, cattle, and a single angler – which steal the gaze, rather than the bulk of the minster behind.

Another superb painting from Girtin’s tour of Yorkshire that year is The Village of Kirkstall, Yorkshire (1801), which shows an angler fishing from his cart in the ford in this advanced composition.

My next painting shows what today might appear extraordinary: an angler in Bayswater, London.

John Linnell’s Evening, Bayswater from 1818, only two centuries ago, shows what was then a rural part of London, out to the west of what’s now Paddington Station. It also demonstrates the artist’s delicate handling of the light of gathering dusk, something that was to develop later in his career.

Anglers also appear as staffage in John Constable’s landscapes. This half-size and well-developed study for his Salisbury Cathedral from the Meadows places an angler in the foreground, as a thunderstorm builds over the Wiltshire countryside behind. In this case, though, the fisherman didn’t survive into the finished painting.