When you read in more depth at all the tricks that M1 chips and their CPUs pull, it’s quite bewildering. To try to simplify my little performance tests, I’ve resorted to traditional techniques using assembly language. In a bid to avoid cunning strategies such as out-of-order execution, differences in cache memory, and in main memory access times, I’ve resorted to running tight loops which rely only on accessing registers – and they’re complicated enough. This article reports further results from comparing Firestorm (performance, P) with Icestorm (efficiency, E) cores, as well as providing an updated version of my test app, AsmAttic 4.5.

In each case, I have plotted the overall time taken to complete all the test processes against the number of processes run. Although those processes are normally distributed across all the cores in a cluster, the total CPU % shown in Activity Monitor equals that expected if processes had been allocated to single cores. For example, running 2 processes at low QoS on an original M1 results in their being run exclusively on the E cores at an indicated 200% CPU, with each of the four E cores averaging around 50% CPU.

Each of these graphs is very similar, so I’ll explain how they work using the empty loop as an example. 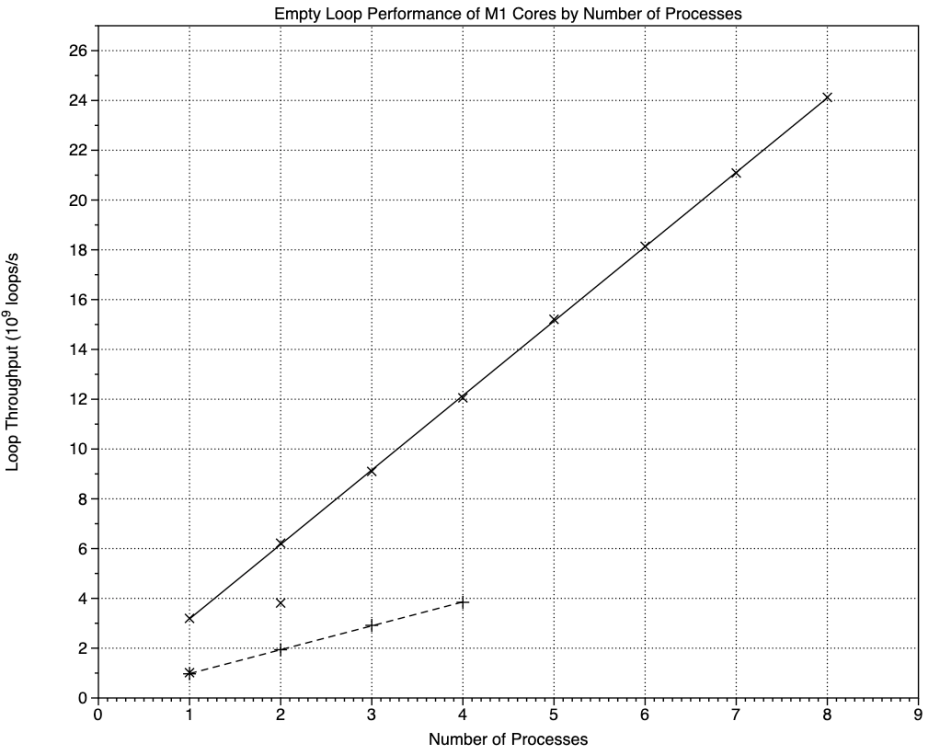 There are also two points plotted with an x which start on the regression line for the E cores, but rise sharply above it for 2 processes. Those are the results from the two E cores in an M1 Pro chip. With a single process running on them, they follow the performance of the E cores in the M1, but loading a second process results in a loop throughput which matches the total of all four E cores in the M1. That occurs despite the observation in Activity Monitor’s CPU History window that, at that QoS, the test processes are confined to the two E cores alone.

This pattern repeats with the other three assembly language tests.

These are the results for the integer test, with a greater difference in slopes between the E and P cores. Instead of an E core being about 0.32 of a P core, in this test it’s about 0.21. However, using both the E cores in an M1 Pro still results in the same throughput as all four E cores in the original M1.

These are the results for the floating-point test, which has an E/P ratio of 0.32, as with the empty loop. Again, throughput of the two E cores in the M1 Pro is approximately the same as that for all four E cores in the original M1.

NEON is very similar to floating-point, with an E/P ratio of 0.35, and the same high throughput of two E cores on the M1 Pro.

In this case, I believe that Apple’s Accelerate library calls very similar code to that used in the NEON test. Although the E/P ratio is slightly lower, at 0.27, the same high throughput is seen for two E cores in the M1 Pro. P and E throughput values are very similar to those of the NEON test. 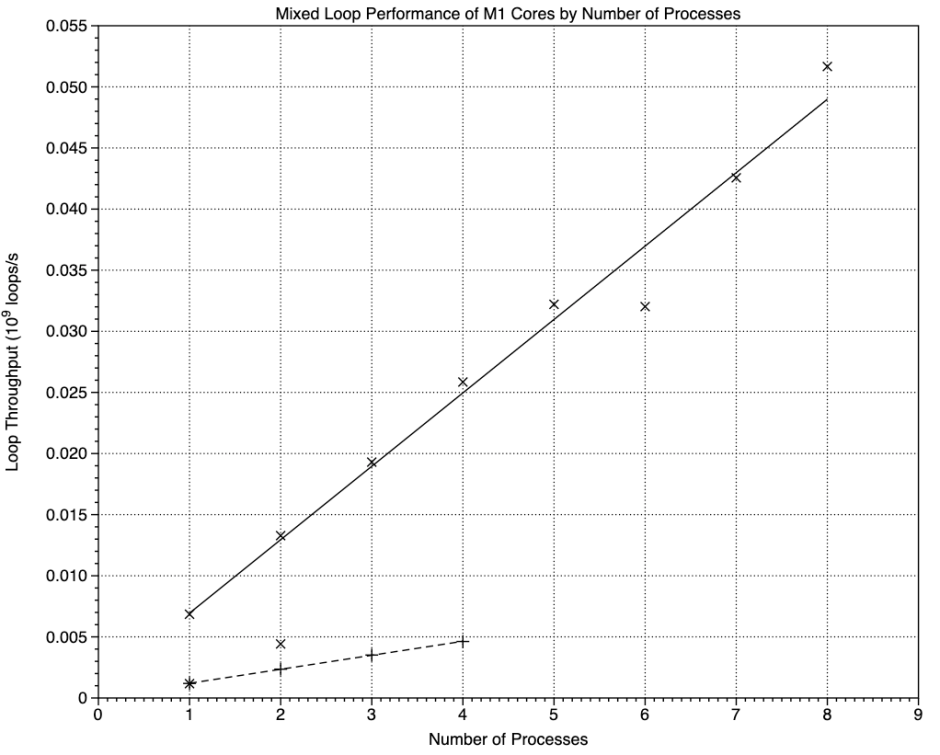 Results from the mixed test scatter more from the regression line at higher process numbers, suggesting that more complex factors come into play. The E/P ratio is the lowest of all the tests at 0.19, but the second E core in the M1 Pro still results in throughput comparable with all four E cores in the original M1.

Results from four separate tests of tight loop performance coded in assembly language confirm that E core performance is around 0.2 to 0.35 that of a P core. However, there’s a marked anomaly when both the E cores in an M1 Pro are fully loaded, as they then appear capable of matching the loop throughput of all four E cores in the original M1. Other than hypothesising that the E cores in the M1 Pro could run at a clock speed higher than the P cores, I can see no explanation for this anomaly, which is striking in all my test results, across both ALU and Floating-point/NEON units.

If you think you have an explanation, I’d love to hear it, please.

This includes a PDF which gives fuller source code for the tests used here. It’s ARM64 only, and notarized.