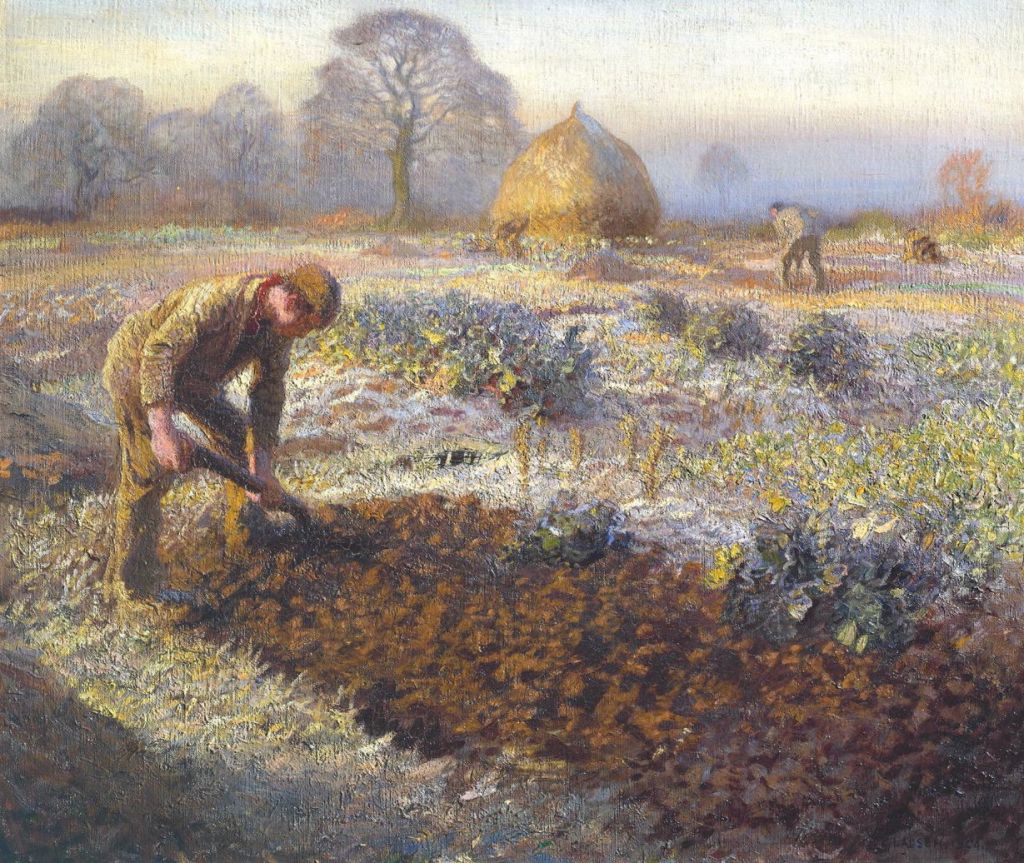 So far in this series, I have concentrated on those British Impressionists in the first wave, inspired by Whistler, Sickert and their circle. Many had trained, sometimes only for a few months, in Paris during the 1880s, and returned to Britain to paint in the style which they had seen there, or in the more muted colours adopted by many in Britain.

Others, including some who returned from Paris painting in Naturalist style after Jules Bastien-Lepage, or who trained later, turned to Impressionism later, typically at the end of the nineteenth or in the early twentieth century. Sir George Clausen (1852–1944) is a particularly interesting example, as his work developed from rural Naturalism, through Impressionism, to a distinctive Post-Impressionist style. His later paintings, in particular, use light and colour to create a wonderful atmosphere.

Clausen was part Danish, being the son of an interior decorator from Denmark, and part Scottish from his mother. Born and brought up in London, he was apprenticed to a London firm of decorators at the age of 14, and worked in their drawing office. He attended evening classes in South Kensington, London, at the Government Art Training School (which later became the Royal College of Art), where he obtained his art teacher’s certificate in 1877. During this period he also visited France, Belgium, and the Netherlands; while he was in France he studied under Bouguereau and Robert-Fleury.

His early works, during the 1870s, were rather undistinguished landscapes after the Hague School, and cityscapes of his London surroundings. But these gave him a taste for life in the country, and when he married in 1881, the couple moved out to Childwick Green in what was then rural Hertfordshire. From there he visited France, painting in the artists’ colony of Quimperlé, where he first became familiar with painting en plein air.

It was at Childwick Green that he started to paint realist scenes of the countryside, particularly of its many manual workers. Following the lead of Jean-François Millet, and under the more contemporary influence of Jules Bastien-Lepage and Léon Lhermitte, his peasants were not romanticised but gritty and wrinkled. Among his more successful paintings of this period is Day Dreams (1883), which is also one of his earliest works to show a particular interest in light and colour.

Determined to reform the selection process of the Royal Academy of Arts in London, he was a founder-member of the New English Art Club (NEAC) in 1885, and became its most widely respected member. He moved to St Albans, Hertfordshire, for a time in 1884.

Bird Scaring (1887) is an excellent record of one of the army of children who were sent out into the fields with noise-making devices, such as the slabs of wood shown here, to scare scavenging birds away from the fields. The boy’s tattered clothing and makeshift gaiters are typical of dress among the rustic poor of the day.

The Stone Pickers (1887) shows another lost rural occupation, of picking up stones from agricultural land to improve it, and to make it easier to work with machines.

A Ploughboy (1888) was shown at the Grosvenor Gallery in 1888, where it was enthusiastically received as “the high water mark of realism”. There is also a smaller study for this painting, which is far more gestural and may have been sketched en plein air. Ploughboys were required to lead the team of horses which pulled ploughs through the land, and this boy’s plough is shown in the background.

In the late 1880s, he moved to Cookham Dean in Berkshire, where one of his favourite models was a local woman, Mary Baldwin, who also worked as the family’s nanny. She is the woman in the foreground of his The Girl at the Gate (1889), which shows strong influence of Bastien-Lepage.

Brown Eyes (1891) shows another of his favourite local models, Rose Grimsdale, also from the village of Cookham. At this time he was under contract to the Goupil gallery in London.

In that same year, he moved to Widdington in Essex, where he re-evaluated his painting style. As a result, throughout the rest of the 1890s he used increasingly intense colour and light.

Noon in the Hayfield (1897) had evolved in studies and other paintings over the period 1892-7, and demonstrates his transition to Impressionism.

Although he had been a founder-member of the New English Art Club, with the aim of reforming the Royal Academy of Arts, he had continued to exhibit at the Academy, and in 1895 was elected an Associate.

By the end of the 1890s, as shown in his Apple Blossom (1899), his paintings had become floridly Impressionist, with a painterly facture, high chroma, and looking far less influenced by Millet and Bastien-Lepage.

Although still an Associate, Clausen had become so prominent in the Royal Academy that he was appointed its Professor of Painting in 1904, a post which he held for two years, until he was finally elected a full Academician.

He continued to live at Widdington until 1905, during which he painted some of his finest works, including A Frosty March Morning (1904), which is sometimes known as The Allotment Garden, Winter. It shows influence from Pissarro’s paintings of early winter morning frost and mist, but its style is distinctively Clausen’s.

He also came to excel in capturing light and movement. In his Gleaners Coming Home (1904), swirling brushstrokes make the gleaners’ clothes appear to move as they walk home in the evening sunlight. Gleaners were still commonplace in the Essex grain fields at harvest time, trying to scrape enough waste grain from the ground to feed their families.

The Gleaners Returning (1908) is a marvellous contre-jour view, again with swirling brushstrokes imparting movement in the women’s clothes.

Clausen was too old for military service during the First World War, but in 1917 he was appointed an official war artist, and assigned to Woolwich Arsenal in London. After the war, his landscape painting concentrated around his country cottage at Duton Hill, near Dunmow in Essex. Although termed a ‘hill’, Essex is so flat that anywhere else this minor hillock would have passed unnoticed.

His depiction of the cold and mist of a Morning in November (1922) again looks back to Pissarro, but in his distinctive Post-Impressionist style.

His work during the war had been well-received, and in the 1920s he was also invited to paint several murals, including one celebrating Wycliffe’s English Bible for the Palace of Westminster (the Houses of Parliament), London, in 1926. He was rewarded with his knighthood when it was completed.

He continued to paint and exhibit at the Royal Academy through the 1930s, when he moved from Duton Hill and spent most of his time at his house in St John’s Wood, in the suburbs of London.

My Back Garden (1940) was painted when he was well into his eighties, an impressive contre-jour view of the London suburb.