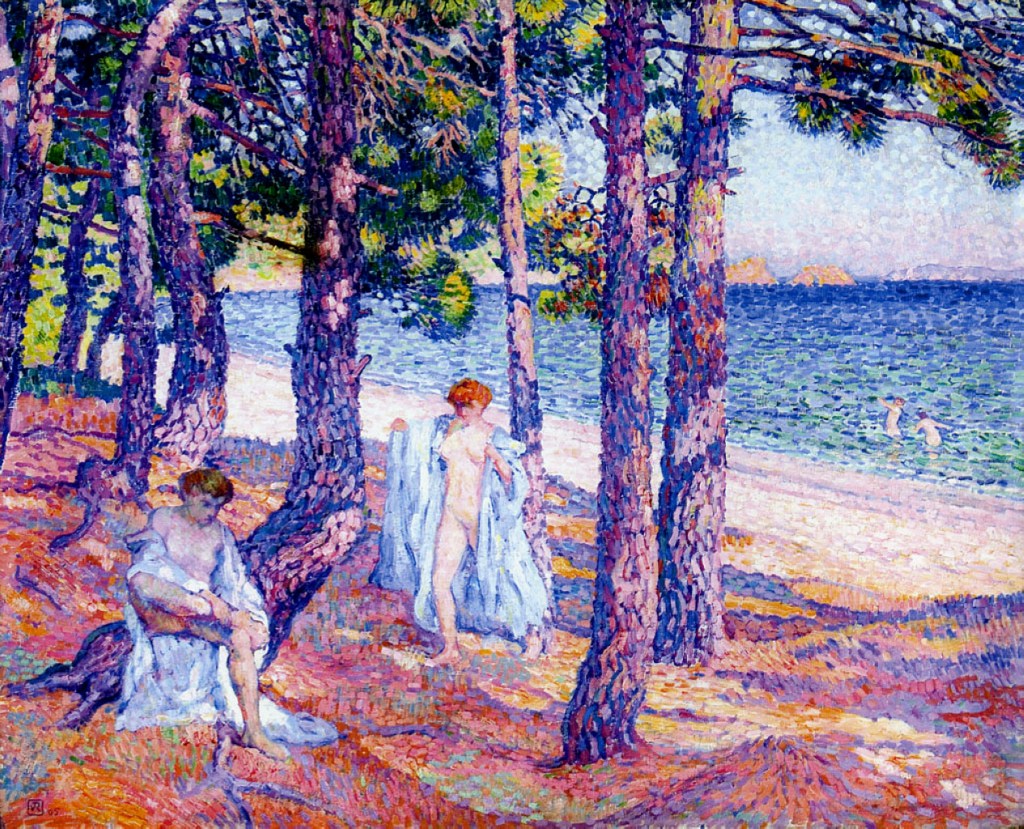 As summer steadily slips away from us in Northern Europe and America, I felt one last glimpse of the sun would cheer us before leaf-fall. This weekend we’re off to the Midi, the south of France, the cradle of Post-Impressionism and outdoor studio – le grand atelier du Midi (the great workshop of the Midi) – for painters in the early twentieth century. To be even more precise, we’re off to Saint-Tropez and the beach resorts nearby.

Along the Mediterranean coast between the busy port and city of Marseille and Nice was a series of small villages and ports which slumbered among pine-backed beaches and rocky promontories. Before the coming of railways, travelling to them from the growing industrial cities of the north of France took days or weeks, and the villages remained largely isolated.

Then in 1856, the first express trains started making the 862 km (536 miles) journey from the Gare de Lyon in Paris to Marseille. By the 1920s, when Coco Chanel made Saint-Tropez famous, a succession of artists had visited this coast, and many had gone to live there. At the end of the nineteenth century, the centre of development of painting in France had shifted from the countryside around Paris, where the Impressionists had painted in front of their motifs, to the Midi and this section of coast.

This move had a dramatic effect on painting. Because of the intense light and dazzling colours, it was if someone had turned the chroma setting to full. No matter what an artist’s choice of style, everything went full-on Fauvist.

After spending much of his career living and painting in his native Belgium, and the north of France, Théo van Rysselberghe started exploring this section of coast towards the end of the nineteenth century, at first in the company of Paul Signac. In this view of Pointe Saint-Pierre, Saint-Tropez (1896) he used Divisionist technique to model these pines in the hot light of the Mediterranean coast.

Renoir’s paintings in the Midi are his most adventurous. View of Le Cannet from 1901 is a plein air oil sketch of the village tumbling down the the hill overlooking Cannes on the coast, where Renoir spent much of these winters. He has applied thinned paint sparingly over the canvas, although little of the ground is showing through.

Paul Signac moved to the south of France from 1897, living at first in Saint-Tropez, when it still slumbered undiscovered as a resort. His view of The Port of Saint-Tropez from 1901-02 also shows Divisionism at its height.

Like so many other painters who went to live along the Mediterranean coast, Renoir recognised the distinctive effects of its light. These are prominent in his View of the Sea from Haut-Cagnes, from 1903, with its brilliant lightness and colours.

In the early years of the twentieth century, van Rysselberghe started to paint recurrent motifs of a loose group of pines behind the beach. In The Mediterranean at Le Lavandou (1904) there are no bathers or other figures, just the curved and twisting trunks and branches, with their brilliant foliage and dark blue shadows.

The following year, with the help of his friend, the painter Henri-Edmond Cross who had moved to this stretch of coast in 1891, van Rysselberghe found himself the right place to retire to, and in 1911 he settled at Saint-Clair.

Graniers Beach is one of Ker-Xavier Roussel’s landscapes from 1904, showing what’s now one of the more popular beaches in the resort of Saint-Tropez. Three people are taking the sun in this otherwise peaceful and deserted spot; two of them are almost completely undressed, the third squatting to read.

In Théo van Rysselberghe’s more secluded Bathers under the Pines at Cavalière (1905), these young women were able to follow tradition and go naked. This beach has changed enormously over the last century too: this area has become the popular resort at Le Lavandou, near Saint-Tropez.

Roussel’s Venus and Love at the Seaside from 1908 shows a classical mythical scene, of Venus and her son Cupid sitting together on the Côte d’Azur rather than Greece or Italy. Cupid is clutching a blackbird, which has presumably been shot with one of his arrows. Adding such a mythical scene to a landscape harks back to the dawn of French landscape painting with Nicolas Poussin.