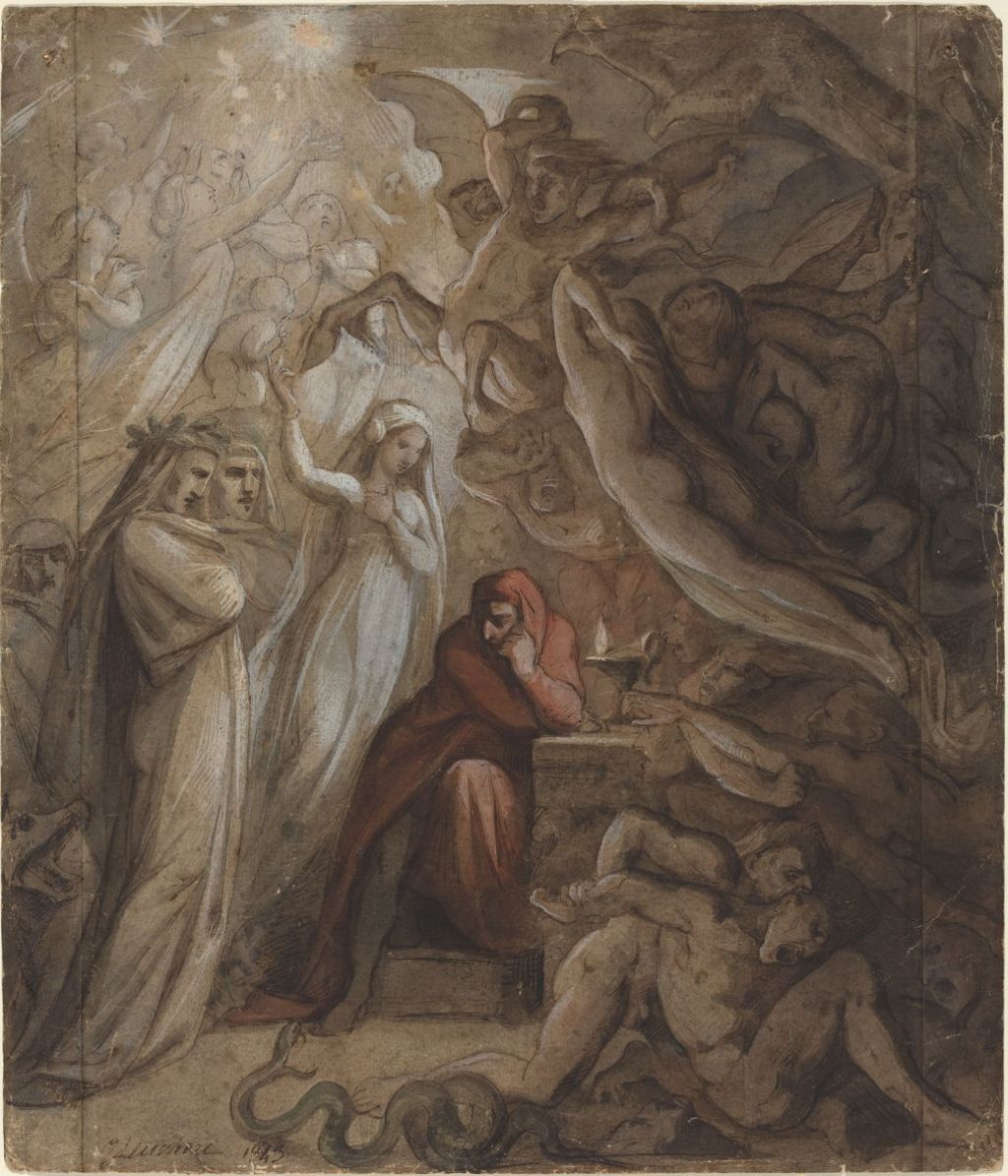 On 14 September 1321, seven hundred years ago this Tuesday, Dante Alighieri died in exile in Ravenna, Italy. After the Bible and classical myths recorded by Ovid, Dante’s Divine Comedy must be the literary work which has been most frequently painted, from a few years after it became available to the present. His influence on European civilisation and culture still stands, with abundant references to the opening book of the Divine Comedy, Inferno.

Durante di Alighiero degli Alighieri, known as Dante Alighieri or simply Dante, was born in Florence in about 1265. The city-state was growing very rapidly at the time, and was a hotbed of the Renaissance. Its politics were dominated by two family-based factions, the Guelphs, to whom Dante was loyal, and the Ghibellines.

When Dante was only nine, he met and apparently fell in love with Beatrice Portinari, but at the age of twelve he was betrothed to Gemma di Manetto Donati, a member of the powerful Donati family. Beatrice, or Bice, remained a flame in his emotions, even after she died in 1290, and she inspired his Vita Nuova as well as much of The Divine Comedy.

The year after the death of Dante Gabriel Rossetti, one of those associated with the Pre-Raphaelites, Henry Holiday, painted the second occasion on which Dante claimed he met with his beloved, in Dante meets Beatrice at Ponte Santa Trinita (1883). Holiday devoted great effort to making this view as authentic as possible. In 1881, he travelled to Florence to make studies, and researched the buildings at the time, which he turned into clay models for a 3D reference. He also got John Trivett Nettleship, a noted animal painter of the day, to paint the pigeons so that they were faithful.

Rossetti’s painting of Dante’s Dream on the Day of the Death of Beatrice from 1880 is a good example of the attention devoted by the Pre-Raphaelites to Dante’s relationship with Beatrice, although much of this may have been imaginary, and based on courtly rather than physical love.

Earlier, Rossetti had painted a more fictionalised watercolour of The First Anniversary of the Death of Beatrice (1853), showing Dante being comforted as he is drawing an angel on that day of remembrance for his beloved. This is situated in central Florence according to the view through the window at the right, but looking out of the door at the left, there’s an incongruous country garden.

In the late thirteenth century, the Guelphs were on the ascendant, and in 1289, Dante fought for them in the Battle of Campaldino, at which Ghibelline exiles from Florence were soundly defeated. But following this, the Guelphs divided into White and Black factions, in part over the role of the Pope in Florentine affairs.

Dante was deeply involved in Florentine politics, and rose to its highest position as a city prior. He was caught when in Rome on a mission to Pope Boniface VIII, and in 1302 was sentenced to exile in perpetuity for alleged crimes against the rival faction. If he were to return to Florence without accepting his ‘crime’ and paying a heavy fine, he faced being burned at the stake.

The poet spent the rest of his life in exile, completing The Divine Comedy in 1320, just a year before his death.

Marie Spartali Stillman’s superb watercolour of Dante at Verona from 1888 was one of three related works which she submitted for the inaugural exhibition of the New Gallery, and refers both to Dante’s exile and the poem of the same title by Dante Gabriel Rossetti. That poem is set in the public garden in Verona, where “wearied damsels” request the poet to recite his early poem Vita Nuova.

Domenico di Michelino’s fresco of Dante and the Divine Comedy from 1465 is the poet’s memorial in Florence cathedral (Duomo). It shows Dante holding a copy of The Divine Comedy as he points out sinners descending to Hell. Behind him is the mountain of Purgatory, at the top of which is Paradise. To the right is the city of Florence, complete with Brunelleschi’s famous dome – a surprising anachronism, given that the dome wasn’t completed for more than a century after Dante’s death.

Dante’s Divine Comedy is rich with references to stories of human weaknesses and failings. Jean-Jacques Feuchère’s Dante Meditating on the “Divine Comedy” from 1843 captures this particularly well, with Dante sitting at work in the midst of the many spectres he invoked in its lines.

From the start of the Divine Comedy, when Dante and Virgil set off on their fictional journey, every moment has been painted or drawn, often by major artists. Corot’s Dante and Virgil from 1859 was exhibited that year at the Salon, but then lay forgotten in his studio. When he rediscovered it in the early 1870s, he was so impressed with his work that he offered it to the French state. It wasn’t until after Corot’s death that it was finally sold, to the Boston collector Quincy Adams Shaw.

In tomorrow’s article celebrating the life and work of Dante, I’ll look at a small selection of paintings based on his writings.