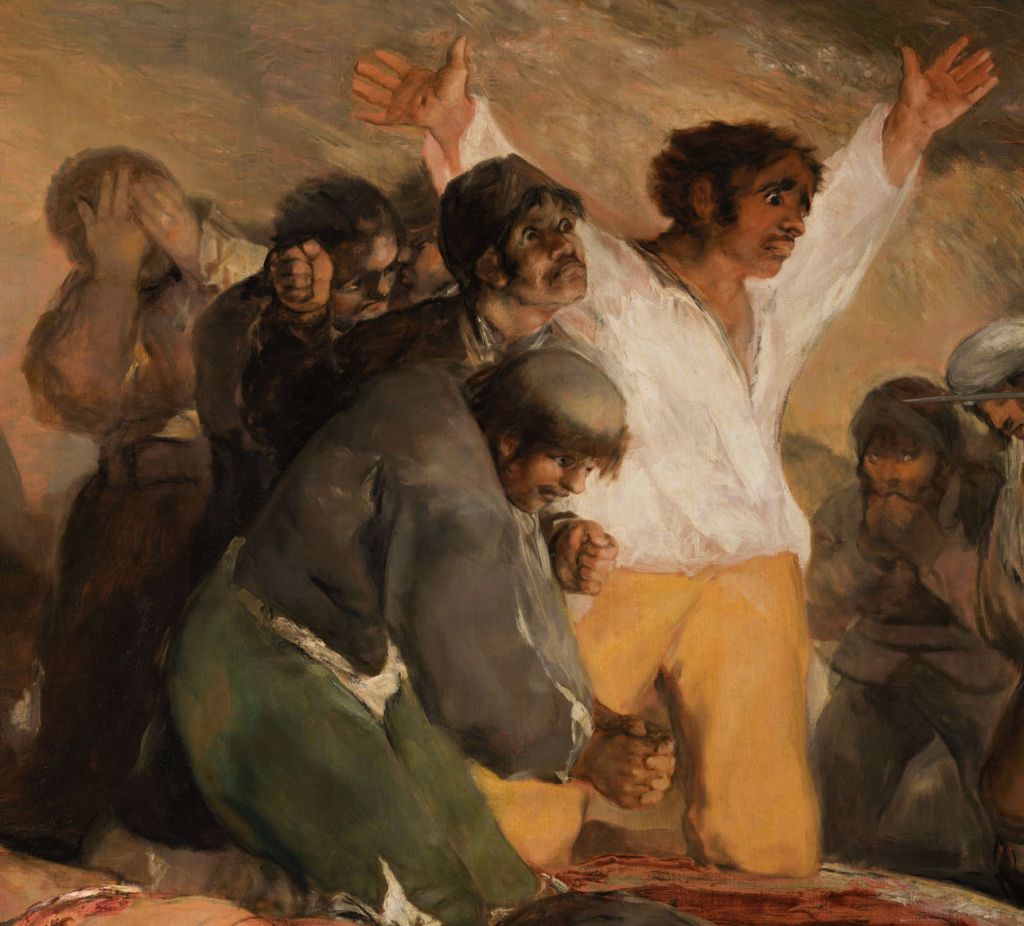 At the start of 1814, Francisco Goya (1746–1828) had been a widower for nearly two years, was profoundly deaf, and hadn’t been paid any of his salary since early 1808. He was penniless, but still alive and able to paint like no one else in Spain. At the end of February 1814, he proposed to the Regency of the restored Ferdinand VII that he painted two scenes showing the bravery of the people of Madrid when Napoleon’s armies had invaded in 1808. The large paintings which he made are two of the most important paintings of this period in Spanish history, and one is a major work in the European canon of art.

The people of Madrid had rebelled against Napoleon’s troops on 2 May 1808, in an uprising which led to fierce battles. The following day, before dawn, the French forces rounded up and shot hundreds of the rebels at various locations in Madrid.

The Second of May 1808, also widely known as The Charge of the Mamelukes (1814) shows the vicious fighting between the citizens of Madrid and a detachment of Mameluke mercenaries of the French Imperial Guard in the Puerta del Sol. Although today the less well-known of this pair, and the less modern in style, it’s a powerful image of street fighting. Goya has toned down the buildings surrounding the scene so that they appear to be painted scenery, but his deep perspective prevents them from appearing flat. It’s an unusual effect, particularly before the advent of photography.

Goya’s depiction of the early morning executions of The Third of May 1808 (1814) is the more radical. He adopts the clear colours and form which had been popularised in the paintings of David, combining that with the narrative technique which he had honed in the story of Friar Pedro, and creates what must be the first major modern painting of the century.

The scene is set by the hill of Príncipe Pío, in the area known now as Moncloa. As it’s still dark, he recesses the distant buildings into the night and places his martyr-heroes in the spotlight. The firing squad is arrayed in military style, regular and rhythmic at the right. Their victims are a ragged assortment of terrified citizens, the next to be shot wearing a white shirt of surrender, with his arms reminiscent of the crucified Christ.

Facial expression and body language are at their peak in this figure wearing the white shirt. He is strongly supported by the other victims, and the blood and corpses at their feet make it abundantly clear what is about to happen to them.

This classical approach to the narrative of an execution by firing squad contrasts with later paintings by Manet, in The Execution of Emperor Maximilian of Mexico (1868), and Gérôme’s The Death of Marshal Ney (1868).

The most immediate difference between these is timing of the scene in the painting: Goya opts for the moment before the shots, which is the instant of greatest drama; Manet prefers a few moments later, when the shots have just been fired, which is technically the climax; but Gérôme waits until the body is well dead and the squad marching away, for maximum coldness and detachment.

Goya wasn’t done with that guerilla war, though. Around 1814, he also painted scenes from the period between 1808 and 1814. In 1810, a shoemaker from the village of Almudevar in Aragon set up a munitions factory in the nearby Sierra de Tardienta to provide those fighting against the French occupation with ammunition. Perhaps inspired by his own journey to Zaragoza in late 1808, Goya depicted this on panels, using a sketchy style normally seen in the paintings which he made for himself.

Making Gunpowder in the Sierra de Tardienta (c 1814) shows the guerillas making charcoal at the right from woodblocks, and pounding it to the right granularity to mix with saltpetre.

Making Shot in the Sierra de Tardienta (c 1814) shows the casting of ball shot from molten metal, which has been heated in the open-air furnace at the right.

There is a more recent and alternative account of how Goya came to create these four paintings. In that, his request for royal support early in 1814 was to fund these two paintings of the secret munitions factory of the guerillas, which were painted in April-May 1814, following which he painted the much larger pair of The Second and Third of May, which weren’t finished until the autumn.

For Goya this wasn’t an easy time, though: despite his paintings, he was among the many who were purged from court in May 1814, and wasn’t back in favour until April of the following year.