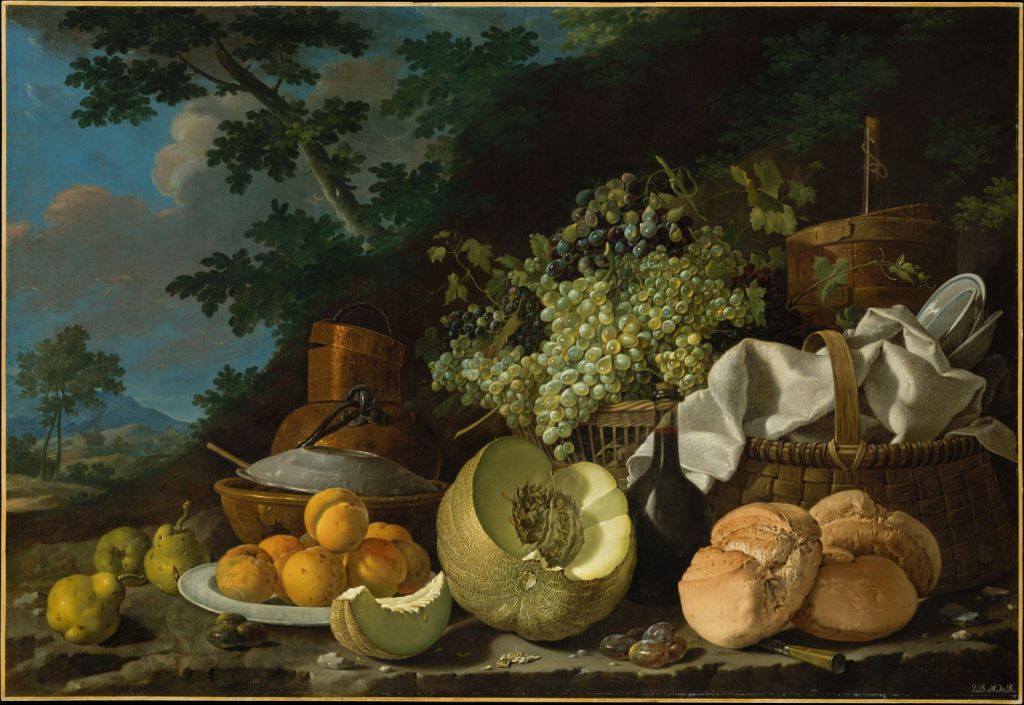 This year, I will be looking at the art and career of Francisco Goya (1746-1828), one of the great Spanish masters, and a major figure in European art history. I suspect that, like me, you’re familiar with some of his best-known paintings but less clear about the rest. To set his work in context, this article and its sequel tomorrow look at Spanish painting from the years immediately preceding his career up to the early nineteenth century. These conveniently divide with the influence of Jacques-Louis David (1748–1825), so today’s paintings are dated between 1757-1775.

For much of the period covered here, and Goya’s most productive years, Spain was a Catholic monarchy under the Bourbon Kings Carlos III and IV. Europe was turbulent at the time, though, with wars between England and France in which Spain allied itself with France, the invasion by Spain of Portugal, a staunch ally of England, loss and gain of Spanish colonies in North America, and the French Revolutionary War, Revolution, and rise of Napoleon. In 1808, Napoleon’s forces invaded Spain and triggered the Peninsular War, which was to influence Goya’s painting profoundly.

Goya’s first teacher was José Luzan y Martínez (1710–1785), a Baroque artist whose academy in Zaragoza was one of the leading schools in Spain. Luzan’s Saint Valero, Saint Vicente the Martyr, Saint Pedro Arbués and Saint Dominguito de Val, in Glory from 1757 is a magnificent if very traditional example of his paintings.

Francisco Bayeu y Subías (1734–1795) was a fellow-student, and when Goya married in 1773, became his brother-in-law. Although Bayeu is little-known today, at their best his paintings can be impressive. His Olympus: The Fall of the Giants from 1764 shows the war between the Titans and Olympian gods, and was presumably hung under a ceiling. Bayeu was Lieutenant-Director of the Real Academia de Bellas Artes de San Fernando, the senior academy in Spain at the time, until 1788.

During Goya’s training and for much of the early part of his career, the dominant force in Spanish painting was the German painter Anton Raphael Mengs (1728–1779). Mengs spent much of his career in Rome, but undertook two major commissions in Madrid for King Carlos III, who was particularly fond of his work.

Mengs’ Noli me tangere from 1769 is one of a cycle of four paintings on the Passion of Christ which Carlos III commissioned for his bedroom.

Mengs had earlier been director of the Vatican painting school, and in 1772 painted this Triumph of History over Time as a fresco in the Vatican’s Camera dei Papiri. This shows Father Time with his long grey beard and scythe in the foreground, behind whom History is busy keeping records. She looks up to the fresh new face of Janus, as the old one looks away to the right.

Mengs’ Perseus and Andromeda from 1773-6 sets this familiar story rather differently. Here Andromeda is more fully dressed than Perseus, although it’s the latter who is centre stage. The artist covers both versions of this popular myth by giving Perseus winged sandals and Pegasus, and Medusa’s head is safely stowed in his scarlet bag. A winged putto, looking quite serious, is skipping off to the right, and at their feet rests the great snout of the dead Cetus, to which Perseus’ right index finger points.

Gregorio Ferro Requeijo (1742–1812) was another pupil of Mengs who became a leading figure in the Real Academia de Bellas Artes de San Fernando. He became its Lieutenant-Director in 1788, and in 1791 took over from Goya as its Director of Painting. His Allegory of the birth of the infant Carlos Clemente from 1772 celebrates the first son of King Carlos IV of Spain, born in 1771 and died in 1774.

There were several other portrait painters who found favour with the nobility and the court. Among those who found royal favour and went on to paint frescos for the King was Antonio González Velázquez (1723–1793), whose undated Crucifixion with St Michael shows his late Baroque style.

Surprisingly, still life painting was another genre which was well-received at court.

Luis Egidio Meléndez (1716–1780) was the best of specialist still life painters of the time. His Still Life with Oranges, Jars, and Boxes of Sweets from about 1760 develops traditional themes from the Dutch Golden Age.

Meléndez’s Still Life with Salmon, Lemon and Three Vessels from 1772 is perhaps more reminiscent of Jean-Baptiste-Siméon Chardin’s love for the rich colour of copper.

Meléndez also painted a series of rather grander meal-settings, including this Afternoon Meal (La Merienda) from about 1772. Although many of his still lifes were painted for the private collection of the Prince of Asturias, later to become King Carlos IV, Meléndez appears not to have been commercially successful, and died in poverty in 1780.

Among other artists painting still lifes at the time was Bartolomé Montalvo (1769-1846), whose undated Bodegón follows in the Spanish tradition.

As with painting in France, the late eighteenth century was to bring major change, in the paintings of Jacques-Louis David, as I’ll show tomorrow.