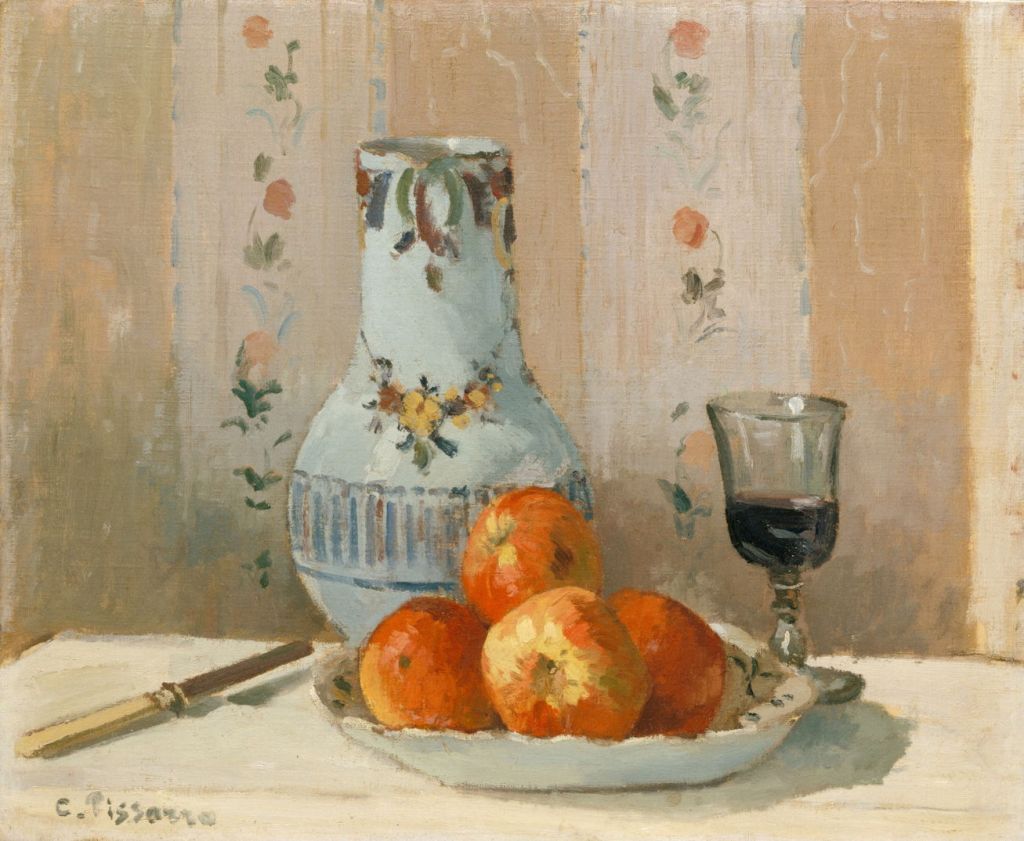 The apple is not only one of our oldest cultivated fruits and most widely distributed across Europe, Asia, North America and in the Southern Hemisphere, but it’s also the fruit which in myth and legend has twice determined the future of human civilisation. The first was the forbidden fruit in the Garden of Eden, and the second was Eris’s golden prize for the beauty contest between goddesses which led to the Trojan War.

It has been painted extensively in both roles, and in many rustic views, so it’s not surprising that it’s also one of the most enduring elements in still life painting.

It first appears in the few still lifes of classical Roman painters: this example is thought to have been painted between 63-79 CE, and was unearthed from the remains of Pompeii. Its image of apples and grapes in a glass vase is thought to refer to a rite associated with death.

Caravaggio’s milestone painting of a Basket of Fruit from the end of the sixteenth century shows what at first appears to be a trompe l’oeil basket of summer fruit, including peach, apple, pear, figs, quince and grapes. But these aren’t fit for consumption; with the exception of the quince, all are victims of parasites or disease. Suggestions as to how this should be read include fading beauty, natural decay, and as a metaphor of the Catholic Church of the time.

Among Clara Peeters’ many innovative still life paintings, Fruit, Dead Birds and a Monkey (1615-20) shows a not dissimilar collection: the grapes are covered with bloom, a peach is going rotten, and there’s a fly on an apple. The little monkey, busy feeding from nuts, is gazing at a small pile of dead birds. This could be read as a vanitas painting, or, given that it’s thought to have been one of her late works, it may have marked the end of her career as an artist.

Juan de Zurbarán, son of the more famous Francisco, painted this unusual chiaroscuro still life in 1639-40. Still Life with Fruit and Goldfinch includes a butterfly and a wasp, which has settled on the grapes, and the apple to the right is disfigured. Tragically, this Spanish artist died during an outbreak of the plague which ravaged Seville in 1649, at the age of only twenty-nine.

In Cornelis Norbertus Gijsbrechts’ trompe l’oeil of a Cabinet in the Artist’s Studio (1670-71) his collection of fruit, including apples, appears in a painting within the painting.

At last, when we reach Anne Vallayer-Coster’s Still Life with Brioche, Fruit and Vegetables from 1775, there’s a more conventional stack of fairly regular apples resting on their leaves.

Camille Pissarro’s Still Life with Apples and Pitcher, from 1872, is traditional in his use of the fruit among a range of objects with contrasting optical properties. Although he has applied colour in visible brushstrokes, these apples retain a smooth texture.

Gustave Caillebotte’s Fruit Displayed on a Stand from about 1881-82 includes plenty of apples. In this unusual centrifugal composition, central boxes of blueberries and plums are dominated by the brighter and larger displays of apples, pears, oranges, tomatoes, and figs at the edges of the canvas. This was a compositional device often used in Naturalist (and other realist) painting to enhance the ‘action’ and dynamics of a scene, and was unusual among the Impressionists.

Claude Monet painted this Still Life with Apples and Grapes in 1880. As you would expect, the apples have now become quite painterly, and not the smooth-skinned fruit in your fruitbowl.

Although much better-known for his sunflowers, Vincent van Gogh’s Grapes, Lemons, Pears, and Apples, from 1887, pushes further in colour, and is entirely composed of brushstrokes in rhythmic arrays.

While Henry Lerolle’s main connection with the Impressionists was as a patron, he was also a fine artist, and painted several large murals. Later in his life he took to painting apples in still life compositions, such as this from about 1890.

If there’s one artist who should be associated with apples, it’s surely Paul Cézanne, who must have created more still lifes of apples than any other European artist.

His oil still lifes, such as this Basket of Apples from 1890-94, remain fairly traditional in their approach, although they defy convention in their perspective.

His late watercolour still lifes are something else, though. The vibrant primary colours of this Still Life with Apples on a Sideboard from 1900-6 are quite unlike those in oils. At this stage, he uses white space primarily for their highlights.

Perhaps the finest of all is this Still Life with Carafe, Bottle, and Fruit from 1906, the year of his death. The apples show centrifugal use of colour which extends white space beyond highlights, and the carafe is outlined in strokes of ghostly blue, as are the grapes in the centre.

Finally, one of Nikolai Astrup’s few still lifes, Interior Still Life: Living Room at Sandalstrand from about 1921, features a bowl of apples, among a collection of objects including an unusual articulated wooden figure leaning against a pitcher of milk.