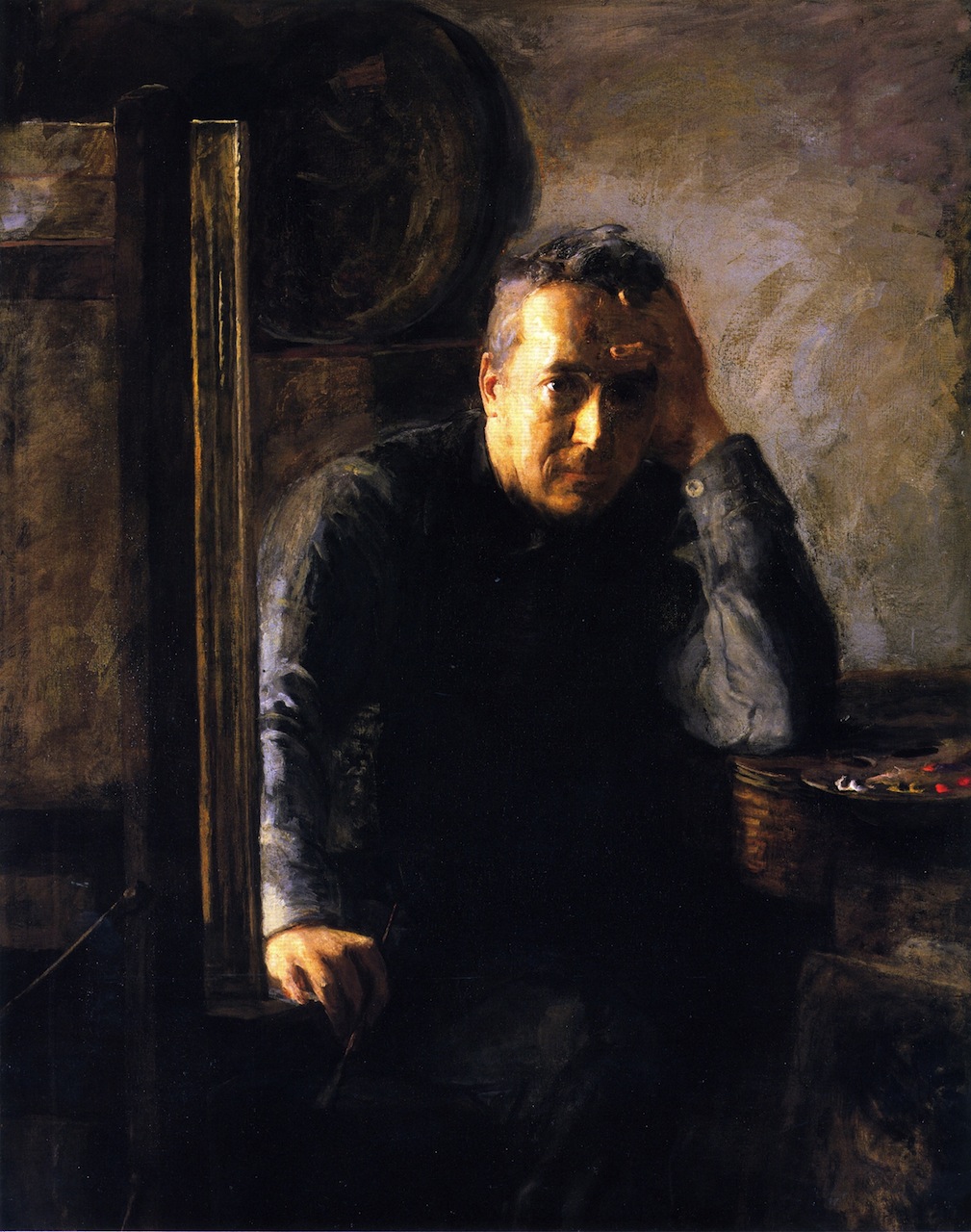 Too much art is judged by people without vision, those who often can’t bear to look, and just hide their eyes. The art and career of Thomas Eakins (1844–1916) was repeatedly thwarted by narrow-minded and blinkered Philadelphians, and it’s only over time that his paintings have been fully appreciated. He was one of few Americans at the time who gained admission to the École des Beaux-Arts in Paris, where he was a pupil of Jean-Léon Gérôme and Léon Bonnat.

Arriving back in Philadelphia in 1870, he embarked on a group of rowing scenes, which came to a total of eleven oils and watercolours.

Eakins’ first masterpiece is The Champion Single Sculls (Max Schmitt in a Single Scull), which he painted in 1871, and remains an astonishing work. His friend and successful rower Max Schmitt is in the nearest boat, and Eakins (a keen oarsman himself) is the figure in the further single scull. It’s meticulously detailed, even down to the puddles in the water made by Eakins’ oars as he rows into the distance, and its clouds are calligraphic.

This was shown among the first of his paintings to be publicly exhibited in Philadelphia, but its theme of a modern sport was felt to be a shock to artistic convention.

Four years later, Eakins painted himself into another controversy, in one of the major works of nineteenth century art, known popularly as The Gross Clinic.

Portrait of Dr. Samuel D. Gross (The Gross Clinic) (1875) is a portrait of this eminent professor of surgery at work in a teaching theatre at Jefferson Medical College, Philadelphia, where Eakins had studied human anatomy before going to France. The operation, a conservative procedure to treat osteomyelitis of the femur, took place before the advent of aseptic technique, so instruments were clean but not sterile, and gloves and gowns weren’t worn. The patient, lying with their feet towards the viewer and their head under the anaethetist’s mask, would have been receiving a general anaesthetic using ether or chloroform.

Gross stands near the middle of the painting, a scalpel held in his bloodied right fingers. Behind and to the left is the only woman in the painting: not a nurse, but apparently the patient’s distressed mother. Although there was interest in initial photos of this painting, when he submitted it for exhibition the following year it was rejected as unsightly by the jury of the Centennial Exhibition in Philadelphia, and sent first to an Army hospital before returning to Jefferson Medical College – a common way of hiding a painting from public view. Its critics were incoherently excoriating of Eakins’ unsightly painting, as if swooning at the sight of a little blood.

Medicine, and surgery in particular, had advanced greatly during the middle of the nineteenth century. In other less squeamish places, these innovations were celebrated rather than hidden from sight.

Henri Gervex’s Before the Operation, painted just over a decade later in 1887, shows the eminent French surgeon Dr Péan about to operate on a woman, and teaching a group of other doctors.

Prior to the introduction of general anaesthesia, surgical procedures were severely limited in what they could tackle. Robert C. Hinckley’s Ether Day, or The First Operation with Ether, painted some time between 1882-93, recreates the scene on 16 October 1846 in what is now known as the Ether Dome in the Massachusetts General Hospital, Boston, MA. Here John Collins Warren is removing a tumour from the neck of a local printer, Edward G Abbott, who was anaesthetised using ether – its first recorded use for a general surgical procedure.

In the autumn/fall of 1879, Eakins was appointed Professor of Drawing and Painting at the Pennsylvania Academy, and was promoted to be its Director in 1882. But his views on the importance of painting the nude were to get him into trouble there.

In 1885, Eakins painted Swimming (The Swimming Hole), appreciated today as another of the most important paintings in Americam art, and a masterpiece in the depiction of human form. There’s a deep irony in his choice of subject, which Eakins undoubtedly recognised. The same public who were shocked at a painting of naked people, or painting nude models in an art class, were quite used to seeing naked men swimming, even in public places – that was an accepted norm, so long as you didn’t take it into the studio or art class. This work was commissioned, and perhaps inevitably was refused, although Eakins was still paid in full.

The following year he was forced to resign from the Pennsylvania Academy because of his insistence on allowing his students to work from completely nude models, even when his class contained female students.

Previous experience with the reception of The Gross Clinic had perhaps discouraged Eakins from painting again in medical settings, but in 1889 students from the University of Pennsylvania School of Medicine persuaded him to accept a commission to paint their retiring professor of surgery, Dr. David Hayes Agnew. Eakins worked long hours to complete The Agnew Clinic (1889) in the three months allowed.

This fine painting shows how surgery had advanced in just fourteen years. Under the bright artificial light in the middle of the teaching theatre, the surgeon is performing a partial mastectomy. The patient is here shown at a more conventional angle, and no incisions are visible. The surgeons now wear gowns, although full asepsis with gloves, hats, etc., had yet to be introduced. A similar volatile liquid general anaesthetic is being used, administered via a mask.

The only woman present, apart from the patient, is now a nurse, Mary Clymer, although nurses had not yet developed specialist operating roles, and she is dressed for the ward, not handling instruments. The figure at the far right, on the edge of the canvas, is Eakins, allegedly painted by his wife, who was also an accomplished artist.

Despite the care that Eakins had taken to avoid the problems of his previous painting, this work was also rejected by the Society of American Artists, and brought about his resignation from that society in 1892.

At the time, Thomas Eakins didn’t receive the recognition he deserved, but in 2006 The Gross Clinic was rescued from sale to a private collector for the sum of $68 million.