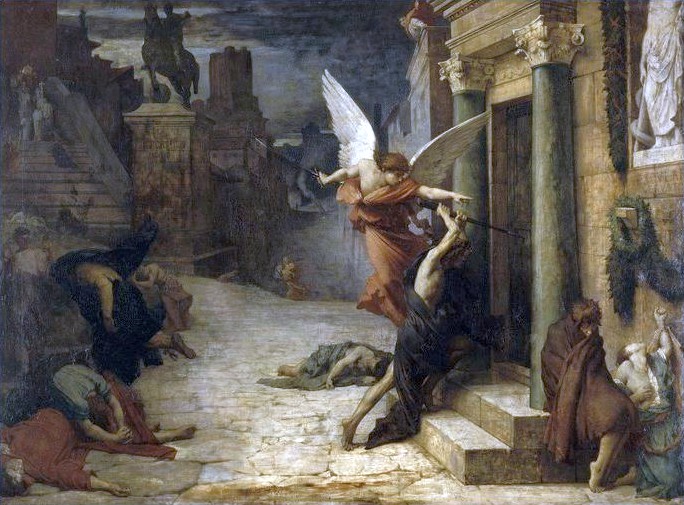 There’s only one island in the River Tiber where it runs through the city of Rome: Tiber Island. In the classical city, it’s just to the south-west of the Capitoline Hill, and not far from the Forum either. It’s also the site of the temple to Aesculapius, long since vanished, and part of a curious legend about the early city.

After the Battle of Sentium in 295 BCE, there were three years of plague and famine, which were only brought to an end when the cult of Aesculapius was brought from Epidauros to Tiber Island, the location apparently chosen by the sacred snake itself. The legend of how this happened is told by Ovid in his Metamorphoses. This plague apparently brought ‘a consumption that dried up the blood’ and many deaths. The physicians of the day were unable to bring any relief, so the Romans consulted the Oracle at Delphi. The answer came:
“What you are seeking here,
O Romans, you should seek for nearer you.
Then seek it nearer, for you do not need
Apollo to relieve your wasting plague,
you need Apollo’s son. Go then to him
with a good omen and invite his aid.”

Recognising that the son of Apollo to whom this referred was Aesculapius (Asclepius), the Senate despatched a party to the port of Epidaurus in quest of the god. The envoy leading that mission had a dream one night, in which he saw Aesculapius beside his bed, holding his rod around which a snake was entwined. The god told the envoy that he would change into a larger snake, for the Romans to find and take back with them.

Sebastiano Ricci’s The Dream of Aesculapius from about 1718 shows Aesculapius clutching his rod with snake in his right hand, appearing in a pall of smoke to the Roman envoy at Epidaurus.

The following morning, the Romans gathered at the god’s temple, where they saw a large golden snake, which the priest told them was the god himself. The snake promptly slithered down to the port, where the Roman ships were berthed. It boarded one of them, so the Roman party set sail to take it back to Rome with them.

Ovid provides a long illustrated list of the places that they sailed past in their return journey, including a stop at Antium during bad weather. The ships finally sailed up the River Tiber to the city of Rome, where they were greeted by great crowds. The serpent god took one look at the city and picked Tiber Island for its residence, where it brought an end to the epidemic which had been killing so many.

By the time that Gaspar van Wittel painted this View of Tiber in Rome in 1685, the temple to Aesculapius had all but vanished. In the first century, travertine blocks had been assembled to form the island into a ship, whose prow contained vestiges of the former temple, and those were all that remained.

Giovanni Piranesi shows this ‘prow’ more clearly (above), and below in more detail. Carved into the rock is the unmistakable form of the serpent wound around Aesculapius’ rod, marking the site of the temple.

This wonderful oil sketch of the island was painted by the young Camille Corot during his first stay in Rome, between 1825-28, in his Island and Bridge of San Bartolomeo, Rome.

Several paintings of plague and epidemics have placed Aesculapius in his role of physician and healer.

A drawing attributed to Jacques-Charles Bordier du Bignon, Aesculapius Routing Death (1822) is a classical fantasy. Aesculapius has two rods, with which he is despatching the ‘grim reaper’ of Death. The woman to the right of Aesculapius has been thought to be Ceres (Demeter), as she is pouring out her breast milk to feed the starving.

This is an unusual association: Aesculapius is more commonly seen with one of his daughters, Hygieia, the goddess of health and sanitation, although the woman is here not acting in that role.

Jules-Élie Delaunay’s The Plague of Rome (1869) is based on the description in The Golden Legend, a mediaeval compilation by Jacques de Voragine, of plague raging in the city. A pair of angels were claimed to have appeared, one good, the other bad. The good angel then gave the commands for people to die of the plague, and the bad angel carried those commands out. At the right edge of the canvas, the white statue appropriately shows Aesculapius.

It’s thought that Delaunay based this painting on a fresco in the basilica of San Pietro in Vincoli, which shows the plague in Rome in 1476. It was quickly popularised following exhibition of the painting in the Salon du Palais de l’Industrie in Paris, in the print below, and Delaunay’s painting was bought by Napoleon III for the public collection.

Aesculapius wasn’t done yet. In 1584, a hospital was built on Tiber Island, and has been staffed ever since by the Hospitaller Order of Saint John of God. In 1943, it was used for sheltering Jews when they were being rounded up by the SS. All because of a legendary golden snake.