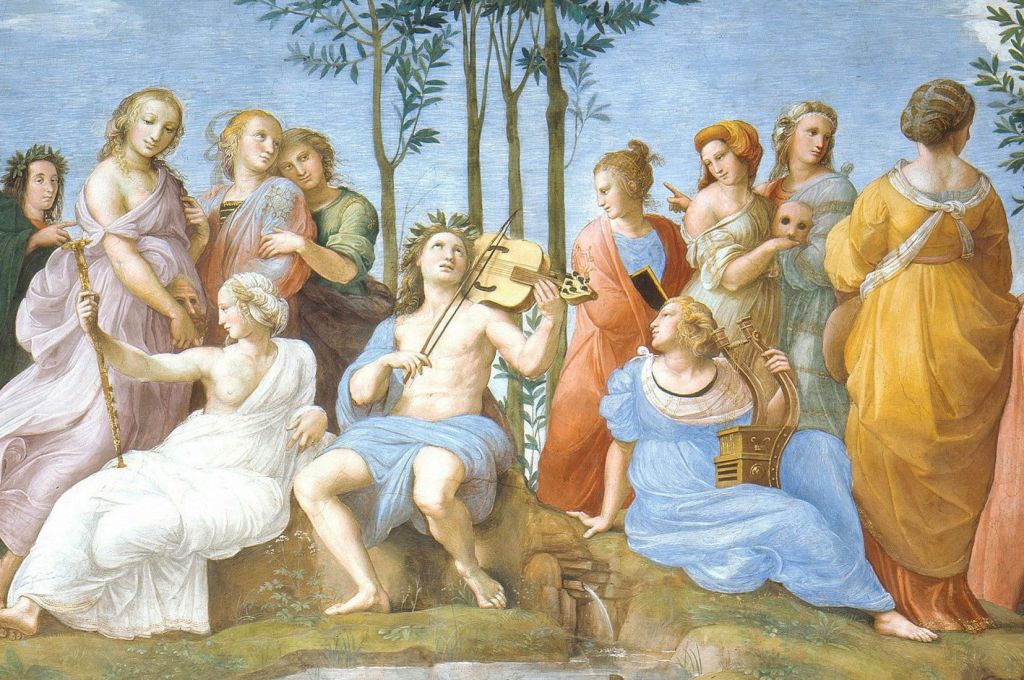 Zeus may have been the senior of the deities, their captain, but among the most important and popular with the Greeks and Romans, and later with artists, is Apollo, son of Zeus by the goddess Leto/Latona. As the time for the birth of her twins drew near, Leto hid from the jealous Hera, and delivered them herself in Lycia.

Apollo (Greek Ἀπόλλων and one of the few deities to have the same name for the Romans) may be junior to Zeus, and not have any thunderbolts, but his responsibilities are very broad, including music and dance, archery, prophecy, healing, the Sun (whose chariot he commands), and poetry. He is twin brother of Artemis the huntress, a beardless young man, and the epitome of male beauty. His most common attribute is the lyre, his constant companion for both music and poetry.

Originally, there was clear separation between Apollo and Helios, the Titan god of the sun. In more recent times, they became conflated, into Phoebus Apollo, as shown in Gustave Moreau’s Chariot of Apollo from about 1880. This shows Apollo driving his sun chariot.

From 1905, Odilon Redon painted several different versions of Apollo, and his ill-fated son Phaëthon, who lost control of the chariot and had to be struck down to save the world from destruction. This version, The Chariot of Apollo, dates from 1905-16, and refers to that well-known myth.

Apollo is the lead in many myths, including the events which followed the devastating flood which left only Deucalion and Pyrrha alive among mortals. Ovid tells us that all other life was restored by spontaneous production from the fermenting mud left by the flood, under the rays of the sun, providing the combination of the ancient elements of heat and moisture.

One of the creatures so created was the huge and monstrous serpent Python, which brought fear to mankind. As a conclusion to the story of the flood, Ovid writes that the god Apollo “destroyed the monster with a myriad darts” from his bow. To celebrate the death of Python, Apollo instituted the Pythian games, but because the laurel had not yet been created, its victors were awarded crowns of oak leaves, not laurels.

On of the most spectacular paintings of any Ovidian story is Eugène Delacroix’s huge mural of Apollo Vanquishing the Python (1850-51) in the Louvre. Apollo is seen in the centre, in his sun chariot, with another arrow poised in his bow and ready to strike Python, at the bottom of the image.

Gustave Moreau’s Apollo Vanquishing the Serpent Python from 1885 lacks the grandeur but tells the same story.

Probably the best-known of the classical oracles, that at Delphi, was located at an ancient place named Pytho, considered to be the centre of the earth. In an alternative account, the Python was the dragon who guarded the precious stone, or Omphalos, marking this sacred point. Apollo took a dislike to Python, possibly because of its previous actions pursuing his mother Leto. The god came and fought Python, killing the dragon, so enabling Apollo to make Delphi his own.

Apollo and his twin sister Artemis are known for their skill at archery. When the mortal Niobe was foolish enough to boast of her children against the twins’ mother Leto, the pair were unleashed to use Niobe’s fourteen children for target practice.

The story of Niobe also proved unfortunate for Jacques-Louis David. In 1772, it was the second year that David had entered the Prix de Rome, and he was so shocked that his Apollo and Diana Attacking the Children of Niobe (1772) wasn’t the winner that he went on hunger strike for a couple of days. He was eventually persuaded to resume eating and painting, failed a third time the following year, but was finally successful in winning the prize in 1774.

David’s canvas is a mass of dead bodies, sheltering daughters, horses, carnage, and death. Amid all this Niobe stands, her right hand held up to the gods, imploring them to spare her last remaining daughter. Apollo still seems busy with his bow, although Artemis has finished her task.

Like many of the classical deities, Apollo had a vicious streak himself. This is most manifest in the horrific punishment he inflicted on the satyr Marsyas.

Marsyas picked up the aulos, a double-barrelled wind instrument, which had been abandoned by Athena and taught himself to play it. He became so good that he challenged Apollo to a musical contest, lost inevitably, and the god punished him by having him flayed alive.

Tiepolo’s Apollo and Marsyas (1720-22) takes the contest as its theme. It’s easy here to mistake the figure sat on the rock throne as being Apollo, but he is actually the youth at the left, bearing his lyre, wearing a wreath of laurel, and given a gentle divine halo.

Thus the figure apparently wearing a gold crown sat in a dominant position must be Marsyas, clutching a flute (of sorts, not really an aulos here) in his right hand. To the right are some of the Muses, one of whom covers her eyes in despair. She knows what Apollo’s pointing arm is about to inflict on the usurper Marsyas.

Apollo appears in a number of set piece paintings, among which is a gathering of Muses on Mount Parnassus. Its most famous example is the last of the three magnificent frescoes painted by Raphael in the Stanza della Segnatura in the Vatican.

Parnassus is thought to have been completed by 1511 according to an inscription below the window. Apollo is at its centre, bowing a string instrument and looking upward for inspiration. Surrounding him are the full set of nine Muses, who mostly defy individual identification.

Many other compositions of Apollo with the Muses were painted over the following centuries. From among them I have selected Gustave Moreau’s The Muses Leave Apollo, their Father, in Order to go Forth and Enlighten the World from about 1868.

Several studies exist for this beautiful and intricate painting, but this version in oils remained in Moreau’s studio throughout his life, and he continued to work on it fitfully. In 1882 he started to enlarge the canvas, and that appears to have been completed.

Its narrative is extremely simple, and related in its title: the Muses, of epic poetry, lyric poetry, history, song, tragedy, hymns, dance, comedy, and astronomy, are here leaving Apollo, generally held to be their father, to bring inspiration to the human world.

Of the gods whose love affairs Ovid describes in his Metamorphoses, Apollo seems the least successful. After his achievement in killing Python, he takes the mickey out of Cupid over his use of the bow and arrow, calling him a mischievous boy, and claiming that only a real man (like him) should try to use them. Cupid responds in kind, claiming that his bow will vanquish even Apollo. He then flies to the top of Mount Parnassus, and looses two arrows: a golden one aimed at Apollo, to inflame him with love for Daphne, who is struck by a special lead-tipped arrow, which turns her off any amorous advances.

The stage is set for the first of Ovid’s many tales of attempted rape or seduction. Apollo is completely smitten with Daphne, a naiad or water-nymph, but Daphne wants nothing to do with him. Even before she had been struck by Cupid’s lead arrow, she had resolved to remain a virgin, rejecting every suitor, and events only strengthen her resolution.

His heart on fire for her, and his mind wondering dangerously towards raw lust, Apollo starts to chase Daphne through the countryside. As he runs he breathlessly tries to persuade her to stop and give in to his desires, but she keeps running just out of his reach. Eventually the pair tire and Apollo catches her just as she is being transformed into a laurel tree.

Tiepolo’s famous Apollo and Daphne (c 1744-45) brings in Cupid, who is somewhat immodestly sheltering from his victim Apollo beneath Daphne’s billowing robe. In front of them, his back to the viewer, is Daphne’s father, the river god Ladon, who carries his oar as an attribute. Daphne’s transformation is at an early stage, the fingers of her right hand sprouting leaves, but it’s obvious what is just about to happen. It’s also noteworthy that Apollo wears a crown of laurels, rather than oak leaves.

In addition to a long list of female lovers, Apollo has several males, among them Hyacinth, a Spartan prince. In a terrible sporting accident, Hyacinth is struck by a discus thrown by Apollo, and suffers a fatal wound to his head.

It was Jan Cossiers, then assisting Rubens in some of his remaining projects, who made a finished version of Rubens’ original oil sketch of The Death of Hyacinth in 1636-38. Under the dying youth’s right shoulder, there are perhaps the first signs of plants growing in his blood, although they aren’t yet recognisable as hyacinth flowers.