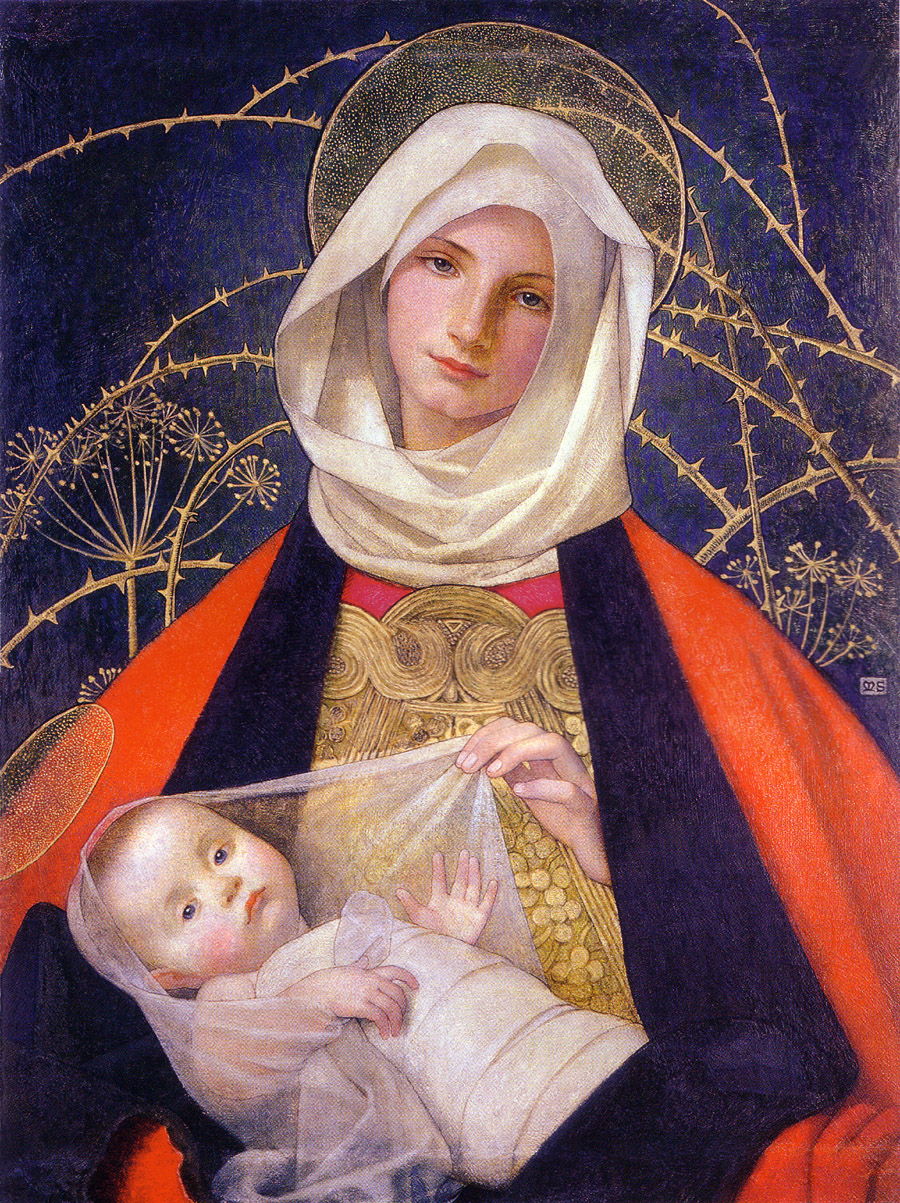 By the time that Marianne Preindlsberger (1855-1927) was born in 1855, the Pre-Raphaelite Brotherhood had largely dissolved. As she was born in Graz, Austria, it seems unlikely that she would have seen any high Pre-Raphaelite art until much later in her studies. She painted in a loose realist style, then Naturalist, before turning to Impressionism. But from about 1893 she made paintings which are overtly Pre-Raphaelite, even using egg tempera. She is of course better known as Marianne Stokes, wife of the British painter Adrian Stokes.

Preindlsberger was born in Graz, Austria, and in about 1870 studied at the Graz Drawing Academy, where she won a scholarship to go on to Munich in 1874. Among her teachers there were Gabriel von Hackl, Otto Seitz, and von Lindenschmidt. While in Munich, she is believed to have met the composer Johann Strauss (1825-1899), who dedicated a polka-mazurka, Licht und Schatten (Light and Shadow, Opus 374), to her in 1875.

Her family fell on hard times, forcing Preindlsberger to earn a living from her painting. She moved to Paris in 1880, where she attended the Trélat and Colarossi Academies. She also studied under Pascal Dagnan-Bouveret (1852-1929), one of the Naturalists whose paintings were becoming increasingly popular at that time.

The Milk Pot (before 1884) is perhaps a little painterly for Naturalism, but its motif is more mainstream.

In 1881, she made friends with the Finnish painter Helene Schjerfbeck, and went with her to the artists’ colony at Pont-Aven in Brittany, in 1883. There she met the young British painter Adrian Stokes. Later that year she had her first painting accepted for the Salon, and the following year married Adrian Stokes in Graz, later travelling and staying for several months in Capri.

Homeless (On the Way to the Fields) (1885) is an example of her rural Naturalism, under the influence of Bastien-Lepage and Millet, at this time in her career. It parallels the rural paintings of George Clausen at that time.

The Stokeses spent the summer seasons with the group of Danish Impressionists at Skagen in Denmark, in 1885 and 1886, where they became close friends of the Anchers. In 1885, she had her first painting accepted for exhibition at the Royal Academy in London.

They returned to England in 1886, where the following year they became early members of the New English Art Club, and travelled to Italy. They settled near St Ives in Cornwall in 1887, where they became active members of its developing artists’ colony, Marianne being a member of the Newlyn School.

For a while, she also painted in Impressionist style, as seen in her In the Meadow (In a Field of Buttercups) (c 1890).

In 1890, she exhibited in Munich, winning a gold medal, and in 1893 she won another gold medal for her paintings shown at the Chicago World Fair.

Her mature work consisted of portraits, some of which are now in the National Portrait Gallery, London, and religious works, which became more strongly influenced by the Pre-Raphaelite movement. Among the latter is her Angels Entertaining the Holy Child (1893).

She started to paint in tempera from about 1895, and progressively abandoned oils, becoming a member of the Society of Painters in Tempera in 1905.

Her overtly Pre-Raphaelite The Queen and the Page (1896) was engraved by Franz Hanfstaengl, making her first print.

Continuing with a Pre-Raphaelite interest in the mediaeval, her Aucassin & Nicolette (1898) shows the romance between a knight, son of Count Garin of Beaucaire, and a Saracen maiden. This was told in an anonymous 12th or 13th century French chantefable (sung story). She probably learned of this story from a translation which was published in 1887, or a plot summary in an anthology of 1896.

Among her most beautiful paintings in tempera are several classical versions of the Madonna and Child. This example is thought to have originated in a study she made when visiting what is now Croatia in 1907.

Her Madonna and Child with Symbols from a Litany (c 1905) was set in an elaborate devotional Spanish frame, and first shown at the first exhibition of the Society of Painters in Tempera in 1905.

In 1908, she helped design and make banners for the Women Suffrage Procession to the Albert Hall.

In 1905, the couple made their first visit to Hungary, returning in 1907 and 1908. Their many paintings from these travels were exhibited from 1907 onwards, and in late October 1909, their book (see references) was published by A & C Black. The following two works have been taken from that: although their quality is more limited than I would like, they form a unique record of the country deep into the Austro-Hungarian Empire before it fell apart as a result of the First World War.

There are many more of their paintings included in their book; I have given both their dates as 1909 in the absence of any better information, although they may well have been completed as early as 1905.

Her Death and the Maiden (1908) is reminiscent of Horace Vernet’s The Angel of Death (1851), a sadly popular theme at the time.

In 1912, she designed a tapestry for (William) Morris and Company, which was exhibited across Europe.

During the couple’s travels, they became friends with John Singer Sargent, with whom they started to travel and paint. At the outbreak of the First World War in 1914, they were travelling with him in Austria, which was then at war with Great Britain. The group was forbidden from leaving Austria, but by mid December had managed to reach Switzerland.