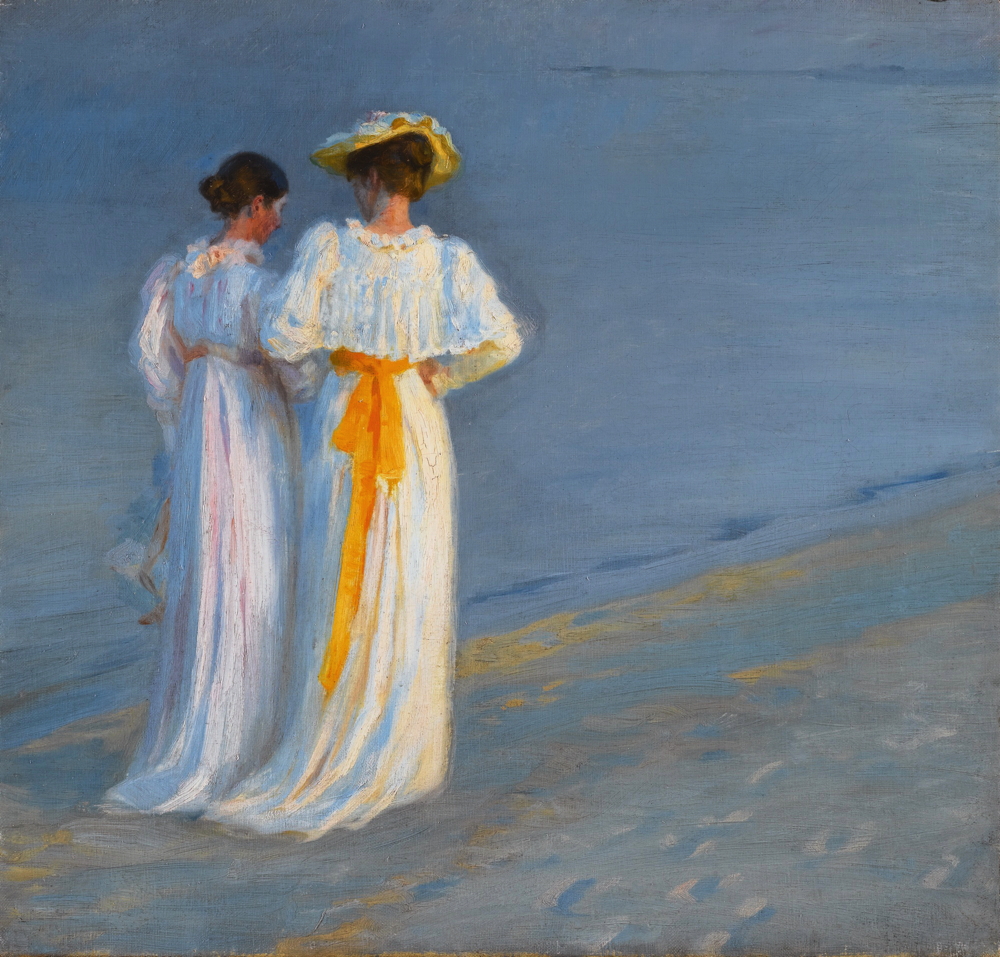 Initially formed by Karl Madsen and Michael Ancher in the summer of 1874, this group of painters started meeting at Brøndums Gastgiveri, a guesthouse in the fishing village of Skagen, on the northern tip of Jutland (Jylland), Denmark. The group was initially reacting to the fixed styles of Historicism and Neoclassicism being enforced by the Royal Danish Academy of Fine Arts (where Ancher, Madsen and Johansen studied) and the Royal Swedish Academy of Arts.

In 1875 they were joined by Johansen, and over the following two summers others joined too. Ancher married Anna Brøndum from the guesthouse in 1880, and Krøyer joined the group and became its unofficial leader in 1882. The Anchers lived in Skagen from 1880, Krøyer from 1894, and Tuxen from 1901. With the death of Krøyer in 1909, their traditional gatherings came to an end, but younger Danish and other Nordic painters continued to visit.

Among the group were:

From the left, moving around the table, this painting shows: Martha Møller Johansen, Viggo Johansen, Christian Krohg, PS Krøyer, Degn Brøndum, Michael Ancher, Oscar Björck, Thorvald Niss, Helene Christensen, Anna Ancher, Helga Ancher. Whilst this may appear a spontaneous record of an actual event, in fact it was over four years in the painting.

Although popularly known as Danish Impressionists, most of the early work of the Skagen Painters was realist, and much of it genre scenes of fishing and the fishing community. However I have chosen three of the best of the group who showed most visible influence from Impressionism, and whose work remains accessible. You will find others represented in the many excellent art museums across Denmark, particularly that in Skagen.

She was born and brought up in Skagen, the daughter of the owner of Brøndum’s Guesthouse, and attended the private Vilhelm Kyhn College of Painting for women in Copenhagen from 1875. She married Michael Ancher in 1880, having one daughter, Helga, and they bought their house at Skagen in 1884.

She completed several paintings with her husband, Michael, and they visited Paris together for six months in 1888-9, where she studied with Pierre Puvis de Chavannes, alongside Marie Triepcke, who was to marry PS Krøyer.

Her skills as a colourist and impressionist shone through in her solo works, as she progressed from realism after 1890 and became increasingly painterly in her brushstrokes. She was also influenced by Degas’ use of unusual angles and cropping, possibly reflecting some of the contemporary trends in photography.

Her subjects, like those of Berthe Morisot, were generally the intimacies of everyday family life, and she painted many women engaged in their everyday work such as sewing and knitting, supporting the fishermen whose lives were portrayed by others in the group.

Born in Stavanger, Norway, he was fostered by his aunt and uncle in Copenhagen. A precocious artist, he completed studies at the Royal Danish Academy of Art in 1870, at the age of just 19. In 1874 he sold his first painting to the Hirschsprung family, which established a long relationship with them as patrons.

From 1877 he travelled widely in Europe, studying under Léon Bonnat in Paris and seeing Impressionist paintings there. He visited Spain in 1878 to study the works of Velázquez, and visited Pont-Aven and other artists colonies in Brittany. He exhibited in the Paris Salon in 1879 and some subsequent years in the 1880s. He returned to Denmark in 1882, and spent his first summer in Skagen, concentrating on painting fishing and marine motifs.

Over the winters he painted commissioned portraits in Copenhagen, and continued to travel. He purchased his first camera in 1885, and started using that to record scenes which he later painted. When in Paris in 1888 he met Marie Triepcke, a very talented German painter who went on to open new possibilities for women in art, and they married the following year.

By about 1900 his eyesight began to fail noticeably, but he continued to paint almost to the end, dying in 1909.

Brought up in Copenhagen, he studied at the Royal Danish Academy of Art alongside PS Krøyer. He first visited Skagen in 1870, and returned on many subsequent summers. He also travelled widely through Europe painting commissioned portraits, including those of royal families such as Christian IX of Denmark, Queen Victoria, and Czar Nicholas II. In 1875 he went to Paris to study under Léon Bonnat, a couple of years before PS Krøyer did.

He was the first head of the Artists Free Study School, intended as an alternative to the Royal Danish Academy, in the 1880s, when he also spent considerable periods in Paris. His first wife died of TB, and he married Frederikke Treschow in 1901 (see her portrait by PS Krøyer above). Together they purchased a summer residence in Skagen. He was also an accomplished sculptor.

The range of works illustrated in Berman’s book and the websites listed below is substantial, and as a group these must be some of the finest impressionist paintings outside the central French group. These works are rich in light and colour, strongly evocative of one of the most successful artists colonies of the nineteenth century, and include some of the most lyrical paintings of the whole century.

The best opportunity to see them is in the large collection of Skagens Museum; thankfully there have been several substantial exhibitions in Danish and other Nordic galleries, but very few outside the region. An exhibition devoted to the group as a whole may not be as lucrative to galleries in the rest of Europe or North America, but would be a real eye-opener, I think.

Berman PG (2007) In Another Light. Danish Painting in the Nineteenth Century, Thames & Hudson. ISBN 978 0 500 23844 8. (A thorough and extensive account of the whole century, with more than 30 pages devoted to the Skagen Painters. Superbly illustrated, with some full spreads. Highly recommended.)